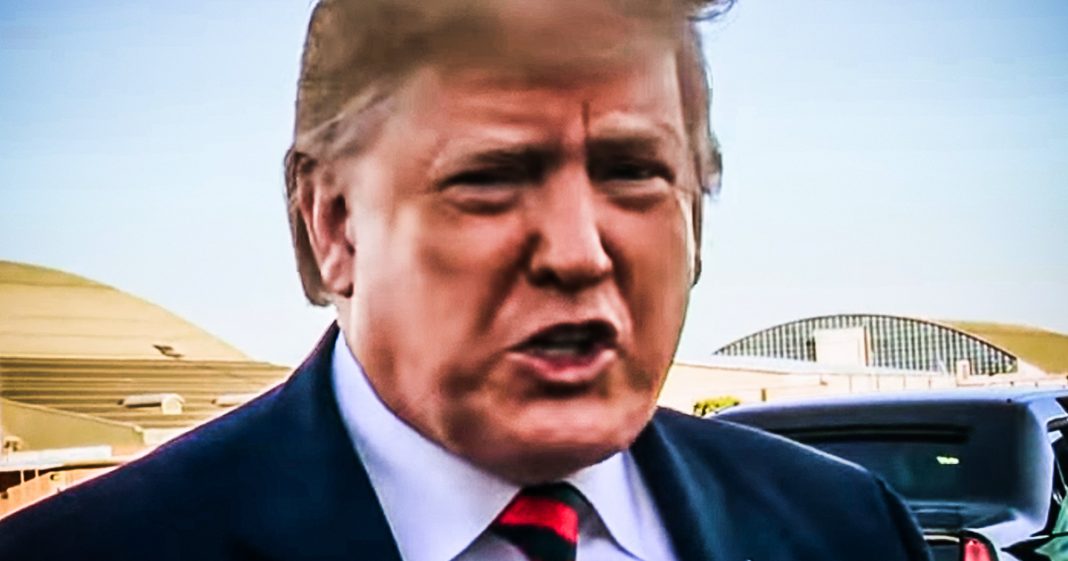 According to reports, at least a dozen current and former White House staffers have already testified as part of the impeachment inquiry, and those staffers are lawyering up because they fear for their own futures. When the people who know what you did start fearing they may go down, it only gives them more incentive to roll on you, as Ring of Fire’s Farron Cousins explains.

*This transcript was generated by a third-party transcription software company, so please excuse any typos.
According to a new report in Politico, at least a dozen current and former white house officials have been called to testify and have testified, uh, as part of the ongoing impeachment inquiry in the house of representatives and these dozen current and former officials are also scrambling to hire lawyers because they’re also afraid that they’re going to go down with the ship here. What’s more than that is you have other officials in the white house and they point out that these are mid level officials, not, you know, just the people who make the copies or the coffee, mid level officials who are also lawyering up right now because they don’t want to get embroiled in this scandal either. And to top it all off, they’re all trying to stay off of TV and out of the reach of reporters because they don’t want to say something publicly that is then going to lead to a subpoena for them to have to go and testify in front of the committee. Now there’s also another problem back in the Muller days, the Trump administration, Trump campaign, whoever it was, they had did set up a legal defense fund for staffers to draw out of in case they got called in needed to hire lawyers, yada yada. They have not done that this time, so all these staffers and mid level officials are a little concerned because they don’t know how they’re going to pay for a $1,500 an hour high price DC lawyer to represent them should the need arise and for at least a dozen of them, the need has already arisen and they’re having to pay for this themselves. Here is my analysis of all of this insanity happening at the white house. Obviously you have some officials who have no idea really what’s going on at all. They weren’t involved with this, but they understand the chaos that comes with working for Donald Trump. They want to hire lawyers just to protect themselves because they don’t want to get involved. This whole thing they think is silly. It’s crazy. It didn’t involve me. Don’t call me, but then you have the others. You have the others who did hear the phone call, you had the others who were told to go hide that transcript on that secure server. Oh, and by the way, edit out some of the parts where we talked about Joe and Hunter Biden. Those are the people who are very concerned. They’re hiring lawyers, not because they don’t want to get involved, but because they understand that the defensive I was just following orders isn’t going to fly and they know that they’ve done things that are wrong. They know the president has done things that are wrong and they need to get the best lawyers that they can to prevent them from going to prison and those are the people that we need to focus on. Those are the people that the house Democrats need to start putting a little bit of pressure on because if they’re already afraid, afraid for their future, afraid for their freedom, those are the people most likely willing to flip. Those are the people most likely to go in there and give up information to save their own skin. And those are the people that the Democrats need to issue subpoenas to immediately because they were there, they were present. They know what’s going on, and they don’t want to go to jail for this guy. And I think this is how the end of this story is gonna end up playing out, whether it’s six months from now or a year from now, it’s going to be some mid level officials who know they did something wrong, but they don’t want to get in trouble. And so they’re going to try to cut a deal and they’re going to say, listen, I don’t want to go to jail. I don’t want to lose everything I’ve built for my entire life. I’m going to tell you everything that happened, but you got to give me immunity. Democrats need to be cutting deals like that left and right, because these people know what happened and they’re the ones who can give us the missing bits of information that could very easily l