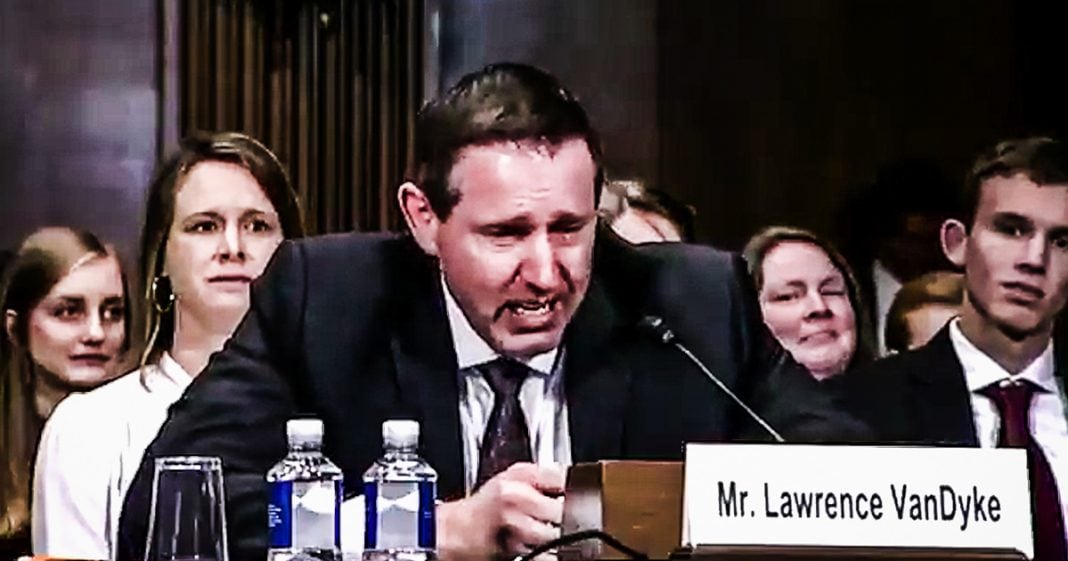 Trump judicial nominee Lawrence VanDyke began crying during his senate hearing before his confirmation after he was confronted with his own record of being a horrible human being. VanDyke’s crocodile tears were the product of the ABA sending a letter to the Senate warning them that he was unqualified, lazy, and a threat to certain minorities. Ring of Fire’s Farron Cousins discusses this.

*This transcript was generated by a third-party transcription software company, so please excuse any typos.
So yesterday was an interesting day during the, uh, Senate judiciary committees, uh, questioning of Lawrence Vandyke, who Donald Trump has nominated to a lifetime appointment on a federal bench during his, uh, answers. Mr Vandyke grew just a little bit emotional, probably more emotional than you’d like to see in a federal judge to be honest with you. And it’s because he had been criticized by the American bar association and that criticism that they offered for mr Vandyke was enough to make him burst into tears during his testimony. Here it is.
[The letter also says that you would not commit to being fair to litigants before you notably members of the LGBTQ community. Can you speak to that? Did you, did you say that you wouldn’t be fair to members of the LGBT community? Senator I, that was, um, that was the part of the letter. I did not say that. I apologize. It’s all right. Sorry. No, I did not say that. I do not believe that it is a fundamental belief lie that all people are created in the image of God. They should all be treated with dignity and respect, Senator.]
You know what I mean? I guess that’s a good break from, you know, when we had Brett Kavanaugh all shouting and screaming about how much he liked beers. So I guess it is better to see a dude just crying because he swears he doesn’t hate certain sections of the U S population. But for those who are wondering, this is what the American bar association had to say about mr Vandyke. They said, and this was a letter sent Tuesday evening to the honorable Lindsay Graham, chairman of the committee of the judiciary on the United States Senate. Uh, mr VanDykes accomplishments are offset by the assessments of interviewees that mr Vandyke is arrogant, lazy, and Idealog and lacking in knowledge of the day to day practice including procedural rules. There was a theme that the nominee lacks. Humility has an entitlement temperament does not have an open mind and does not have a commitment to being candid and truthful. Some interviewees raised concerns about whether mr Vandyke would be fair to persons who are gay, lesbian, or otherwise part of the LGBTQ community. Mr Vandyke would not say affirmatively that he would be fair to any litigant before him, notably members of the LGBTQ community. So they, uh, the ABA did 60 interviews with people who know Larry Vandyke, and this is the assessment they came up with. He’s arrogant, he’s lazy, he doesn’t know how the law works. Oh. And by the way, he won’t admit that he’ll be fair to people, especially if they’re part of the LGBTQ community. And when confronted with that information during his questioning, he sobbed like a child. Maybe he sobbed because he didn’t know this letter was sent. Maybe he was sobbing to find out what his buddies actually think of him. Or maybe he was sobbing because for the first time in his life, he had to answer for his own words in actions. You know, powerful men like this, we see it all the time. They act like jerks. They’re attire a- entire life. As the ABA said, he’s got a sense of entitlement, right? These powerful, wealthy white guys have this sense of entitlement. They don’t ever get held accountable for anything cause they feel they’re entitled to whatever it is they want. And for once in his life, Larry Vandyke got confronted with that and it made him cry.