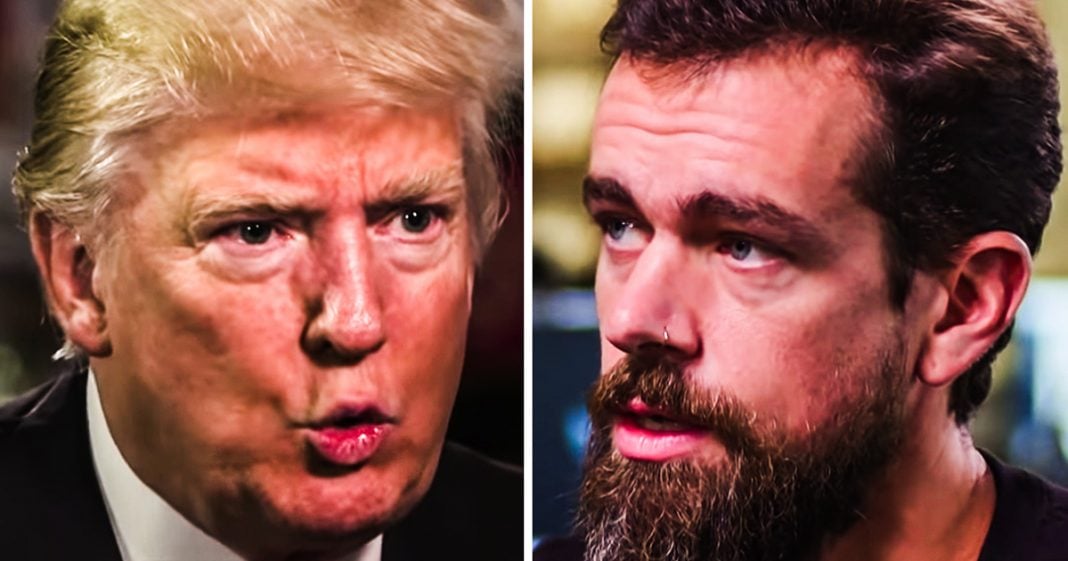 Donald Trump’s reelection campaign is furious over the fact that Twitter CEO Jack Dorsey announced that they would not be allowing ANY political ads to run on their platform. Brad Parscale, Trump’s campaign manager, blasted the decision as “stupid” saying that Twitter will lose millions of dollars. Sometimes it isn’t about the money, as Ring of Fire’s Farron Cousins explains.

*This transcript was generated by a third-party transcription software company, so please excuse any typos.
Yesterday, Twitter CEO Jack Dorsey made the announcement that Twitter will not be hosting any political ads during the 2020 election cycle. And as expected, there’s one group that is exceptionally furious over this decision and that happens to be Donald Trump’s presidential campaign. His 2020 reelection campaign manager, Brad Parscale, came out and said the following, he said, Twitter just walked away from hundreds of millions of dollars of potential revenue, a very dumb decision for their stockholders. Will Twitter also be stopping ads from bias, liberal media outlets who will now run unchecked as they buy obvious political content meant to attack Republicans. And Brad Parscale is not a smart human being because Jack Dorsey, contrary to what Parscale just implied there, didn’t say he was banning ads from Republicans. He said they were banding political ads, political ads, all of them, every one of them, Brad. But of course you want to make it seem like Republicans are being persecuted cause that’s what you guys do best. Play the victim whine about something that’s not even true and get people to feel sorry for you. But that’s not what’s happening here. And you know what? Sometimes for some companies, every now and then the principal is worth more than the money and they will be missing out on hundreds of millions of dollars. But they’re also not going to have to go through the kind of scrutiny and congressional hearings that Facebook is now going through. It’s gonna save them a world of pain. Now, here’s the flip side of this. As Ryan grim has pointed out, this is actually really, really bad for progressives and progressive candidates. And here’s why. Twitter is a massive tool, a very powerful tool that these young candidates, these unknown candidates, and even the progressive candidates like Bernie Sanders have been using to reach people, and Dorsey just took it away. So that is going to hurt these campaigns. It is going to hurt Progressive’s. It’s going to hurt, uh, progressive challengers to establishment incumbents. So that is something we have to deal with. But it’s not something that we can’t overcome because we can. And here’s how we do it. And Dorsey actually kind of explained this. He said, political reach and political influence should be earned, not bought. So let’s help them earn it. Let’s help them earn it. Folks, go out there and follow people and support people like Lauren Ashcraft, uh, Joshua for Congress, Albert Lee, Isaiah James, McKayla Wilkes, people like that. And there’s tons more whose names I can’t think of at the top of my head. I follow you on Twitter. I retweet you. I like what you have to say. And that’s what we all have do folks. That’s how we counter the fact that they can’t buy reach anymore to reach their constituents or potential constituents. Now it’s on us. So this is what we do. This is our call to action. We can beat them. We can do that by following these Progressive’s, by re-tweeting them, by telling everybody else to go and do the same thing. So yes, it may hurt Progressive’s because they can’t buy ads on Twitter. But that’s where we come in. It’s time for us to take a little bit of action too. We can’t leave it all up to them. It’s our turn. Go out there and make it happen.