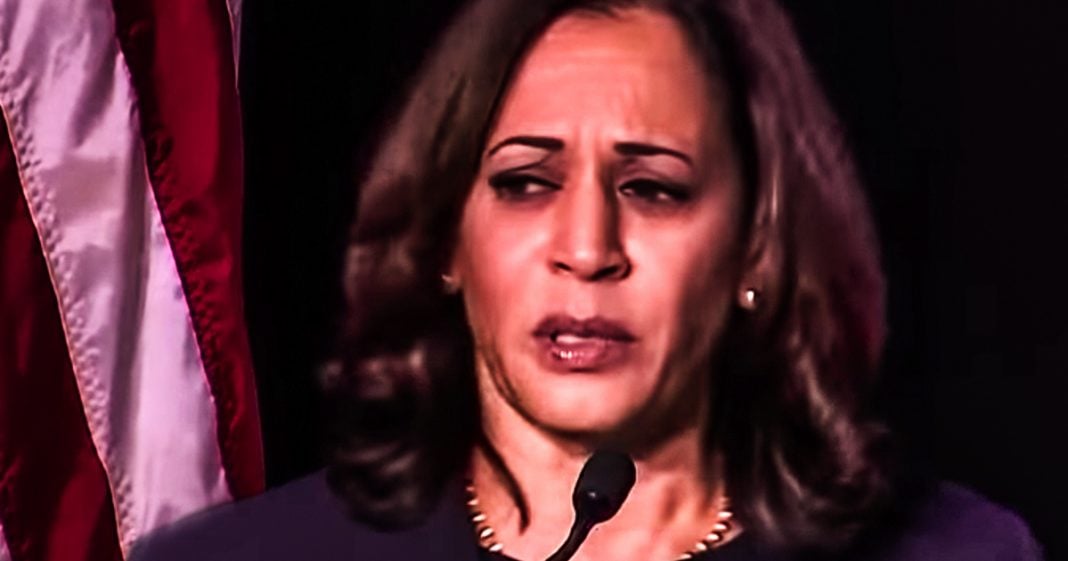 Kamala Harris is having to slash her staff for her presidential campaign as they are running out of both money and time to turn the whole thing around. The campaign is very clearly on life support at the moment, and it isn’t showing any signs that it could turn around. The problem is that she has no new ideas to offer, and doesn’t have the benefit of Joe Biden’s name recognition. Ring of Fire’s Farron Cousins explains what’s happening.

*This transcript was generated by a third-party transcription software company, so please excuse any typos.
Kamala Harris’s presidential campaign is in trouble right now and she knows it’s in trouble and she actually does have time to turn it around for any, uh, Harris supporters who happen to be watching this. Don’t worry she could still do it for everyone else watching this, who is not a fan of Kamala Harris, don’t worry, she’s not going to be able to do it. Here’s what’s happening in uh Harris land at the moment. Her campaign is running out of money. She has not had those big fundraising drive. She’s not pulling in a lot of money online. And even though she did 70 high dollar fundraisers over the spring and summer, she still managed to spend more cash than she brought in. And now at this point, as we’re getting that home stretch before Iowa, it’s starting to catch up with her. Right now, her campaign manager is having to take a pay cut from his $10,000 a month salary. He’s going to reduce that. Uh, all of the contractors that they’re working with, they now have to go back and renegotiate those contracts so they can pay them less again because they’re running out of money. And more importantly, she continues to fall in the polls. That’s the bottom line here. You know, she could have all the money in the world. Joe Biden’s got a ton of money. It’s not helping him with polling, but what she’s trying to do is restructure her staff, lay people off, she’s slashing dozens upon dozens of jobs and she sending some of her remaining people up to Iowa to kind of boost the ground game there while firing other folks. Campaigns in the past have done this and they have seen moderate success with it. But I don’t think that’s going to be the case with Kamala Harris here. And here’s why. Um, and this is actually brilliantly pointed out, um, by cohost of the, the Hill TV, uh, the show rising. And he mentioned the fact that, uh, it’s because Kamala Harris has nothing to offer that’s, that’s been her campaigns promise from day one or not promise problem from day one. She has nothing, you know, she’s out there kind of agreeing with other candidates on their plans, telling fun little folksy stories about struggle and hardship that she overcame, which is great, but that’s it. There’s nothing more to her campaign so she can restructure her staff. She can lay people off, people can take pay cuts, send more people to Iowa, whatever it is. The problem is Kamala you don’t stand for anything and the public sees that right now they see candidates like Bernie Sanders and Elizabeth Warren out there actually offering plans saying, I’m going to do X, Y, and Z. I’ve got day one plans. I’ve got executive orders ready written to go to sign on day one. If I get elected, Kamalas out here saying, that little girl was me. Well, fantastic. You do have a remarkable story and I’m not trying to take that away from you, but at some point you have to get past the personal stories. You have to get over the platitudes and you have to start saying, I’m doing this, I’m doing this, I’m doing this, and I swear to God, if anybody says, go look at her website, all of her stuff is there. It’s not my job, folks. Technically it is my job and I do that. I do that. Why don’t you go tell that to the people in Iowa? Yang’s people are really bad about that. Go look at his website. That’s not our job folks. It is the candidates job to inform the public of their positions. They want us to go to their websites, not to read about their positions, but to buy their crap, to donate money. That’s why that’s the first thing that pops up. Instead of, here’s what I think about climate change. Here’s what I think about Medicare for all. No, I’m not going to go to their website and look at their plans. They have the duty to go out there and explain them to us. Hillary Clinton’s folks said the same thing to me in 2016 go to her website if you want to see your plans. No. How about she discusses them at her next rally. How about she runs ads actually talking about issues instead of attacking Trump, Kamala Harris has fallen down that exact same trap, and as has have, quite frankly, a lot of the other candidates running for president right now. I understand it’s good to have websites and you have your plans out there and all of that ready to go for everybody. That’s awesome. And I do think people need to have that, but at the same time, if your whole position relies on your supporters telling others, just go to their website if you want through positions. That’s a losing campaign strategy and that means your candidate is pretty lazy and doing a really bad job at conveying what the hell it is they stand for.