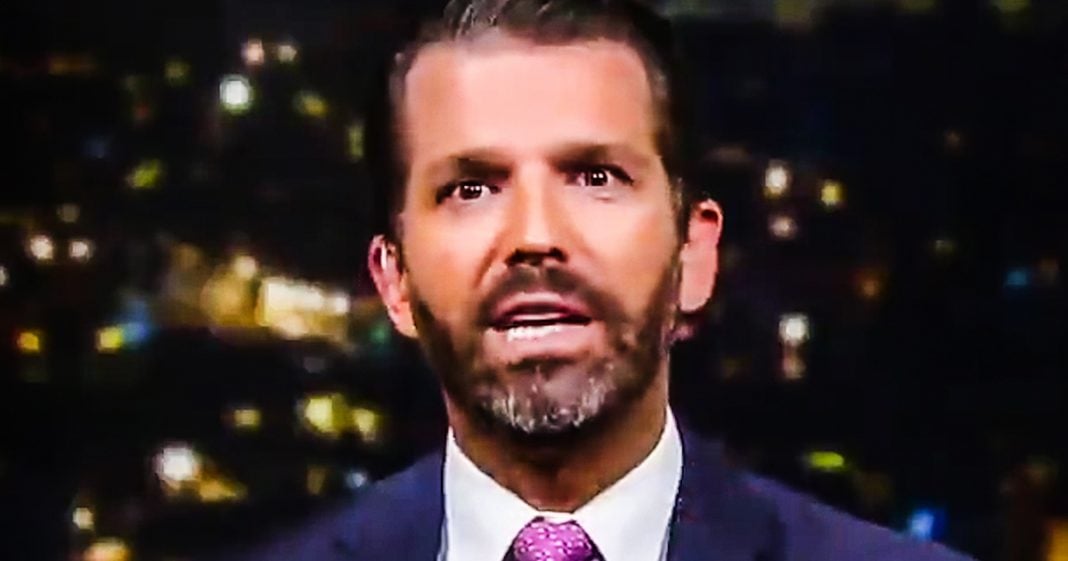 During a recent appearance on Sean Hannity’s Fox News program, Donald Trump, Jr. claimed that he wishes his last name was Biden so that he could make millions overseas. The man lacks self-awareness, as he’s literally making millions overseas already solely because of his last name. Ring of Fire’s Farron Cousins explains why Junior made these comments and what he’s trying to accomplish with them.

*This transcript was generated by a third-party transcription software company, so please excuse any typos.
Donald Trump jr might be the least self-aware human being on the entire planet, quite possibly in the history of all of humanity. Last night on Sean Hannity’s propaganda program on Fox news, Donald Trump jr went on there and whined about the fact that he’s not Hunter Biden and therefore can’t use his father’s name to make money. Uh, here’s a clip.
[Imagine look at how the media protects Joe Biden? Joe Biden’s on tape and a quid pro quo. Either you fire him in six hours or you’re not getting the billion dollars that fire him. You get the billion. All quid pro quo. Then you got, do you know anything about Ukraine? No. Anything about energy? Nope. Oil? Nope. Gas. Nope. Millions of dollars. Oh, that was the guy that Joe demanded to be fired. Imagine if that was your name was Hunter Biden except Hunter. I wish my name was Hunter Biden. I could go abroad, make millions off of my father’s presidency. I’d be a really rich guy. It would be incredible.].
Yeah. I mean poor Donald Trump jr not being able to cash in on his father’s name and his father’s name. By the way, if in case somebody forgot is Donald Trump, but Donald Trump jr has earned everything that he has gotten in his own life, it is not the result of literally having his father’s name, not just last name, the whole fricking name. Here’s the thing, Donny jr knows he’s lying. He knows he is gaslighting America to make us think we’re the ones going insane. But really it’s him and his family and his father and his father’s administration. But he does that because it’s projection. You know there has been, even though this aired late yesterday evening, there’s been lots of great analysis about this. And people have pointed out the fact that he is projecting all of his own corruption onto Hunter Biden because folks, let’s not forget Hunter Biden has never once been accused of doing anything illegal. The investigation into the firm he went to work for happened long before Hunter Biden went over there. And in fact it was because the prosecutor was not aggressively going after that company. And plenty of others that everybody wanted. The prosecutor gone, including Joe Biden. So no. As, as Sean Hannity points out, that’s not necessarily a quid pro quo. That was what the global community, including folks at the UN wanted to happen. It had nothing to do with Hunter Biden, but they want you to think it did. But more importantly, let’s get back to what Donnie jr said there. Oh, if only my name was Hunter Biden, I’d be using that name, my daddy’s name, to go overseas and make millions. You do realize that you are now running the Trump organization with your idiot brother Eric, that has plenty of properties overseas that your pulling in the profits from. And the only reason anybody’s going there is because in the outside of the building it says, Trump, your name is literally pulling in millions of dollars overseas that you now get you idiot. But again, he’s gaslighting us. He wants us to talk about this. He wants us to point out how crazy and stupid he is because it distracts from the fact that his father is very clearly a criminal.