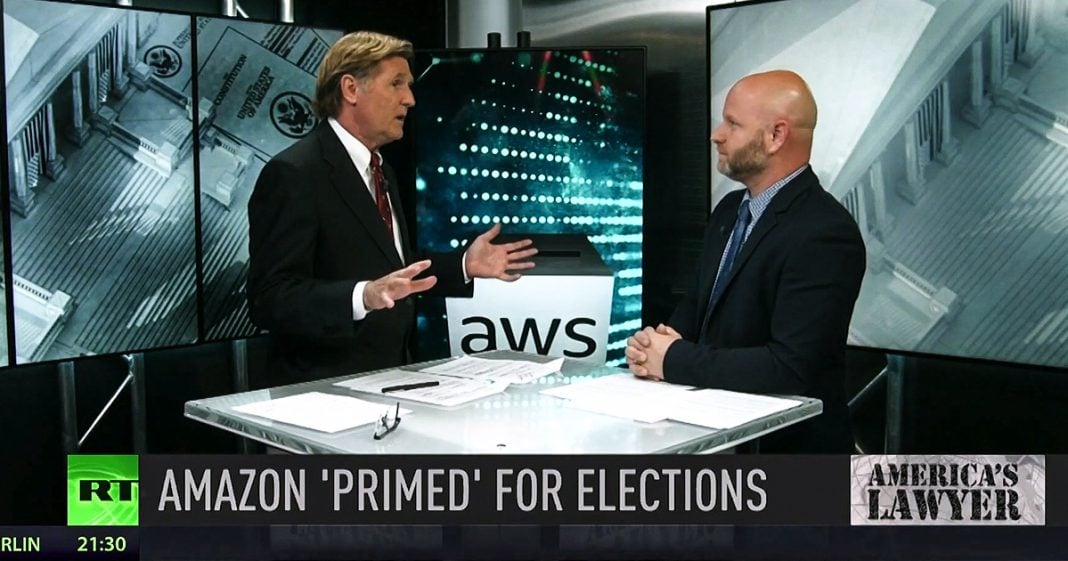 Mike Papantonio:             If the thought of Jeff Bezos running our election system in America scares the bejesus out of you, you’re not alone. According to new reports, Amazon has now taken over most of our voting systems. I have Farron Cousins from the trial lawyer magazine with me now to explain what’s happening. Farron, you’ve been on this Amazon case for years, warning us about how dangerous this is, when we have an entity where there are no antitrust laws that seem to be able to close them down. There’s no regulations that close them down or keep them from expanding into all parts of our lives. And now this is pretty scary stuff. Now, now they’re messing with our right to vote. Tell me, lay this story, lay this story out for me a little bit.

Farron Cousins:                  Well, what’s happening right now is apparently over the last couple of years, and this has been done relatively quietly, Amazon, Amazon web services, AWS they call it, they have absolutely taken over 40 different State’s voting security. Which means not only do they, how’s the results on election night, they, how’s the voting roles, the voter registration information, everything in any given one of those 40 States that has to do with the voters. Everything from the results to the registrations and anything in between. So Amazon itself, Jeff Bezos, CEO, is sitting there on our, all of our information, including the results of federal, national, state, and local elections.

Mike Papantonio:             Okay. Let, let me remind you about a story that we did. It was on Capital One where the system was hacked and I don’t, I don’t remember exactly the numbers is some like 100 million people were affected by that hack. This was part of the Amazon program too.

Mike Papantonio:             Okay. So somebody, and this was a rogue employee. Now, so here you have, everything’s in the cloud and right now, I think my, I think the numbers like they can, they control almost 35% of all the cloud computing business right now. So now they’re moving into elections. We know that they’ve failed miserably, not just one time, but a couple of times, failed miserably, and now we’re saying we want you to keep up with all this information about voting.

Farron Cousins:                  And what’s really suspicious about this to me is the fact that a lot of States already had outsourced this cloud computing for the election services and they were paying thousands of dollars for the service. And Amazon came in and in some of these States, South Carolina specifically, they said, we’ll charge you less than a hundred dollars a year.

Mike Papantonio:             Okay. You control information, you control dollars. Obviously they lost huge money by saying to these entities, we’re only gonna charge $100. What are they really after? They’re after partial social security numbers. They’re after birth certificate, I mean, excuse me, date of births. They’re after all of this information that we don’t want out there and so all of a sudden they control all of that. They even have the signature. They have the, they, they have the duplicate of the signature, the handwritten signature that they have in the cloud and they can call on anytime. And who do they sell it to? They sell it to people who are marketing to us. That’s where the money comes in.

Mike Papantonio:             The other part of the story, I think you hit it right on the head. When you control that kind of information, you’re powerful. You can threat, you can, you can pose a threat to your, to, to your enemies. And so I, I think this is where it’s going. As a matter of fact, you know, we see Google doing the same thing, don’t we?

Mike Papantonio:             I mean, it’s the same thing. Gain information, control that information and you’re, you’re not only a political threat, but you’re in the business of making big money.

Farron Cousins:                  Well, and when you think about the fact that like the Capital One hack you mentioned, that was from somebody at AWS.

Farron Cousins:                  So suppose you get an AWS employee that’s far left or far right, whatever it is, they want to screw with election results. They can do that now. And that’s what happens when you have this privatized entity.