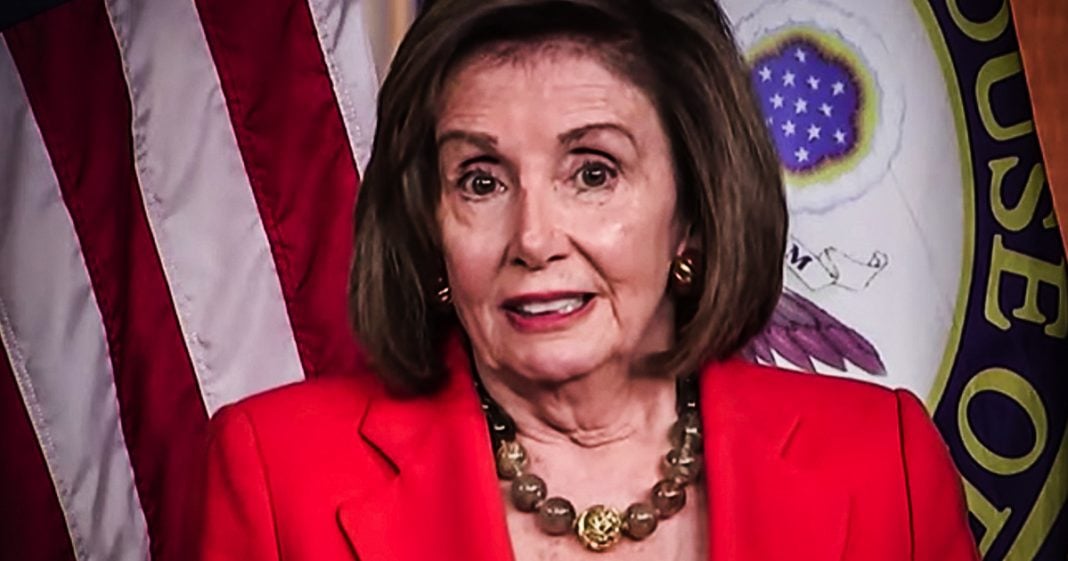 Republicans know that they can’t attack the impeachment inquiry on the merits, so instead they have resorted to attacking the procedure. 40 Republican groups have now signed onto an ethics complaint against House Speaker Nancy Pelosi, claiming that she is breaking the rules with the inquiry and that the whole thing is a partisan witch hunt. This complaint will go nowhere, but it’s the only thing Republicans know how to do, as Ring of Fire’s Farron Cousins explains.

*This transcript was generated by a third-party transcription software company, so please excuse any typos.
40 different conservative groups have signed on to an ethics complaint that they have sent to the office of congressional ethics saying that Nancy Pelosi is breaking the rules and has weaponized the impeachment process against Donald Trump, and they want the office of congressional ethics to do something about it. What that is, they don’t quite know, but 40 different groups led by the tea party patriots thinks that Nancy Pelosi needs to be disciplined in some form or fashion. Now keep in mind, this is different from Matt Gates’s one man crusade that he launched yesterday after his moron brigade failed the week before. He has filed a complaint against Adam Schiff and he wants something to happen to Schiff again. He doesn’t quite know what, but somebody should do something Adam Schiff and it’s not going to happen. Neither is this letter to the office of congressional ethics. Gonna do anything to Nancy Pelosi because as much as conservatives would like to think that Democrats are doing something wrong here, the truth is they’re not. And that’s a hard pill to swallow for conservatives. And just as a point of interest for these 40 groups to say that Pelosi has weaponized impeachment politicized impeachment, you do realize that conservatives in Congress tried it on 12 different occasions to impeach Barack Obama for non scandals. I don’t know if people remember that or realize that that’s how many times it was, but that’s how many times you had Republicans in the house saying, we are going to impeach him for this. We’re going to impeach him for being Ghazi. We’re going to impeach him for fast and furious. We’re going to impeach him for the allowing transgendered people to go to the same bathroom that they identify as. That was the most recent and last time they said we’re going to impeach him for this. That’s nuts. Are you actually, and I’m sure a lot of people will see the viral video, the, the redneck out there saying that Obama should have been impeached for banning flavored, uh, dip tobacco dip wanted Obama impeached for that. But yes, it’s Pelosi who’s weaponized and politicized impeachment. Right? But here’s what’s happening in Republican world, they can’t fight the charges. The evidence is mounting in a way that makes Donald Trump look really, really bad and corrupt. And so they attack the process instead. And that’s why today obviously they, they formalized it, they brought it to the vote, did all that, uh, which is great. So now Republicans have to find something new to complain about. However, even before that happened in the complaint, these groups signed on to, they already said even with the vote is too is still not enough. I mean the damage is done. You can’t put the genie back in the bottle, which I don’t know if anybody’s ever seen anything about genie’s, but no, you quite literally can put the genie in the bottle. It’s why you have to rub it to get them out and then when your done, they’d back in. Yes, the genie always goes back in the bottle. God, these folks are stupid. But that’s all they have left. Stupid talking points led by stupid people to an end that they haven’t quite figured out yet. But they just know if they get out there and keep doing stupid things, maybe they can distract the public just long enough for them to forget what’s really happening behind those closed doors.