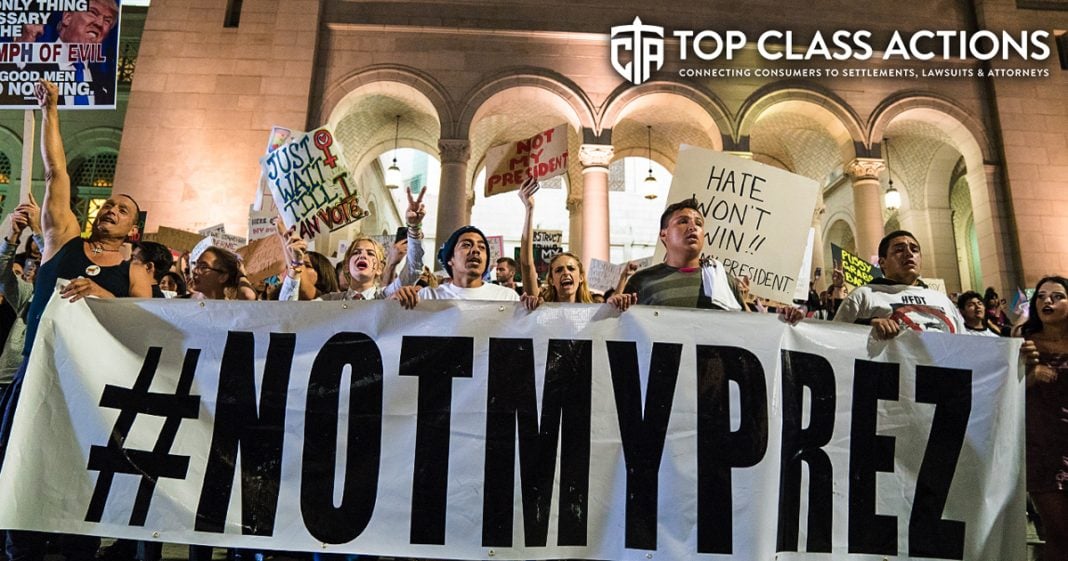 Arizona protesters at an anti-Trump rally who filed a class action lawsuit over the violence they allegedly suffered at the hands of the Phoenix Police Department have received Class certification. The protesters say they experienced excessive police violence at a Trump rally that took place on Aug. 22, 2017. The decision to grant certification to the Trump protesters, despite the Phoenix Police Department’s arguments that the proposed Classes of protesters should not be certified, was made by U.S. District Judge John Tuchi. Ring of Fire’s Farron Cousins discusses this with Scott Hardy, President of Top Class Actions.

Farron Cousins:                  It’s no secret that the presidency of Donald Trump has sparked a lot of protest in this country. Half the country really can’t stand the guy. Half the country really likes him. And so anytime Donald Trump shows up somewhere for a rally, you’ve got the two separate groups. You’ve got the Trump supporters and the people there protesting Donald Trump. But according to a recently certified class action lawsuit, some of these anti-Trump protesters have actually been roughed up by the police and that’s what sparked this litigation.

Joining me now to talk about this is Scott Hardy with Top Class Actions and Scott, I gotta be honest. I have, obviously as everybody here at Ring of Fire knows, I follow what happens with this administration very closely. I followed these rallies and everything that’s going on with them. I hadn’t seen this. This was an incident that I did know about, took place in Arizona in 2017, tell us what happened.

Scott Hardy:                          Well, this actually provided some great video for one unfortunate protester who was not in the free speech area and was not protesting the right way because he, this, this, this guy would not most likely be included as class action. But it was, this video was played widely here in Phoenix and Arizona where he picked up something, threw it at the cops, I think it was a tear gas canister that was shot at him and a cop took a rubber bullet gun, bam, and nailed him right in the bean bag. Oh my gosh. The perfect shot, by a rubber bullet against this guy. That video was very special and provided a lot of, a lot of comments among those of us here in Phoenix. But this class action involves the protesters who were not throwing things at police, who were not breaking the law and who were in the free speech area.

Those protesters still got tear gassed, still got some rubber bullets fired at them, still were sprayed with pepper spray. And so they’re saying, hey, we are in the free speech zone. We are not rioting. We’re not causing a problem, but Phoenix police still came in there according to this class action and sprayed them down. So it’s, it’s really interesting that this did get certified because the judge said, hey, you know what, it wasn’t like the, it’s the rioters or the people that were throwing stuff at the cops that are filing this class action. This is being filed by the people who are just sitting there in that free speech zone, holding signs. Yet the police came over and according to this class action, sprayed them down with pepper spray, hit them with some rubber bullets and tear gas and caused problems and, and distress to these peaceful protesters.

Farron Cousins:                  Well, and you know, and I think that’s the thing people have to understand too, they may not know exactly how these counter protests work, but typically whenever, you know, a political candidate shows up somewhere to do a big rally, whether it’s a Democrat or Republican, you’re always gonna have people that aren’t happy about it. So in order to, you know, abide by first amendment laws and keep the peace, they’ll set up these little areas typically off to the side. But within view of the venue so they can be heard. But that’s where the protestors are supposed to gather. And over here and the so-called free speech zone, you say whatever you want, you can hold your signs, but you can’t be violent.

You know, that, that’s never okay in or outside of the free speech zone. You can’t throw stuff. You can’t try to get into altercations like we’ve seen happen in Portland where they’re going out there and actively agitating each other, trying to get the other side to basically like a football game, jump off sides so we can attack you. This was different. These people were sitting there saying, look, we don’t like the guy. We don’t like his policies.

Suddenly I’m getting hit with rubber bullets on one side and tear gassed on the other. What did I do? I didn’t do anything wrong. This is excessive force. I don’t deserve this. So, I, I think this is great that the judge said, listen, the folks who went out there, the ones who got violent, you’re not part of this. The ones who were just sitting there peacefully and you got attacked by these police officers, you’re moving forward in this case.

Scott Hardy:                          Exactly. There was a lot of video of those peaceful protesters just sitting there holding these signs and getting sprayed and so this, this, this happened. Obviously there were cameras everywhere and that’s why this class action I believe got certified because there was so much news coverage and there was a lot of video, not just of that guy who was breaking the law and, and, and being a jerk and some people said got karma for getting that rubber bullet right in the package. But for all of those other people that were sitting there legally protesting and just got sprayed in the face for staying in their free speech zone, you know, it makes sense. I think we’ll see this one now that it’s been certified, we’ll probably see it settle within the next six to eight months.

Farron Cousins:                  Well, hopefully that is the case. That would be ideal. But for anybody who may have been there or been in a similar situation at any kind of protest throughout this country, please follow the link in the description of this video. Find out all the information, see if it may be applies to your situation, even if it wasn’t at this event in Arizona, the folks at Top Class Action, I’m sure would love to hear about that so we can help get you some relief. And again, while you’re over there, make sure you subscribe to the weekly Top Class Action newsletter. Stay up to date on stories like this and so many more. Scott Hardy, Top Class Actions. Thank you very much for talking with us today.