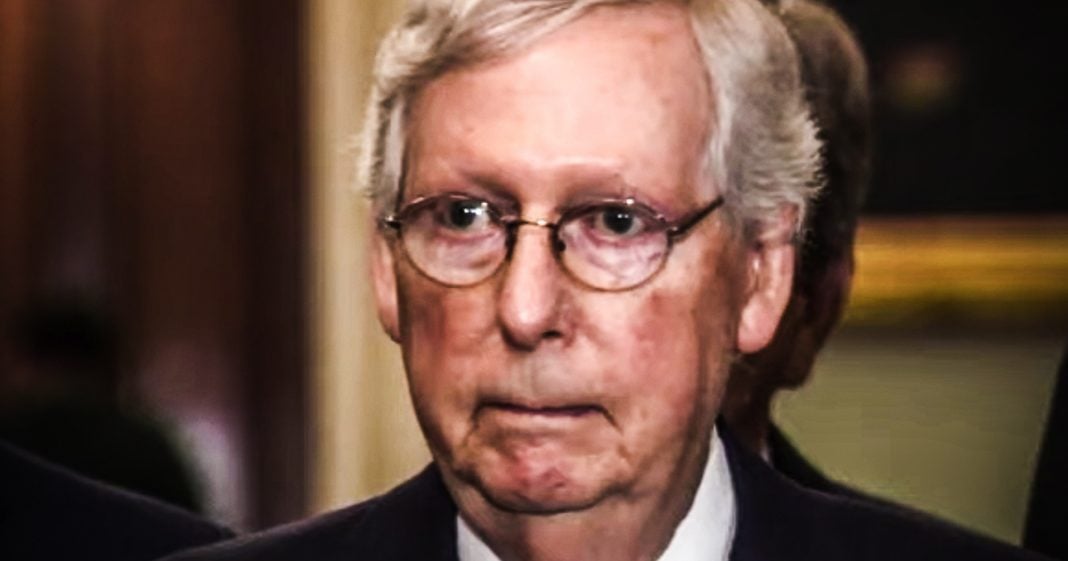 According to new reports, Republicans are now worried that they won’t just lose the presidency in 2020, but they are now fully aware of the fact that they could likely lose control of the Senate, too. With the House seeming to remain firmly in the hands of the Democrats for the foreseeable future, the Senate was all Republicans had left, and now they don’t think they’ll hold it. Ring of Fire’s Farron Cousins explains what this means.

*This transcript was generated by a third-party transcription software company, so please excuse any typos.
Republicans right now are freaking out. Well, Republicans, for a long time had been freaking out. They’ve been freaking out about the impeachment. They’ve been freaking out about polls, they’ve been freaking out about fundraising. It’s kind of what they do now. Republicans are just in a general state of constant freak out. But according to Axios, this newest freak out is actually a big one and it’s very important because Republicans, according to this Axios report, are now talking behind the scenes about how terrified they are of a complete and total wipe out in 2020 here’s what’s happening. Republicans pretty much already expected they weren’t going to take back the house of representatives, especially when you factor in all of the Republicans who have decided to suddenly retire, even though they all had bright futures ahead of them. And now those districts are up for grabs and those districts are not as solidly red as Republicans would like them to be. A lot of them are solidly purple, meaning they could go either way. So Republicans know they’re not getting the house back. As for the white house. They had hoped they had a chance, but they also see the polls showing that Donald Trump losing to literally every top tier democratic candidate all the way down to Pete Budigedge, and possibly even lower than that. Trump can’t beat any of them. So they said, okay, maybe we lose the white house, but Hey, we got the Senate right. Well, that’s where the newest freak out comes in because according to the latest round of polling and the fundraising numbers coming in from individual Republicans seeking to retain their Senate seat, you don’t have that either. Now, keep in mind, Republicans only have to lose three seats to the Democrats for the Democrats to retake the majority in the Senate. That is very doable and very realistic, but that is also predicated upon Republicans not taking any democratic seats. Otherwise. That number three goes to four or five and that’s also still realistic. But Democrats also need to understand you’re going to lose Doug Jones seat in Alabama. He only got elected because he was running against Roy Moore, who would rather, you know, troll the malls for teenage girls than be a politician. So that’s why Doug Jones is there. Doug Jones is about to go buy a, but he’s a very moderate mealy mouth, Democrat, whatever. May as well have a Republican there, right? Um, Joe mansion could lose him again, goodbye forever if that happens. Don’t care about you one bit. I’d rather take back a seat from a horrible Republican than have Joe by Joe Manchin and Joe Biden, uh, in that Senate. So, okay, so maybe you’re looking at five seats. You got to pick up from the Republicans. Well, again, according to polling in States where Republicans are running in very tight races, the Democrats are not only polling better than them, they’re also raising more money than their Republican opponents. So that is why Republicans right now are fearing a total wipe out in 2020 because they could lose the house, they could lose the Senate, they can lose the white house, and that’s a big deal for them. The one thing they won’t lose, as I discussed yesterday, the judiciary, they got that for a couple of generations, so they’re okay there, but for the rest of it, the electoral side of it, it’s not looking good for Republicans, and yet we’re still a year away from these elections. But if the way things are going right now is how they continue to go, they can kiss not just the white house, goodbye, but the Senate as well. And that would be awesome for president Bernie Sanders or president Elizabeth Warren, to have that complete control so that they get two full years at least to pursue their agenda and make it a reality.