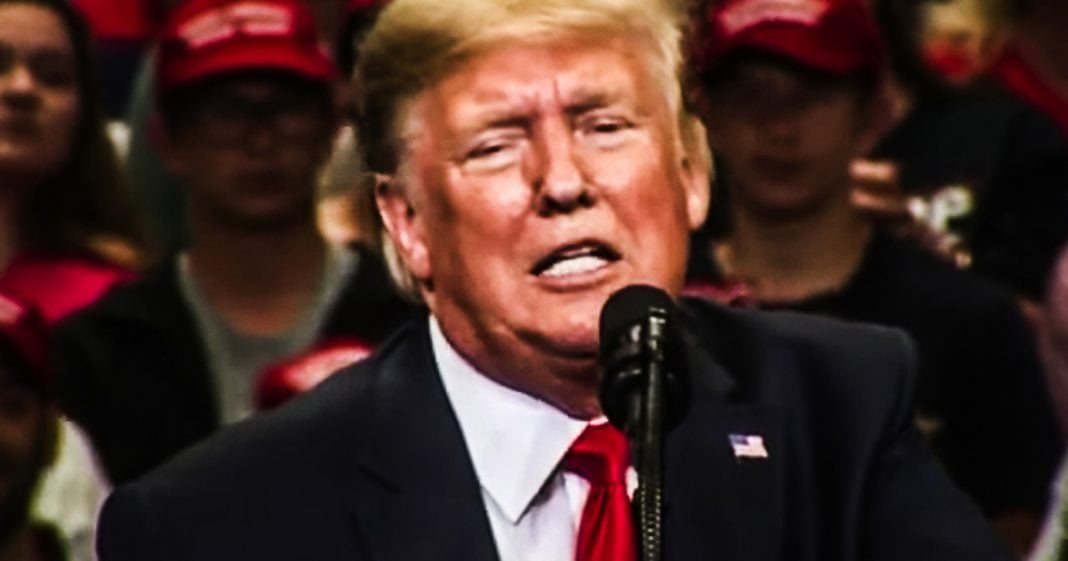 During a webinar last month, leaders of the payday lending industry discussed raising money for Donald Trump’s campaign to avoid a Democrat taking office after the 2020 election and putting new regulations on their industry. This is one of the most corrupt financial industries in this country, and that’s not an easy title to obtain. Ring of Fire’s Farron Cousins explains what was discussed in this secret meeting and why it shows how important it is to remove Trump from office.

*This transcript was generated by a third-party transcription software company, so please excuse any typos.
On September 24th there was a meeting, well actually a webinar of a some high profile Republican donors and members of the payday lending industry, and it was led by a man named Michael Hodges. Now, Mr. Hodges build himself according to the Washington post as a, you know, high profile Donald Trump campaign donor. And what Mr. Hodges said on this little webinar that he was leading was to tell the payday lending industry that, Hey, if you want a favor from Donald Trump or from anybody in the Republican party, really all you gotta do is just give him a little bit of money. This is not speculation. By the way, this is not really paraphrasing what Mr. Hodges had to say. This is because the video of the webinar was actually posted on YouTube this past Friday before it got taken down. After about an hour when the Washington post got a hold of it and started calling some of the people that they were able to identify from the webinar. And that’s what drew their attention to the fact that, Oh God, somebody posted this online. Now here’s a couple excerpts from Mr. Hodges. About how this little influence scheme that he’s running works. For example, I’ve gone to Rhonda McDaniel and said, Rhonda, I need help on something. She’s been able to call over to the white house and say, Hey, we have one of our large givers. They need an audience. They need to be heard and you need to listen to them. So that’s why it’s important. That is a direct quote from the video of Michael Hodges explaining how things work with the Republican party. You give them some money and then you call them up, call up the the chairwoman of the Republican party. That’s who Rhonda McDaniel is. For anybody who hasn’t been paying attention for a few years and you say, Rhonda, Hey, I need something. You better go to the white house because at this point, as Hodges points out, a Rhonda has become his employee because he, he pays money, so she’s got to do what he says. And Rhonda is more than happy to go and do it. So she goes to the white house where she calls the white house and says, Hey, this guy, he’s a big giver. He needs a favor, you better do it and they do it. That is influence peddling folks. That’s quid pro quo. I mean hell, this is likely bribery at this point because Mr. Hodges is sitting there on that webinar telling all these other payday lenders, Hey, this is how you do it and you guys have been doing it. We know you have. Just keep doing it because God forbid we end up with a Democrat in the white house in 2020 and then what happens to you payday lenders, you’re going to be going back to those same regulations you were under at the end of the Obama administration. One of the, one of the best things Obama did in office was put these regulations in place by way of the CFPB and it cut back on what these payday lenders were able to do to scam American citizens. Donald Trump came in, put Mick Mulvaney at the head of the CFPB Mulvaney who had during his, uh, house of representatives career, taking lots of money from payday lenders, started rolling back all those regulations that have been putting place, telling the payday lenders, Hey, it’s okay. Go back out there to the poor communities, charge them 900% interest rates, lock them in an endless cycle of debt. We don’t care where Republicans screw them all over. If you have to, we’ll be right here to give you whatever you need. That’s what Mr. Hodges was talking about in this webinar, and that’s what Donald Trump and Mick Mulvaney and every other Republican has delivered to them. But now they’re scared. They’re scared about what’s going to happen in 2020. Because if you end up with a president, Bernie Sanders or president Elizabeth Warren, the payday lending industry is about to go extinct as they rightfully should. These are predators. These are the worst of the worst of the banking industry. And that’s saying a lot, you know, to be able to look at the people at the chase and bank of America in all of these other wall street banks, HSBC, to be able to look at them and say, Hey, at least you’re not as scummy as these guys in the payday lending industry. That’s pretty bad. But that is exactly what these folks are. Now you can go check out the audio for yourself, send the link in the description of this video. And I encourage everyone to do it because they’re explaining exactly how the Republican party and in many ways the democratic party to how they work. You give them money, then they’re going to do whatever you ask them to do. This is the problem with politics in the United States today. This is why we have to put stricter limits on campaign donations. This is why we have to turn, uh, overturn citizens United and McCutcheon. This can’t continue. And Mr. Hodges, like the pompous, arrogant Republican that he is spelled it out so clearly for us that when it comes time to vote on a constitutional amendment to overturn citizens United and McCutcheon and get rid of, uh, all these billion dollar donations, this audio of Mr. Hodges here, this ought to be exhibit a and it should be run in television ads and radio ads in every single city across this country.