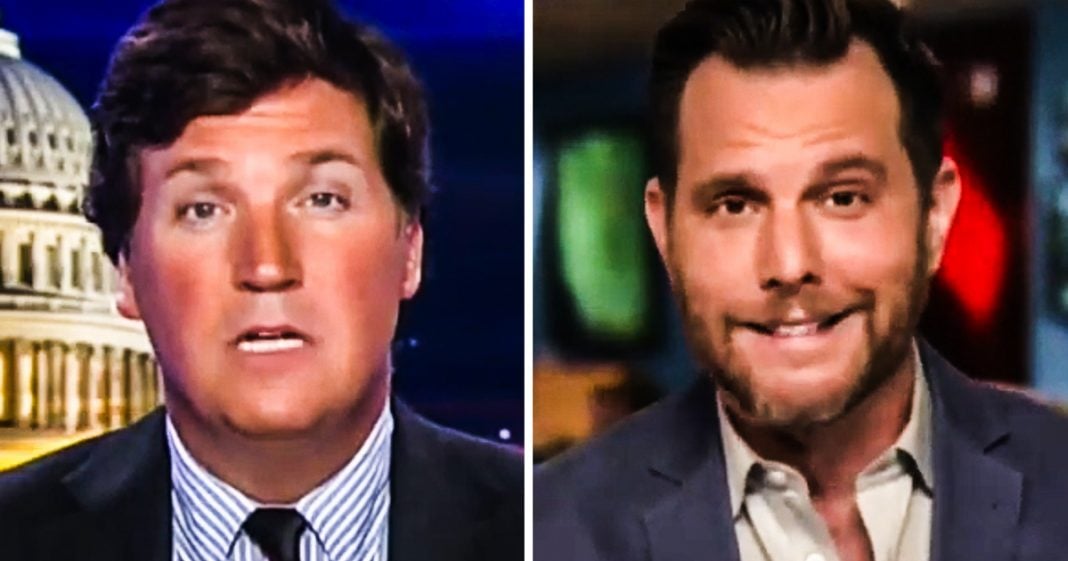 There are currently 7 active wildfires in the state of California covering close to 100,000 acres, and big-brained conservative shock talker Dave Rubin thinks he knows EXACTLY who is to blame – politically correct liberals. During an appearance on Tucker Carlson’s Fox News program, Rubin claimed that the PC police who forced diversity onto California’s fire departments have made the situation so much worse. Ring of Fire’s Farron Cousins explains how stupid this argument is.

*This transcript was generated by a third-party transcription software company, so please excuse any typos.
Right now, there are seven active wildfires in the state of California covering an area of nearly 100,000 acres. So yesterday evening, Fox news host Tucker Carlson decided to have on conservative talker, Dave Ruben to help explain what exactly is happening and why these fires started in the first place. So take it away. Tucker and Dave,
[Most beautiful part of the United States. The problem right now is that everything, everything from academia to public utilities to politics, everything that goes woke that that buys into this ridiculous progressive ideology that cares about what contractors are LGBT or how many black firemen we have or white this or Asian that everything that goes that road eventually breaks down. It is not how freedom is supposed to operate. What is supposed to happen. Tucker. Imagine if your house was on fire, would you care what the public utility or what the fire company, what contractor they brought in, what gender or sexuality or any of those things he or she was, I mean, it’s just absolutely ridiculous. And right now,]
yes, folks that that’s correct. It’s not because of catastrophic climate change. It’s not because we’ve cut budgets for forest management and can’t clear out the undergrowth that spreads these fires. It’s not because of the negligence of power companies like PG & E. Nope. It’s the PC liberals out there in California who’s hatred of non-PC I guess ignited the spark that lit up the state because firefighters didn’t have black people because firefighters weren’t hiring anybody from the LGBTQ community and somehow now there’s lots of fires there. Ruben didn’t exactly complete the link there. I mean he didn’t say specifically how that was related to the fires, but trust him folks, he is the intellectual dark web, right? He’s one of the brightest minds, the biggest brains on the right. So surely he wouldn’t just be saying stupid things because that’s all he knows how to do, except that’s exactly what he did because that is all he knows how to do. There is there substance in that debate, there is no substance in that argument. Just like there isn’t in anything Dave Rubin or anyone on the right has to say, and that’s why this kind of gets frustrating a little bit, right. Nobody talks about PC culture more than angry conservatives. They’re more obsessed with people being PC or not being PC than anybody on the left is what’s happening right now in California is a tragedy and this is not because anybody told the fire department, you have to go and hire more black people. I don’t even understand how somebody can be stupid enough to think that that’s what that is. Let alone stupid enough to write an article a year or so ago calling Dave Reuben, part of the intellectual dark web. There is nothing intellectual about Dave Rubin or Ben Shapiro or Charlie Kirk or Candace Owens or Tomi Lahren or any of these people, Jordan Peterson, none of them folks. There is no intelligence there to speak of. There are crazy right wing talking points that they cannot deviate from. They just say the same stupid thing over and over regardless of the question they’re asked. Ruben is supposed to be talking about fires and instead he’s talking about affirmative action causing fires somehow. Again, he never exactly made the link because I don’t even think Ruben thought that he was making any sense at that point, but Tucker Carlson, as you saw in the clip at one point, butted in and said, Oh yeah, I agree. Oh, that’s totally right. Yeah. No, you’re all idiots. Every single one of you, along with anybody who thinks that any of these people are part of any kind of intellectual web dark or not.