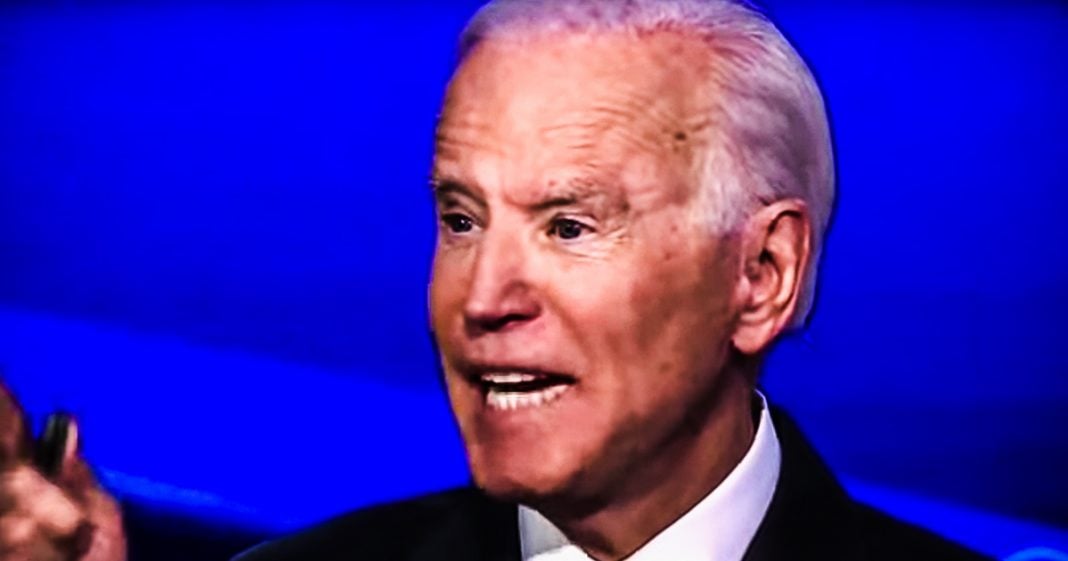 Joe Biden’s poll numbers in the early primary and caucus states are getting worse, and his campaign has admitted that they don’t expect to win these races. Maybe they need to go back through the past few decades and see how bad that will be for the campaign, as no candidate has managed to lose more than one early race and still become the nominee. Biden’s campaign is tanking, and that’s exactly what needs to happen, as Ring of Fire’s Farron Cousins explains.

*This transcript was generated by a third-party transcription software company, so please excuse any typos.
Joe Biden’s campaign is in a lot of trouble. Not only did he get outraised by his opponents in the most recent quarter, but he’s also struggling greatly in early primary and caucus States. And a lot of people may think, well okay the money thing, that’s probably a big deal. But the struggling in these early States, what does it matter? Does it matter what a couple of folks over in Iowa have to say? And then New Hampshire and then Nevada and then South Carolina, why does that matter? He can pick up the delegates on super Tuesday, which is pretty much exactly what Joe Biden’s campaign has said they’re planning on doing. They said they understand and we talked about this a couple weeks ago, when they say they understand that they’re going to lose a lot of these early primaries and caucuses, but they want to stick with it till super Tuesday cause then they’re going to make up all the ground they lost with the early ones. And that I have to say no you won’t. And I’m not saying that because I don’t think Joe Biden has a chance at winning. I don’t think Joe Biden has a chance at winning, but uh, I also do research. See has actually the biggest part of my job here at ring of fire. It’s not sitting here and yelling about the news of the day. It’s actually doing research, which is what I spent a good portion of the day yesterday doing. Just to make sure that the point I’m about to make is accurate and it is because not since the year 1992 which at this point folks, we’re talking 27 years ago, not since 1992 has any candidate for president gone on to win the nomination. If they lost more than two of the early primaries. And in 1992 bill Clinton only lost two of the early ones. Buddy went on to become the nominee. He lost Iowa and New Hampshire, although he barely lost New Hampshire, but he did go on to become the nominee. Other than that, if you don’t win most of those early contests, super Tuesday means nothing. And part of the reason for that is the bandwagon effect. That is why the entire primary caucus thing is actually kind of stupid and very harmful because what happens in Iowa, even though we only think about Iowa once every four years, no offense to any Iowans watching this, what happens in Iowa does affect what happens in every other race because suddenly you see somebody winning, right? That person now in your mind, when you go to vote in New Hampshire, you know who has won. They are a winner and that will influence the way you vote. That’s human nature. That’s how our brains work. Joe Biden can’t afford a loss because if you get a voter in Nevada, which is going third, by the way, and you want to vote for Joe Biden because you’re not sure who these other folks are, but then you think back, you say, well, damn, Biden just lost Iowa. He lost New Hampshire. Why do I want to vote for the guy here? I he’s got no chance at winning. Clearly I’m voting somebody else, so suddenly he loses a third state. You lose that third one. That’s a death sentence, folks. And that’s exactly what Joe Biden is looking at. He’s not going to survive these first four early primaries and caucuses to be able to make it to super Tuesday, and that’s going to be a very real problem for him. A problem that his campaign staff doesn’t seem to understand. and to be honest, I’m glad they don’t understand it. I don’t want Joe Biden to win because Joe Biden can’t win a general election. Joe Biden’s proven in the past, he can’t win a primary either. And this is gonna be the third time he’s had to prove it to us. We need to move on past Joe Biden. We need the vote for candidates that actually have ideas and plans on how to make this country better. And Joe Biden ain’t it. Joe Biden wants to go back to his glory days of Barack Obama, which were glory days for him. Ho hum. Mediocre for the rest of us, where we didn’t see any real growth among us. The top 1% did. The people who run corporations did The rest of us didn’t. Yeah. He created lots of jobs under his tenure. Awesome. Good for you. Too bad. Those jobs don’t pay crap and we’re still struggling and we, the middle class, the working class never actually rebounded from the recession. So yeah, sorry Joe. We don’t want to go back to another four years of stagnant wages. We don’t want to go back to another four years of mediocre, good on social issues, bad on consumer issues, judicial nominees. We just simply don’t want it. And these early States are going to tell you that. And if you think you can rebound from that, then I suggest you do what I did. And you go back and look at the history because it hasn’t ever happened. And I promise you, you’re not going to be the candidate that breaks that mold.