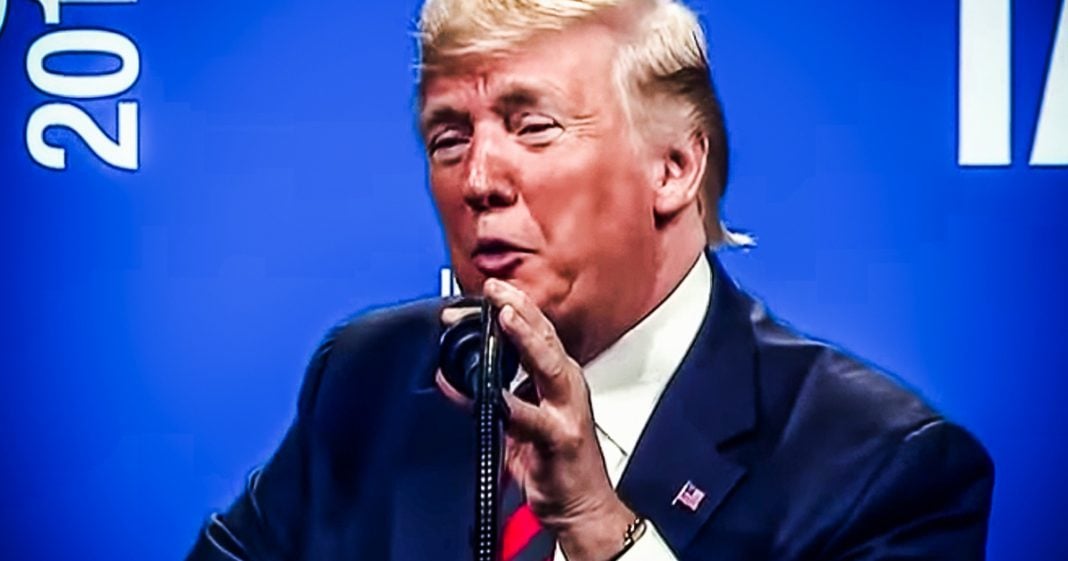 At a speech to police officers in Chicago on Monday, Donald Trump announced plans for “the surge”, which is what he’s calling the new crackdown on crime in America. In addition to ramping up arrests, the President wants to bump up the numbers of officers on our streets while also arming them with military-grade weaponry. This is how we become a police state, as Ring of Fire’s Farron Cousins explains.

*This transcript was generated by a third-party transcription software company, so please excuse any typos.
Yesterday at the international association of chiefs of police conference in Chicago. Donald Trump shows up and he gives a speech where he announces one of the most terrifying things he’s announced since the day he said he was running for president. Here’s what Donald Trump told that gathering of chiefs of police in coming weeks, attorney general Barr will announce a new crack down on violent crime, which I think is so important. Targeting gangs and drug traffickers and high crime cities and dangerous rural areas. Let’s call it the surge. The surge. Much like George W. Bush’s surge in Iraq where he decided to send over thousands upon thousands more us soldiers to kind of wrap things up in Iraq. And here we are, a decade and a half later still there because it didn’t work. But Trump is totally sure that his surge here in the United States on our own streets, totally gonna knock out all crime. He continues. This is the more frightening part to help keep you safe. I’ve made 600 million worth of surplus military equipment available to local law enforcement. So what Donald Trump announced yesterday at this international association of chiefs of police is that he is going to be turning the United States with the help of attorney general William Barr into a giant militarized police state. It’s the surge folks. That’s what he calls it, and here’s what we have to understand. Here’s what Republicans in general have to understand because Trump has repeated these talking points. We see their acolytes out there repeating these talking points, and here it is. They are somehow still living in a 1980s action movie where there’s just crime and murder and drug dealers on every corner of every street here in the United States. The truth is that’s not happening. Are there murders? Yes. Are there drug dealers? Yes. Are there gangs? Yes. Are they as organized and prevalent as they were back then in those eighties action movies? Nope. In fact, they’re far more sophisticated today than they were back then. See, Republicans are living in a dramatize fantasy world where the only way to fight back against these people is to have a John McClain type out there, fly down in a military helicopter, jump out of it with a couple of AK 47’s and mow down 400 gang bangers in a matter of seconds. It makes for great Hollywood action movie. Unfortunately, that’s not how things work in the real world because that’s all fake. But Trump wants to make it real. He wants to give our police departments these weapons of war, and think about that for a second folks, these are weapons of war and he’s given them to police officers to carry them on the street to use them on the street. Does that mean we, the United States are at war and if so, doesn’t that make us the uh, occupied force cause he’s not giving us those weapons. He’s given those weapons to the police to keep us in order. We are being further oppressed by this government today because of it. Police officers, as we have seen very clearly over the last decade, have no problem using their smaller weapons to just end a human life. Even when that human is perfectly complying with everything they tell them to do. So what are they going to do when they get these fancy, new $600 million worth of weapons of war? That’s a terrifying thought. And if Trump is to be believed, it’s about to become a very terrifying reality for millions of American citizens.