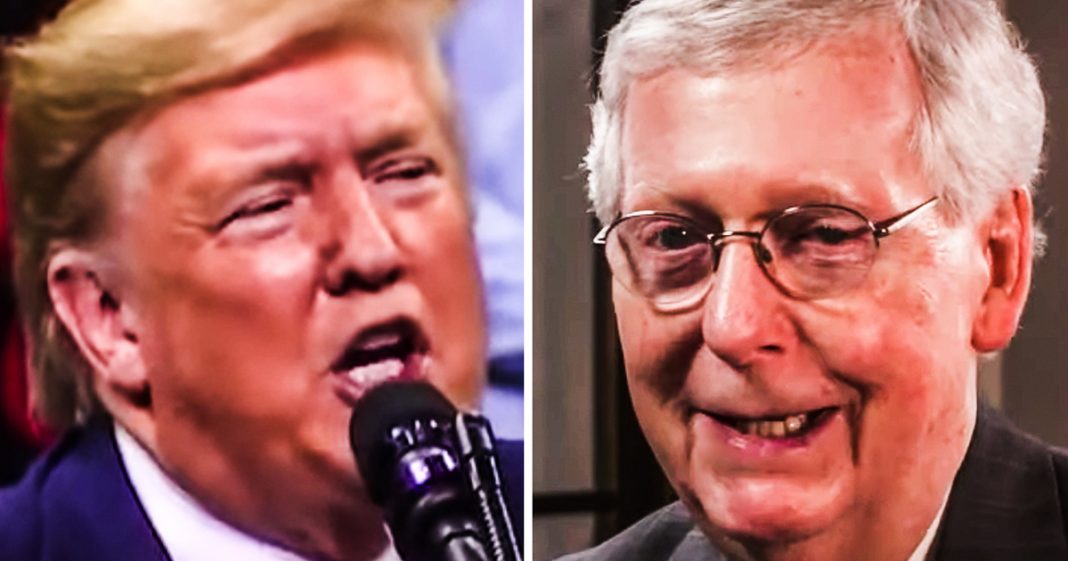 Trump likes to whine a lot about how unfair things have been for him, but he’s gone out of his way to make sure that he and his fellow Republicans remain in power for decades. He did this with the help of Mitch McConnell by packing federal courts with 150 of his appointees. This is power that will last a lifetime, and it will be impossible to undo this damage without a change to the Constitution. Ring of Fire’s Farron Cousins explains what’s happening.

*This transcript was generated by a third-party transcription software company, so please excuse any typos.
With the 2020 presidential election coming up and with more Republican senators being up for reelection, the democratic senators, it is within the realm of possibility for Democrats to uh recapture essentially the executive and legislative branches of the federal government. But one branch of government, thanks to democratic inaction for eight years and Republican obstruction. Uh, one branch of the government is really pretty much off limits to Democrats for a couple of generations. That branch obviously is the Judicial branch of government and Donald Trump this week just celebrated his 150th appeals court appointee, roughly one in four appeals court judges who are serving lifetime appointments in this country. One in four came from Donald Trump himself. That man has appointed 25% of the federal appeals court judges in this country. But of course he didn’t do this alone. Donald Trump doesn’t know who judges are, who to pick, where to find them. So he went to Mitch McConnell, who’s got the Federalist society whispering in his ear, telling him who to pick. McConnell takes those picks, brings them to Donald Trump. Trump rubber stamps it. And then Mitch McConnell goes back to the Senate, changes the rules so that we’re no longer dealing with the blue slip rule, which is if the judge is from your state and either of the senators from your state say, no, not this person. They just don’t even bring it to a vote. They say, okay, this person’s out. He changed that. He’s not paying attention to it. He’s not going with it. That wasn’t a formal rule, but it was tradition from the beginning of the Senate. He also changed the rules to allow less debate time over the nominees that Donald Trump is putting forward and several of the people that the Senate has confirmed mostly along party line votes have been rated as not qualified by judicial rating services. We have several people who are now serving lifetime appointments as federal judges who have never tried or heard a court case in their lives. Now, once I have more legal experience than they do working behind the scenes on a couple of cases and being editor of trial lawyer magazine, I’m more qualified than these people. And I wouldn’t trust myself to be a federal judge for the rest of my life either. But that’s what’s happening in the judiciary. So even if the Democrats take back the house or retain the house, take back the Senate and win back the white house, without the judiciary, he’s lost folks. And not only is that obviously very bad for social issues, cause a lot of these judges have been staunchly anti LGBTQ. This is also a disaster for consumers, right? This isn’t just an issue that, Oh well I’m not LGBTQ, so maybe it’s not gonna affect me. No, this affects every single human being on this whole planet who has to live, breathe, drink water. Yeah. Those things are now threatened because of these pro corporate anti-consumer judges that Republicans have packed the courts with. Now, back to that number I mentioned, 25% of the federal appeals court judges are Trump appointees. You how many cases each year are settled at that federal appeals court level. Fifty thousand, fifty thousand at the federal appeals level, you know how many of those are settled at the Supreme court? A little under a hundred, little under a hundred and yet the democratic party always wants to make the Supreme court be the big deal and it is a big deal. Don’t get me wrong, but you have a hundred cases versus 50,000 cases. I’m going to say the 50,000 is actually a little bit more important. That’s a much bigger number. Those are cases that are also done, settled, not going anywhere. After that, we have to start paying attention to these lower courts folks. That’s where our rights are being taken away. That’s where our safety is being taken away. That’s where our privacy is being taken away and we act like those don’t matter. The Supreme court’s going to save us Democrats by getting an appointment or two, maybe we’ll add more seats to the Supreme court. Now the only way to solve this problem is with a constitutional amendment to put term limits on these judges. That’s what has to happen. That’s not what should happen. That’s not what could happen. That’s what has to happen. No human being in this country deserves a lifetime appointment to any thing. Yeah. For some reason, that’s the way it is and always has been with these federal judges who, again, Trump has put plenty on the bench for the rest of their lives who have been deemed as not qualified. And our future is now in those very unqualified hands.