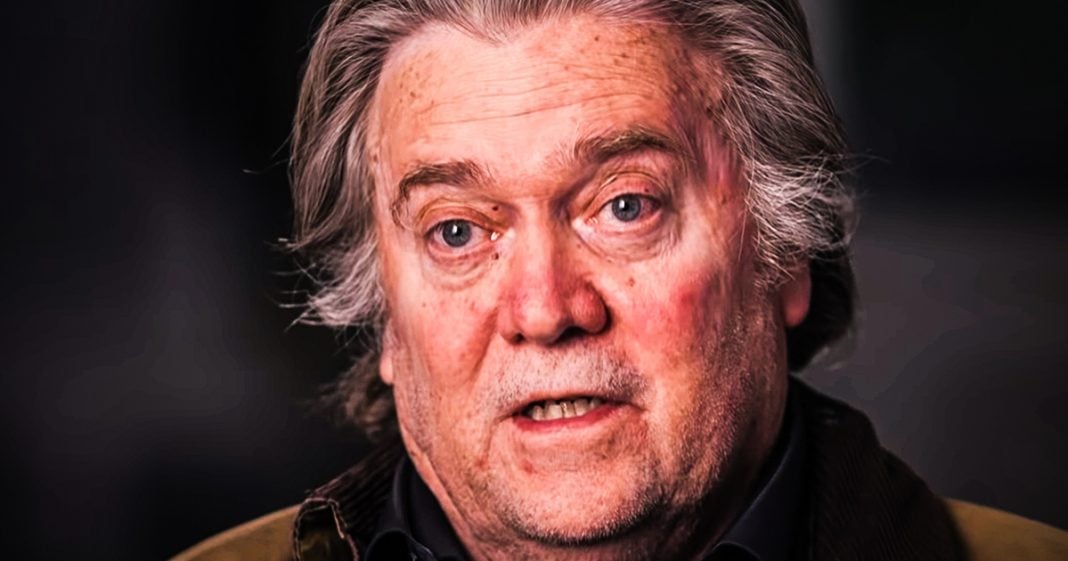 Former Trump strategist Steve Bannon admitted in a radio interview this past weekend that Nancy Pelosi and the Democrats are now “winning,” and that they will almost certainly impeach the President on at least 2 counts. He’s not wrong about either of those things, even if he disagrees with Democrats that Trump committed a crime. Ring of Fire’s Farron Cousins explains how the Democrats finally started winning the fight against Trump.

*This transcript was generated by a third-party transcription software company, so please excuse any typos.
On Sunday, former Donald Trump strategist, Steve Bannon did a radio interview where he admitted something that was actually rather shocking. He said in the interview that the Democrats are actually winning right now and that they are going to be successful in impeaching The president, at least in the house of representatives, Bannon went on to say that there’s two counts they’re going to impeach him on in the house. Those counts are, one – abuse of power, two – obstruction of power, which I assume he means obstruction of justice. You can’t obstruct his own power, but sure, look, I actually agree with Ben and not necessarily that those are gonna be the only two counts. I think there’s going to be multiple counts and we’ll find that out as this story continues to unfold, but he is right about the fact that the Democrats are winning right now and that’s a really odd thing because we’ve been doing this a long time and typically Democrats find a way to screw things up, but so far on this particular issue, the impeachment, they’re doing a pretty good job and yes, the Republicans have thrown everything possible at them. And none of it has made the Democrats flinch up to this point. We’ll see what tomorrow holds because things can change that quickly. But even with Matt Gates in his little moron brigade, even with all of the attacks on Adam shift coming from the president and the Republicans and Fox news and every other right-wing outlet out there, they’re staying strong. They are steadfast in their mission to get to the bottom of what happened. Now, Ben later went on in the interview to say the whole thing is a political witch hunt. You know it’s political theater, political warfare, so he doesn’t agree with any of the impeachment, but he does agree that it’s going to be successful. But here’s the thing, and this goes back to the whole Democrats are winning thing and that is the public is on their side right now. I may remember from months and months where we would just sit in there waiting for Nancy Pelosi to make a move on this, but she didn’t want to because the public was against it. Then she said, okay, let’s do it. And then four days later, the polls flipped. And suddenly at that point, a majority of people wanted to see the president impeached. That’s what it took. It wasn’t because more evidence came out in those four days, it was because they finally saw Democrats taking action, realize that they’re taking action must mean something’s there, and that’s all it took for them. And now, of course, that we do have these testimonies coming out. We’re seeing the white house panic about the people who are testifying, trying to smear them. And the public says, yeah, doesn’t seem right. That doesn’t sound like something an innocent person is going to do. I don’t believe you. It took two and a half years for a majority of people in this country to say, you know what? This dude’s lying and he needs to be removed from office. And that may have been two and a half years too late, but sometimes later is better than never.