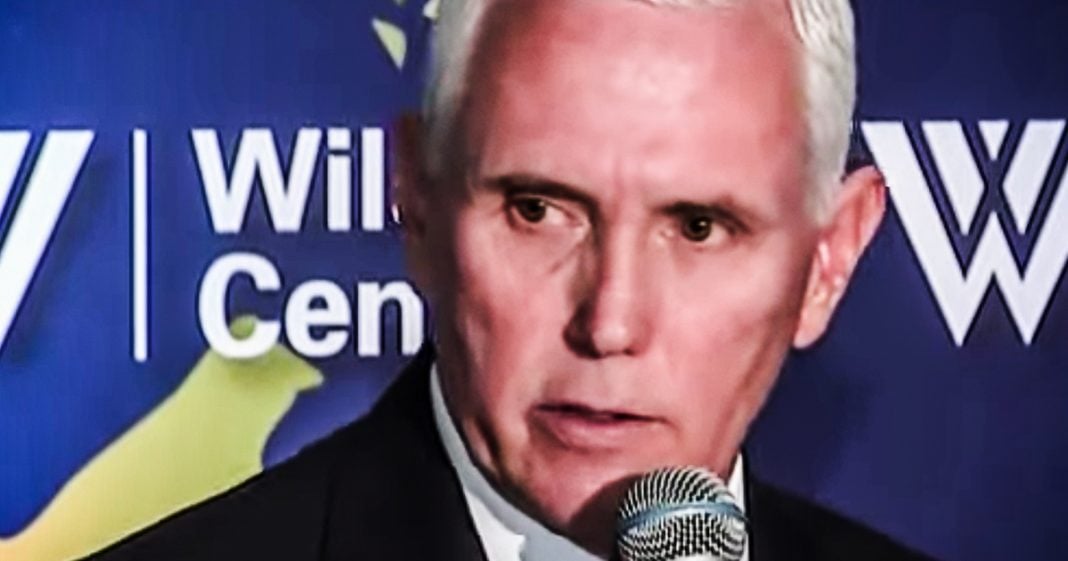 Allies of Vice President Mike Pence are growing increasingly worried that he’ll get swept up in the impeachment probe. They claim that the man isn’t “squeaky clean,” and that Democrats could easily find something to take down Pence in addition to Trump. Does this mean that Nancy Pelosi would become President after a dual impeachment? Probably not, as Ring of Fire’s Farron Cousins explains.

*This transcript was generated by a third-party transcription software company, so please excuse any typos.
So, according to pretty much everybody on NBC news, uh, Mike Pence in his allies are very worried that Pence himself is going to be swept up into the impeachment inquiry also, when they’re not sure that he’s gonna come out of it. Quote, so squeaky clean. Now, here’s the thing about this story. When I saw it, I thought, Oh, that’s great. Maybe we got some inside information. People have talked to Pence’s allies. Maybe they’ve talked to Pence and they know that he’s freaking out. But here’s the headline, and this is from Ross story, my favorite news site out there. They said, Pence allies worried he’ll be swept up in Trump impeachment inquiry quote. He’s not going to come out of this squeaky clean. Unfortunately. And again, raw story is my favorite GoTo news site. I love them. But this headline is trash. It’s pure clickbait. Because the people they’re citing in this article, they’re not people from inside the Pence organization. They’re not quoting an article that spoke to people from inside the Trump organization or Pence’s office. It’s all people from NBC news and MSNBC, just random pundits who went out there and said this stuff, that’s not a source. You can’t just quote any idiot on corporate media and think, Oh well this is going to make a good headline. This is disappointing to see this coming from raw story. But you know what? I’m gonna I’m, I’m gonna go with it for a second because here’s something people need to understand. I’ve seen these conversations happen and we need to get something out of the way with regards to Mike Pence. Okay. Mike Pence is really not in that much danger right now. He could be in very near future. Sure. As this thing kind of gets flushed out a little bit, we’re going to see if Pence was involved and if he is, then yeah, he’s in trouble right now. We don’t have it, so let’s just hold off on that at the moment. But should Pence get roped into this, and this is what people have been talking about this. They’ve been saying, well, well great. Trump gets impeached. Pence gets impeached. Then Nancy Pelosi’s president, and unfortunately I got to go ahead and put the brakes on that for you right now. That’s never going to happen. It’d be awesome if it would, but it won’t. It’s kind of like the whole Richard Nixon thing back then. You know, Spiro Agnew, his vice president was embroiled in it too. So what Agnew did was he fell on the sword and resigned so that Nixon could appoint uh, Ford who was not involved in any of it so that Ford would survive and carry on and become the president. Of course, Nixon didn’t think he’d become the president, but that’s what happened. And that’s what would happen in this situation because we’re not going to end up with some kind of dual impeachment trial in the Senate. You’re not going to have both Pence and Trump sitting there while they’re lawyers make arguments and senators make arguments and the, uh, John Roberts make it. It’s not gonna happen. What would happen, assuming Pence did something that was impeachable, is we’d have to go through the impeachment of Donald Trump first, remove him from office. Then Mike Pence gets sworn in as president. Then he would go through his impeachment. But while that’s happening, actually the second he gets sworn in as president, he immediately asked to appoint a new vice president. So then if something happens, it depends, that Republican vice president, he picked my money would be on Matt Gates. Uh, Kevin McCarthy or Paul Ryan. Paul Ryan actually seems to be the most obvious choice. But anyway, then that person becomes president, they pick a new vice president and so on and so forth. Nancy Pelosi doesn’t have a shot at becoming president as a result of impeaching, both Trump and Pence. Now, back to the other point, suppose they do decide to do a dual impeachment. Then we’re looking at a Nixon Agnew Ford situation where Pence would immediately resigned. Trump gets to appoint in new person who’s not involved in any of this and that’s where the whole, that would probably be Matt Gates, scarily enough. Um, and then they go on and become president and then were all really screwed at that point. But anyway, that’s how the whole situation could play itself out under worst case scenarios for the Republicans. I don’t think we’re ever going to get to worst case scenario for the Republicans, and we’re certainly not going to get there with some trusted news organizations that I love dearly continue printing nonsense like this, claiming to have information when really it’s just a couple of yahoos on MSNBC stoking a conspiracy theory.