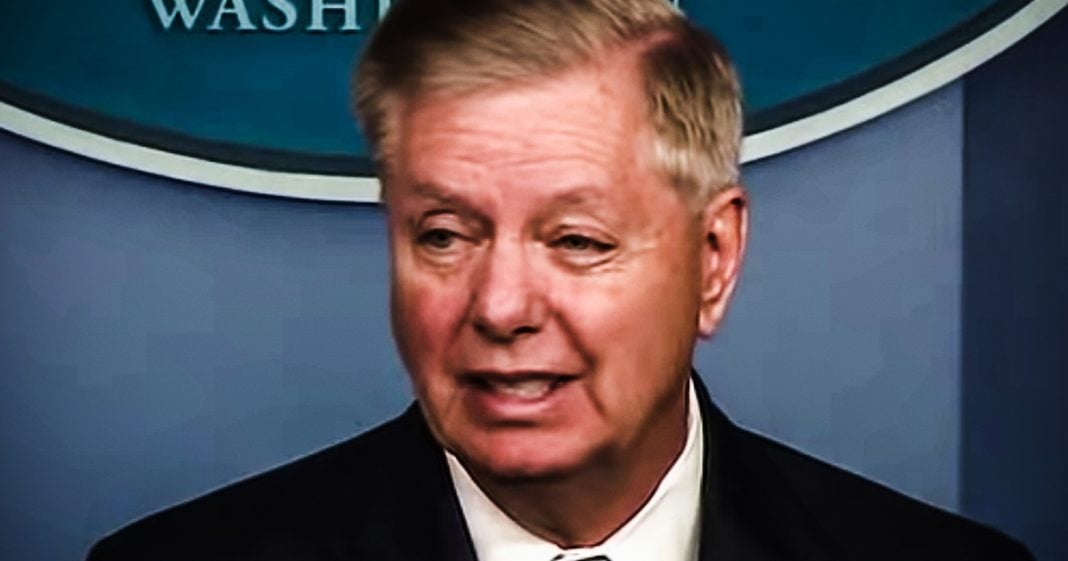 According to a new analysis by CREW, Lindsey Graham visits Trump’s properties more than any other lawmaker in Washington, D.C. In fact, he has visited Trump’s properties 50% more times than ANY OTHER lawmaker in DC. This helps explain Graham’s sudden turnabout with regards to his personal feelings about Trump, and Ring of Fire’s Farron Cousins explains what that means.

*This transcript was generated by a third-party transcription software company, so please excuse any typos.
You know, for the last year and a half, two years ish, a lot of people have been wondering what happened to Lindsay Graham. Right? All right, this is a guy who warned us. If Trump is the nominee, we will get destroyed and we will deserve it. And now he seems to be Donald Trump’s biggest defender and bestest friend. Well, according to a new report by citizens for responsibility and ethics in Washington, Lindsey Graham, since Donald Trump was sworn in, has, uh, visited Trump’s properties a grand total of 17 times, which is 50% more than any other sitting lawmaker in Washington D C the runners up are Rand Paul and Kevin McCarthy who have visited, uh, 11 times and Mark Meadows who’s visited nine times. But Lindsey Graham at 17 visits to Trump properties holds the record as the most visits by a sitting member of Congress or the Senate. Now, this does not in and of itself explain why Lindsey Graham flipped. But that’s what I’m going to explain right now, and no to dispel the conspiracy theories. It is not because they have some kind of compromising, uh, information about him. I don’t believe that for a second. Lindsey Graham is now and always has been a horrible human being. It’s just occasionally did a good job of trying to hide it. Well Lindsay Graham wants his power and influence. Lindsey Graham has run for president before, didn’t go so well for him, and so now he’s trying to cozy up to the president of the United States, So he can get a little bit of taste of that power. So he can kind of see what it’s like to call the shots. And maybe just maybe have the ear of the president on important issues. That’s why Lindsay Graham is doing what he’s doing. That’s why he made the 180 on Trump. It’s kind of one of those, if you can’t beat them, join them situations and Lindsay Graham is taking full advantage of that. This is not an accident that he has visited Trump properties more than anybody else in the Senate or the house. He’s doing it intentionally to Curry favor with the president of the United States. That’s what’s happening here folks. And it’s because he wants power and because he wants influence. I seriously doubt there was any kind of compromising information out there on Lindsay Graham. I take that back. I am sure there is compromising information out there on Lindsey Graham. Is it being held over his head by Donald Trump? No, that’s the part I don’t believe so. Let’s just make that totally clear. I’m sure Lindsey Graham has plenty of skeletons in his closet, but I don’t think Trump knows about any of them. Likely the public never will either, but Lindsey Graham is now and forever will be a horrible human being because that is what he’s been since the very first day he stepped onto the Senate floor.