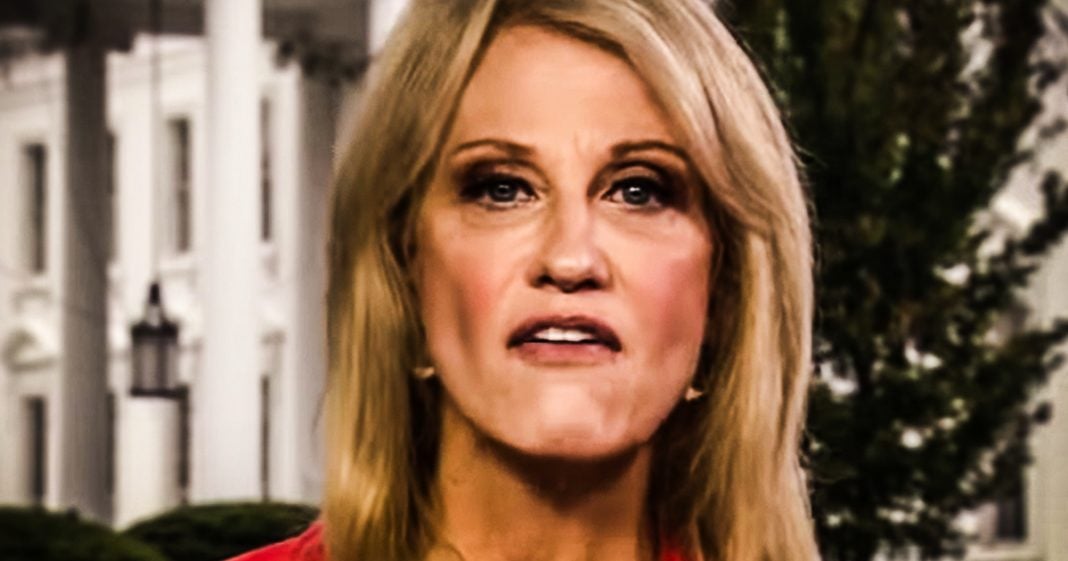 It has been quite a while since we’ve seen Kellyanne Conway on our TVs, and according to reporting by Politico, that isn’t an accident. The White House is deliberately hiding Conway from reporters and TV stations in order to avoid any more Mulvaney-type gaffes, and also to prevent her from blowing up at reporters again. Ring of Fire’s Farron Cousins explains what’s happening.

Kellyanne Conway was last seen on television two days after the Democrats announced their impeachment inquiry, and then suddenly Kellyanne Conway disappeared. Now this is all according to a report in Politico that says that the white house, not necessarily Trump himself, but the white house is doing their best to keep Kellyanne Conway away from reporters away from the public and off of our TVs because they don’t want her committing any gaffes like Mick Mulvaney did when he essentially did his little impromptu press conference and admitted that, yeah, there was definitely a quid pro quo with Donald Trump and the president of Ukraine. Now, Kellyanne Conway has not been one in the past to make gaffes like that. Yes, she said lots of stupid things. She said lots of things that were completely lie, but she hasn’t actually said something that is further implicated the president in any criminal activity. Right. She’s not a Rudy Giuliani.

She’s not a Mick Mulvaney. She’s not as Sarah Huckabee Sanders. Kellyanne Conway, as horrible as she is, actually does a good job of staying on message and doing nothing except defending the president. So it is a little weird that they would try to hide her from the public. You know, they’ve got nothing but horrible people. But out of all the horrible people, she’s the best at defending him. So that’s why this is a little bit odd right now. You would think they would want her out there. They would want her misdirecting, the public lying to the public doing all of these things because that’s what she does. So here’s my theory on why Kellyanne Conway has been put back into hiding right now, because again, this is also not the first time they’ve done this with her. They’ve had to hide her away for several weeks, for multiple different times in the past.

But here’s what’s happening right now. Donald Trump is obviously very unhappy with Mick Mulvaney. He did again, he went out there for his impromptu press conference, admitted to a quid pro quo in exchange for the aid that the U S was going to send Trump wanted information about the DNC server. And he said to withhold it if you didn’t give us that info. That is according to Mick Mulvaney. Trump doesn’t want anything like that. He wants Mick Mulvaney out as chief of staff according to reports, and again, according to reports, he wants to replace him with Kellyanne Conway. So Kellyanne Conway right now has to play cool. She’s got to be squeaky clean. She can’t go out there and say or do anything crazy. Kind of like she did last week when she threatened a reporter who asked about her husband or actually reported about her husband, Kellyanne Conway called the reporter. As we discussed last week.

It said, how would you like it if we start investigating your personal life? Maybe that’s what we’re going to do. Huh? And this was a conservative reporter by the way. And they don’t want anything like that happening right now. They want Kellyanne Conway to stay clean, to stay focused, to stay true because at the end of the day, she’s going to be the only one left in this administration. Now she has no credibility, but as long as she doesn’t embarrass herself too much or embarrass the president ever, she still has a very good chance of taking that top spot and becoming the next chief of staff. And that I believe is why she’s being hidden from the public.