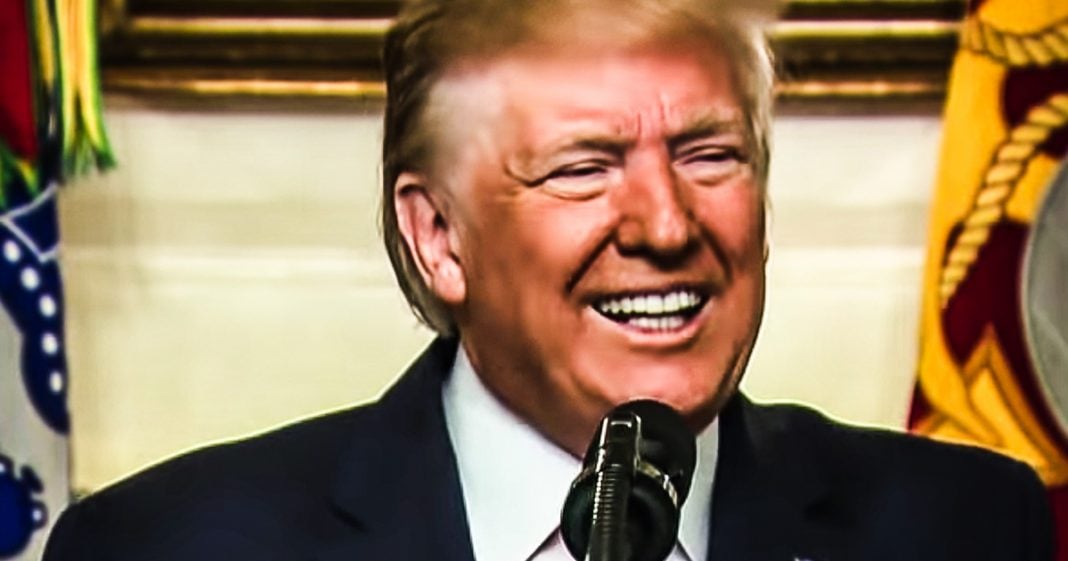 Donald Trump believes that the US is entitled to all of the oil in Syria, and he’s openly wondering if he should ask Exxon Mobil to help us go get it. This is the same man who just a few weeks ago told us that we had too much oil in this country and that we needed to start selling it. It also perfectly shows what US foreign policy is really about, as Ring of Fire’s Farron Cousins explains.

So yesterday in one of the most bizarre, uh, press conferences the president has ever given, he told us that we, uh, killed the leader of ISIS. Then he talked about how the man was running and crying and whimpering and died like a dog in the middle of a dead end tunnel. And okay, that’s weird enough as it is. But it’s what he said after all of that, that really stuck out to me. And here it is. We are leaving our soldiers to secure the oil in Syria. He’s talking about, and we may have to fight for the oil. Maybe somebody else wants the oil, in which case they have a hell of a fight. The oil is so valuable for many reasons. It fueled ISIS, number one. Number two, it helps the Kurds because it’s basically been taken away from the Kurds. They were able to live with that oil.

And number three, it can help us because we should be able to take some also. And what I intend to do perhaps is make a deal with an ExxonMobil or one of our great companies to go in there and do it properly. Right now it’s not big. It’s big oil underground, but it’s not big oil up top. Much of the machinery’s been shot in dead. It’s been through Wars. Okay, so things kind of devolved a little bit towards the end of that Trump quote, but the bottom line folks is that what the president just described doing is actually a war crime under articles 53 and one 47 of the fourth Geneva convention. They actually address that issue quite specifically because that’s what’s known as appropriation. You can’t do that under the fourth Geneva convention. And here’s the president on national TV, not only patting himself on the back, but then adding in, I’m going to go do a war crime, I’m going to get Exxon to go help me do a war crime because we just love our oils so dang much.

And this is a man who just a couple of weeks ago when those shoddy oil tankers were attacked, said, don’t worry folks. We got, we got plenty of oil here in the United States. We get so much for selling it. We’re the biggest oil producer in the United States. We don’t need anybody else’s oil. And then he says, Oh no, we’re totally going to take all of serious oil. Exxon’s going to help me, to hell with the Geneva conventions. Totally going to go commit these war crimes because I’m still living with this BC mentality of two. The winter goes the spoils and it’s illegal folks. But what he’s done here is he exposed the entirety of us foreign policy in the middle East. That’s what it’s always been about. It’s just the Donald Trump is the only one stupid enough to come out and say it publicly. He just exposed decades of us middle East policy with this one little very odd diatribe cause it’s always been about the oil always and it will forever be about the oil and how much money the U S can make off it. And so what experts are predicting is going to happen now, now that he’s said this publicly, is that this is going to actually embolden groups like ISIS. Because now they’re going to go out there, use this as a recruiting tool and explain it, unfortunately much the same way I just did because it’s very obvious and that’s going to help grow their numbers. So thanks a lot president Trump, because you’re either committing a war crime here or giving the terrorist the biggest gift they’ve received since George W. Bush decided to March into Iraq.