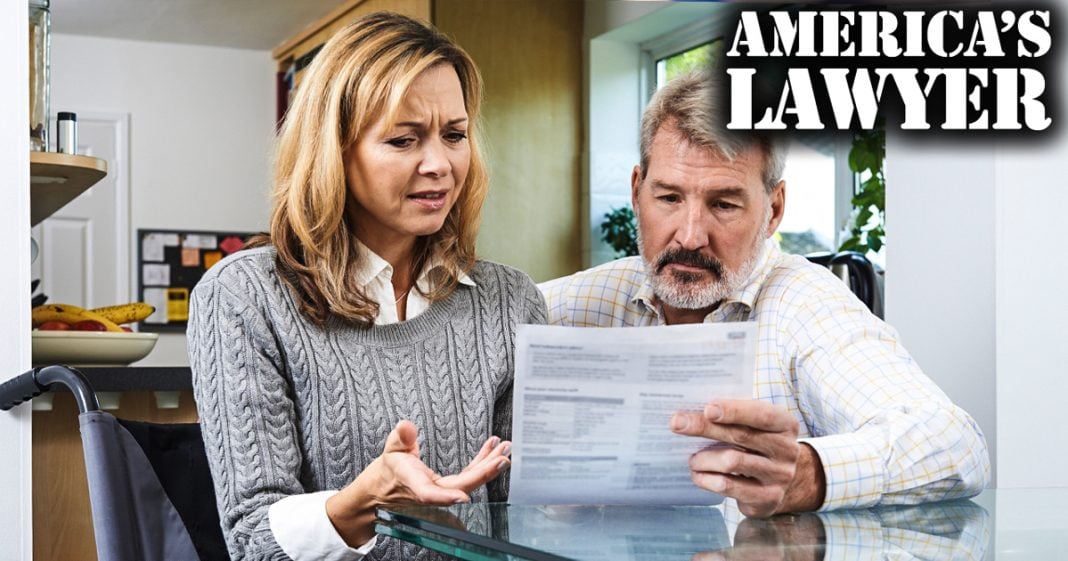 Via America’s Lawyer: RT correspondent Brigida Santos joins Farron Cousins to walk us through the frightening reality of medical debt collection, which often ends with incarceration should the debtor be unable to pay off their medical expenses and court fees. What’s more, these judgments are often ordered by individuals lacking a law degree. Why are people ending up behind bars when debtors’ prisons were outlawed over a CENTURY ago? Farron Cousins fills in for Mike Papantonio on this episode of America’s Lawyer.

Farron Cousins:                  A new investigation reveals that medical debt collectors are getting judges to issue warrants for sick people who are too poor to pay off medical bills. RTs Brigida Santos joins me now from Los Angeles with more. So Brigida, tell me about this investigation. You know, where did it take place and what did you learn?

Brigida Santos:                   Well, this investigation was conducted out of Coffeyville, Kansas and it was published by the nonprofit newsroom ProPublica. It reveals how medical debt collectors are basically telling judges who to send to jail for the crime of being too poor to pay medical bills. And here’s how it works. Defendants appear in court to testify to their poverty in what’s known as a debtor’s exam. They do this in front of a debt collector and a judge. That debt collector usually works on behalf of a hospital or a group of doctors or ambulance services and they present the defendant with their options. The defendant can agree to a payment plan to have their wages or bank accounts garnished or to have a lien placed on their property. Now if defendants do not show up to any of these debtors exams, the debt collector can then ask the judge to issue a warrant so that that debtor ends up in jail. And that’s what often happens.

Farron Cousins:                  So medical debt in America is obviously a huge problem. So what kind of people typically get sued by these medical businesses?

Brigida Santos:                   I mean, all kinds of people get sued and arrested over medical debt. In Coffeyville, for example, there was a pregnant woman who was arrested for missing a debt collection hearing regarding a $230 radiology bill that she had not paid. There was a father of a son, of a boy who had leukemia. Now he was arrested for being too to pay, too poor to pay off his son’s medical bills. And this list goes on. Some of these people are incredibly sick and it happens all over the country. Meanwhile, debt collectors are profiting. In Coffeyville, one debt collector who was interviewed said that he charges his clients a commission rate of one third of all the money that he collects.

Now some of that commission can even come from a defendant’s cash bail, which is absolutely crazy. Now in America, debt collection is an $11 billion industry with medical debt accounting for almost half of all total debt payments collected each year. Medical debt is usually taken on by consumers without any knowledge of the actual costs because our medical system is not transparent, people often don’t know what they’re going to be paying until they get that bill. And consumers often take on this debt knowingly because their lives depend on getting these treatments.

Farron Cousins:                  But debtors’ prisons here in the United States, those were outlawed long ago and the Supreme Court has ruled them unconstitutional. So in this particular circumstance, where’s the oversight?

Brigida Santos:                   There really isn’t much oversight. Now, the modern day debtor’s prison lives on, and we’ve talked about this on this show before, because judges can incarcerate defendants for failing to appear in court by charging them with contempt or by ruling that a defendant is purposely not paying the debt rather than being legitimately too poor to pay it. And many judges themselves don’t even have a law degree. Judge Casement was a cattle rancher. He was appointed a magistrate judge even though he’d never previously taken law courses and this is perfectly legal because Kansas does not require magistrate judges to have college degrees, and other States have very similar rules. So there really isn’t much oversight.

Farron Cousins:                  Absolutely unbelievable. Brigida Santos, thank you very much for telling us this story today.