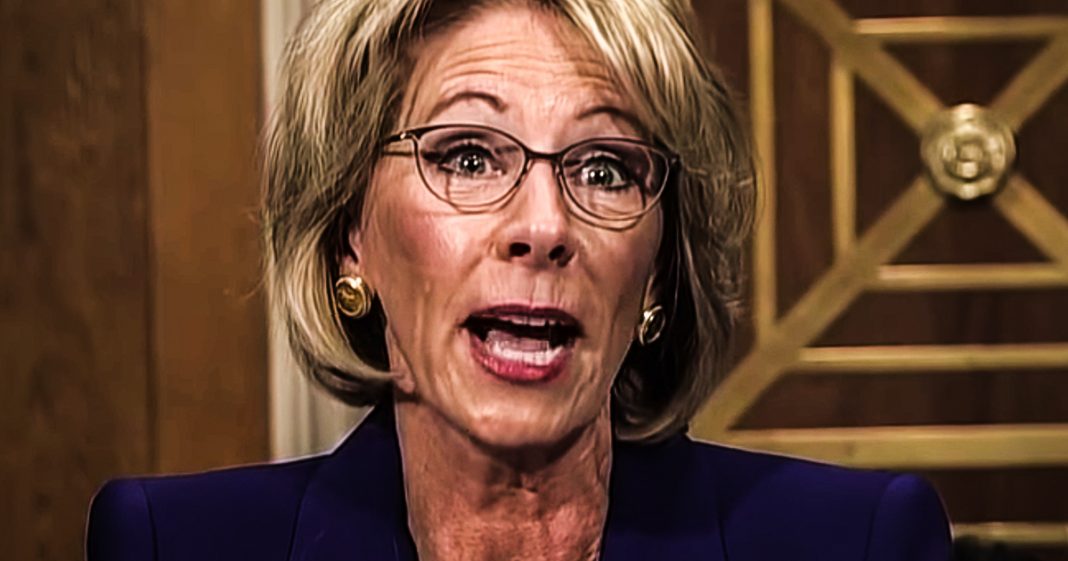 Education Secretary Betsy DeVos has been held in contempt by a federal judge after her department continued to collect student loan payments after they were ordered not to. The Department of Education has now been fined $100,000 by the judge, but DeVos won’t have to pay that money out of her own pocket. Ring of Fire’s Farron Cousins explains what happened.

Late last week, Betsy DeVos, the secretary of education here in the United States, was held in civil contempt by a federal judge because her department in the federal government refused to obey a court order from 2018. Here’s the backstory on this. It’s something we have explained in the past, but I’m going to run through it again really quick. 2018 judge comes out and says, Hey, education department, you can no longer collect any debts whatsoever from student loan borrowers who attended Corinthian college cause Corinthian colleges turned out to be a complete scam. They lied to students. They defrauded them. So do not take their money away because they took out loans to attend a fraudulent college. I’m protecting these groups. Don’t take their money to which the Department of Education said, Oh yeah, yeah, sure, totally. We’re not going to take their money. And then they proceeded to withhold their, uh, tax returns to garnish their wages, to issue liens against them because they were still taking their money.

So these students who knew the government could not take their money for their student loans anymore, filed a lawsuit against Betsy DeVos. And the Department of Education for violating the court order. Took it to court last week. The judge says, you know what, students, you’re right, Betsy DeVos is breaking the law. I am holding her in civil contempt and I am finding $100,000 open. Don’t worry, folks, the multi-billionaire Betsy DeVos isn’t going to have to pay that hundred thousand dollars out of her own pocket. She’s not going to have to go sell one of her 10 yachts to pay for it. Now that money is going to come out of the federal government itself, our tax dollars, so Betsy DeVos gets held in criminal contempt or civil contempt scares me and we have to friggin pay for it. How does that work? How is that a punishment for the Department of Education that’s punishing everybody who pays into taxes? That money should have to come out of Betsy DeVos’s pockets and you ought to up it by about a thousand percent because she can afford it.

The people, she was scamming the people she was illegally taking money from, they couldn’t afford those payments, but Betsy DeVos can. As I mentioned, this woman has multiple yachts. Her brother owns the private mercenary group, Blackwater. Her parents were billionaires. Betsy DeVos has the money in its own fare to take that money from the Department of Education of federal department that has already starved for cash to take our tax dollars and pay her fine. That’s not okay. That’s not something that any of us should be okay with. Yes, it’s great that DeVos got held in contempt and that somebody in this administration learned that they are not above the law and unfortunately, like everything else with this administration, it ends up falling back on us. The taxpayers, we’re the ones who ultimately get screwed in this.

Betsy DeVos should be forced to pay that fine herself. She has the money to do it and she’ll never ever miss it. But instead, taking $100,000 worth of tax payer money away from schools, away from school programs and handing it over to the court because Betsy DeVos decided to break the law.