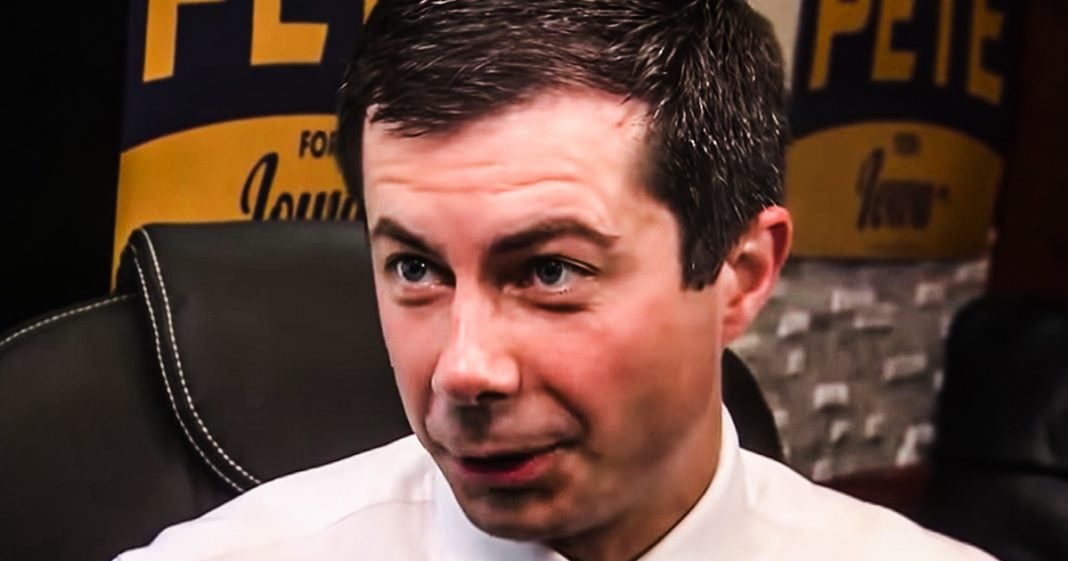 Pete Buttigieg’s campaign is running a disgusting new ad directly calling out both Bernie Sanders and Elizabeth Warren and their support for Medicare For All. Buttigieg in the ad says that the program would infringe upon our freedoms. What freedoms? The freedom to die from a lack of healthcare? Ring of Fire’s Farron Cousins explains why Buttigieg is nothing but a corporate shill and can’t be trusted.

So a couple of weeks ago, mayor Pete Buttigieg released in ad a minute long ad titled makes more sense and this ad was specifically attacking Bernie Sanders and Elizabeth Warren and their support for a Medicare for All program here in the United States. Bernie Sanders, obviously a little more involved and a committed to the Medicare for All idea. Elizabeth Warren has occasionally kind of a, you know, been back and forth on it, but she says she does support it. So Buttigieg wanted to go after these folks and he wanted people to know according to this ad that Medicare for All is going to infringe upon your freedoms here in the United States. Now, Buttigieg himself did not make that claim. That claim was made in the ad with a clip from CNN analyst, Joe Lockhart, but they felt it was powerful enough to include it in this ad because they believe, I guess that Medicare for All does infringe upon your freedoms.

And to that, I just have one question, mayor Pete, what freedom is that? The freedom. I have to not purchase my kids, their EpiPens for their severe nut allergies because I can’t afford $1,300 for the two. That’s the freedom I have right now, and that’s a freedom. I’m living with the freedom. I have to not be able to go to the doctor to find out why I can’t get rid of this cough after five weeks because that’s a freedom I have and that’s a freedom I’m currently living with or the freedom of people to have to travel to Canada to be able to buy insulin, the freedom of people to choose. You know what? I think I need to eat food and therefore I can’t afford my prescriptions. Or how about the freedom, and this is one few people talk about on this issue, the freedom to be stuck at a crappy job that you hate, but you’re too afraid to leave it because then you lose your health insurance may or Pete.

Those are the freedoms that the corporate for profit healthcare industry has given us today, and those are the worst freedoms anybody could ever have. Here’s a couple of quotes. These are from mayor Pete in this ad. “Medicare for All Who Want It” is different than Medicare for All because this gives Americans a choice and those choices are the ones I just mentioned. If you prefer a public plan like Medicare, like I think most Americans will, you can choose it, but if you prefer to keep your private insurance, you can. I trust Americans to make our own decisions regarding the type of healthcare that makes the most sense for each of us in our families. Listen up, mayor Pete, I know you’re a bit of a corporate shill here, but the truth is most Americans have no choice whatsoever in their insurance. The choices, you either have it or don’t.

I don’t have a choice of my insurance. The human resources department at the business I worked for chooses that for me and every December at the end of the year I fill out a little piece of paper that says, yes, I am going to have this insurance or no, I’m not. See, I have preexisting conditions as do my children, as does my wife, as do most Americans. My wife gave birth. That’s a preexisting condition according to health insurance. So even though I can’t be denied at the moment, according to the rules of the affordable care act that Republicans are trying to take away, um, insurance, if I were to go buy it on the private market would be absolutely through the roof and would eat up probably 90% of my paycheck versus it only eating up 25% of my paycheck now. So I’ve got to go to the 25 but I have no freedom of choice. You idiot. Most people in this country don’t,

and I am sick and tired of corporate shills like mayor Pete tried to go out there and act like I am everybody’s best friend. I speak lots of fun languages. I play lots of musical instruments and none of those things are qualifications to be president of the United States. Because you also in that list of great grand things you do, you make horrible decisions for your constituents as we’ve seen from the people of South bend, Indiana, you cover stuff up. You covered up the death of a black man at the hands of police officers. That story is still being fleshed out a little bit. Mayor Pete, you would have an amazing shot at being president of the United States if you just switched your registration from Democrat to Republican, but as long as you’re running as a Democrat, calling yourself a Democrat, then I’m going to keep calling you out because you’re not a Democrat and you’re dang sure not a progressive, you’re a corporate shill and in time everyone on the left is going to come to understand that.