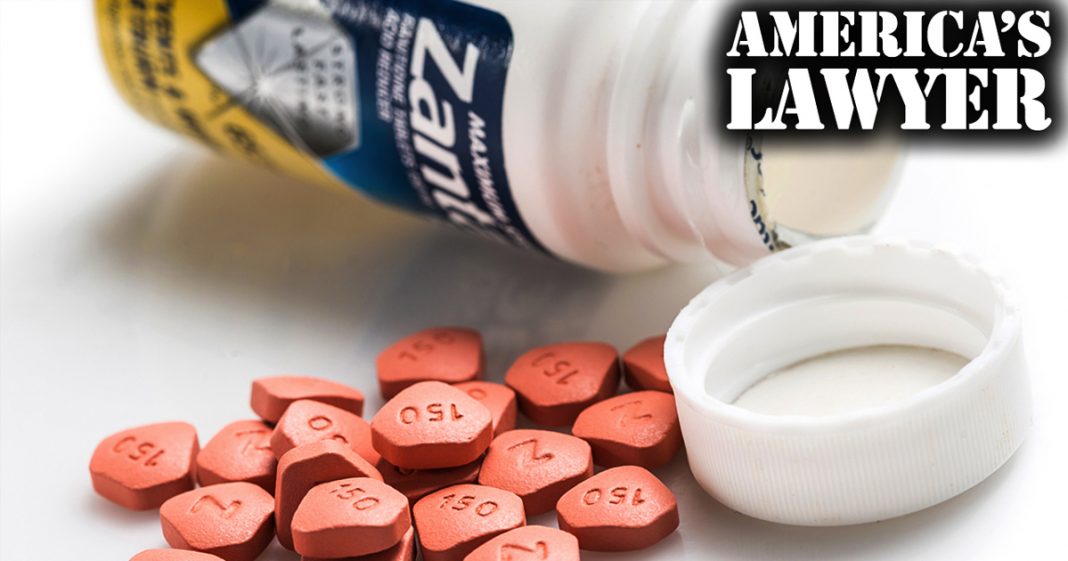 Via America’s Lawyer: Filling in for Mike Papantonio, Trial Lawyer Magazine editor Farron Cousins hosts attorney Daniel Nigh, who is spearheading litigation against manufacturers of the popular heartburn relief aid Zantac. The FDA has issued warnings to consumers that Zantac is contaminated with a chemical known as NDMA, which has links to bladder, stomach, kidney, and prostate cancers. But why has it taken YEARS to uncover these troubling findings, and what does this mean for the millions of Americans that have taken the popular drug?

Click here to learn more about Zantac side effects and lawsuits.

Farron Cousins:                  Everyday millions of Americans take medication to reduce or eliminate heartburn and unfortunately, the past few years have offered up nothing but bad news for some of the most popular heartburn medications out there. Recently reports began surfacing about Zantac, saying that the medication contains a compound that increases the risk of cancer. Joining me now to talk about this is attorney Daniel Nigh. So Daniel, let’s start at the top now. What exactly is Zantac used for? What’s the problem that we’re seeing?

Daniel Nigh:                          Well, there are multiples of them. There might be too many to list here today, but I’ll tell you some of them that are probably the most concerning first bladder cancer, very concerning. There are studies out there already that may support a significant increase in the risk of bladder cancer from taking Zantac. Stomach cancer is another one that we’re very concerned about because as you ingest Zantac and it breaks down inside of the stomach, we’re seeing that there’s potentially hundreds of thousands of NDMA nanograms inside of the stomach. So bladder cancer, stomach cancer another one that will, we likely think is going to be is kidney cancer, prostate cancer. All of those very problematic if you’re ingesting Zantac over a long period of time regularly.

Farron Cousins:                  And this is a drug, as I mentioned, millions of people take this. I mean, this is not some obscure prescription drug. This is over the counter. I can walk into a drug store right now, the ones that still have it and purchase this thing. But, but we have seen lots of stores yanking it off the shelves rather quickly here because they understand what’s happening, right?

Daniel Nigh:                          That’s right. So you can, there’s this company known as Valisure that has filed a petition. They’re a pharmacy company that’ll test medications to see if there’s impurities or carcinogens that are inside of a medication. So they actually seem to, I wouldn’t call it discovered this problem, but really started to put attention on this problem with one of the petitions that they filed. You can look at this petition, you can see the, the evidence that they’ve combined for multiple past journal articles combined with their own lab testing that they’ve done on the medication. And you can see it’s a substantial problem.

That’s why we think that people like CVS and Walgreens have immediately pulled this off the shelves because there’s, there’s almost no doubt when you look at the data that’s out there, that this is a substantial health crisis. And that if you’re taking val, or if you’re taking Zantac today, I’d recommend that you go have a conversation about your doctor with it immediately.

Daniel Nigh:                          Well, the FDA hasn’t been that great so far in really explaining what the issue is and I think it’s, it’s really important that the public understands this. There are multiple other countries out there that have taken much stronger action from their regulatory authorities because it seems like they’ve understand what the issue is. The FDA early on was taking a look at this and they were testing just that the pill itself and they were seeing is there any NDMA in it? And they were seeing low levels. That’s not what the problem is. This is not a manufacturing contamination where NDMA is in the pill, the problem is the molecule breaks down inside of the body when it’s combined with nitrates in the stomach.

So if you eat pizza and you have a Zantac, which is one of the ways that it was advertised, you’re going to see hundreds of thousands of nanograms breaking apart in the stomach when that occurs, or our own DDH enzyme in our kidney or other organs may also be sharing off millions of an nanograms of NDMA. So it’s the way that the molecule breaks down inside of the body. It’s not whether or not there’s NDMA in the pill before it even breaks down. That’s the problem.

Farron Cousins:                  So, so we’re not looking at a say something like Valsartan. Valsartan is a drug that had become, I believe, contaminated with NDMA during the manufacturing process. That obviously caused a lot of problems. You’ve worked extensively on that.

Farron Cousins:                  That weren’t necessarily, you know, a, I guess foreseen by the company. It’s not something you can, as you said, find in the pill, but we’ve got to take better looks at what happens once you ingest this. It’s not just what’s in it, but there’s chemicals in your body. There’s, you know, very real chemicals in these drugs.

Daniel Nigh:                          That’s right. And, and, and a couple things like I’m not so sure if the company who first developed this GSK had no idea of this problem. You know, we see once we get into the eternal documents and litigation, you know, we discover issues all the time about how they were hiding science. I, from the signals that I’ve seen in this case, I wouldn’t be surprised if they were trying to bury science in this case. But, you know, the other parts of it are, yes, it breaks down into potentially millions of nanograms inside of the human body. It’s not like Valsartan where the contamination happen at a manufacturing facility. This is, the molecule itself is designed in such a way that it breaks down inside of the body and it’s been doing this since Zantac was on the market 30 years ago, over 30 years ago.

Farron Cousins:                  Zantac is a problem. No, it’s Zantac’s always been a problem. We’re just now recognizing what the problem is and how, you know, the, the science has evolved.

Daniel Nigh:                          That’s right. So people have been regularly taking Zantac. They may have been taking it for 30 years. They’ve been having probably over those 30 years, it’s been breaking down into hundreds of thousands, maybe millions of nanograms of NDMA inside of their body that puts them at a very substantial increased risk of getting cancer because of that NDMA.

Farron Cousins:                  We’ve seen other proton pump inhibitors, Prilosec, Nexium, they’ve got their own problems, you know, with, with kidney issues, kidney failure, this, Zantac, this is a totally separate issue because I know a lot of people when they look up heartburn medication lawsuit, they need to understand these are two separate problems. Correct?

Daniel Nigh:                          Well, you know, this cancer is not something you’re going to get from one time that you take the pill. Okay. This is something that’s happening over a long period of time. So the viewers who are looking at this and they’re worried that they took something in the last 24 hours, it, you’re not going to be able to ex, you know, get rid of the NDMA that’s being broken down inside of your body. That one time you took the pill in the last 24 hours, that’s not the worry. The concern is you’ve been taking this over regularly over a long period of time, might even only be as much as over a year of time to be able to develop this cancer. You’d need to have a conversation with your doctor about this problem and speak with your doctor about potentially switching to some other type of medication or some other way to treat your heartburn.

Farron Cousins:                  But probably a conversation that they need to have, you know, sooner rather than later, right? Because this…

Farron Cousins:                  Is there any bioaccumulation here? I mean, does the MDA, NDMA, excuse me, does it get flushed out? I know it’s still causes the damage, but does it build up over time and stay there or does it kind of cause the damage and head?

Daniel Nigh:                          It has a pretty short half life. So in terms of the bioaccumulation at these levels, I don’t know that we’re certain about what occurs. Now, what we do know is that when they measured the amount of NDMA inside of people’s urine that we’re taking Zantac compared to those who were not taking Zantac, the Zantac users had over 400 times the amount of NDMA in their urine. So we know a lot of it flushes out, but we also know that if that much is flushing out, then there’s a lot of it that’s being absorbed inside of the organs before it gets outside of the body, like the bladder, the kidney, the stomach, you know, those things that talked about earlier.

Farron Cousins:                  Right. And, and so, one last question because we’re dealing with science and, and the different foods you eat have different chemicals in them. Does the diet also change how much NDMA may be in a person? I’m not asking for a specific list of bad foods, but would we see a difference in somebody who maybe has one diet versus another? Both on Zantac.

Daniel Nigh:                          You may. So, people who have a lot of nitrites, like if they’re eating pizza at the same time that they’re taking an NDMA, they’re gonna we, we can see that they’re gonna likely have hundreds of thousands of nanograms that are being broken down because of that. Somebody who happens to have a diet with virtually no nitrites, probably may not be seeing the breakdown there, but they still might be seeing the breakdown because of their DDH and their kidney. The enzymes there can also break it down. So I don’t think they’re out there, they’re in the clear, that’s still something that we’re very concerned about. Now in terms of just people, normal diets, I mean, if you have a lot of bacon in your diet, that’s something that’s been shown to increase your risk of cancer just alone without Zantac. What I will tell you though, is the amount of NDMA in Zantac is thousands of times higher than any bacon.

Farron Cousins:                  Wow. Daniel Nigh, thank you so much for telling us this story. I know the science is very complicated, so thank you for helping break it down so that we can understand it.