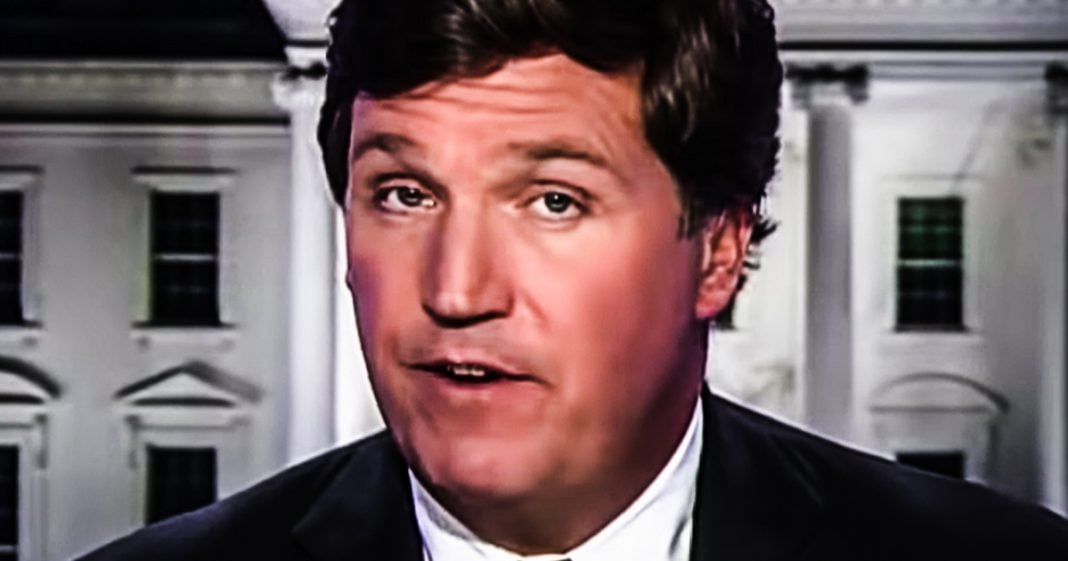 In a truly bizarre op-ed on Fox News, host Tucker Carlson says that it is CNN, and not Fox, that is actually the state-run propaganda outlet. He is basing this off a Project Veritas video that was likely edited to portray CNN President Jeff Zucker in a negative light. But Project Veritas has ZERO credibility, and the same can be said of Carlson. Ring of Fire’s Farron Cousins discusses this.

*This transcript was generated by a third-party transcription software company, so please excuse any typos.
Earlier this week, Fox news host, Tucker Carlson decided that he wanted the ride and op-ed for Fox news.com and he did any titled it, Jeff Zucker. CNN is the very definition of state media and America doesn’t watch it. Now, I read this article as best I could. Tucker Carlson is not a great writer, but he claims as he does in the headline that CNN is somehow now state media a state run propaganda media outlet that nobody watches. Now, here’s the reason Tucker Carlson is even coming forward and trying to make these claims, uh, project Veritas the discredited uh little group run by James O’Keefe has put out a new video that allegedly show CNN, president Jeff Zucker going out there and talking about how much they hate the president and how great impeachment is and blah, blah, blah. Okay? There’s actually nothing wrong with that. The man is also a private citizen. He’s allowed to be excited about things, but every one on the right seems to think that this means that. Yep. CNN hates Donald Trump. It is apparent in their programming. Man, we got CNN. No, no, you didn’t. Jeff Zucker sucks. CNN sucks, so does Fox and MSNBC. Here’s the thing, I don’t watch cable news and I never have. I will turn it on. If there is an election and we’re watching the returns come in, I typically mute it cause I can’t stand to hear any of them give their analysis. Doesn’t matter which network I’m watching. Other than that, I do not watch it because I read, I look for news, I check different sources. That’s kind of part of my job, but never have I ever thought CNN was bad because they hated Trump. No, CNN is bad because they’re owned by corporations. Just like MSNBC, just like Fox news. Corporations have agendas and that’s what’s driving the programming at every single one of those corporate media outlets and sure to a degree all of them could be described as a state media outlet. Obviously Fox news where Tucker works certainly in the pocket of Donald Trump, his hosts talk to him on the telephone every day, every day according to reports. They will go out of their way to twist and warp reality to fit whatever the narrative the president’s trying to sell that day. Fox news is state run media when it looks like we’re on the brink of war and the Pentagon needs an outlet to go out there and push us right over the edge. That CNN, thats CNN state run media, they love selling war. They love having war because it’s great for their ratings because people do seem to think CNN is really in the middle there just fair and balanced and when it comes to war, you want fair, you want balance. And that’s why I see it in loves a good war. Their rating spike during Iraq and they’d been desperate to come back ever since. So yes, in a way CNN is also state run media, MSNBC, sorry folks. They’re cheerleaders for the centrist corporatist wing of the democratic party. That is what they are. They’re anti progressive. They bring their hosts on every weekend to make crap up about Bernie Sanders and attack him for things that aren’t even true. Yeah, they’re in the pocket of the democratic party but not the good part of the democratic party. The crappy part, the part that keeps tanking the democratic party. That’s MSNBC. So yes, they could also be classified as state run media for that particular purpose. The truth is they all suck. They really do. They bury the important stories. They barely talk about climate change, which is the biggest threat to our country. They go with over-hyped, sensationalized mostly false narratives because it fits their vision, but more importantly because it brings in the eyeballs and at the end of the day that’s what all these outlets, even Tucker’s Fox news, that’s what they’re all about. You have to get the eyeballs so you can bring in the ad dollars and they will do what ever their particular government entity wants them to do. If they think it’s going to bring them a couple more dollars. CNN is no worse than the rest, and they’re all also no better than the rest. But we do have to laugh a little bit at the irony of Tucker Carlson accusing any other network of being state run propaganda when there is no worse state run propaganda in this country than what’s coming out of Fox news today.