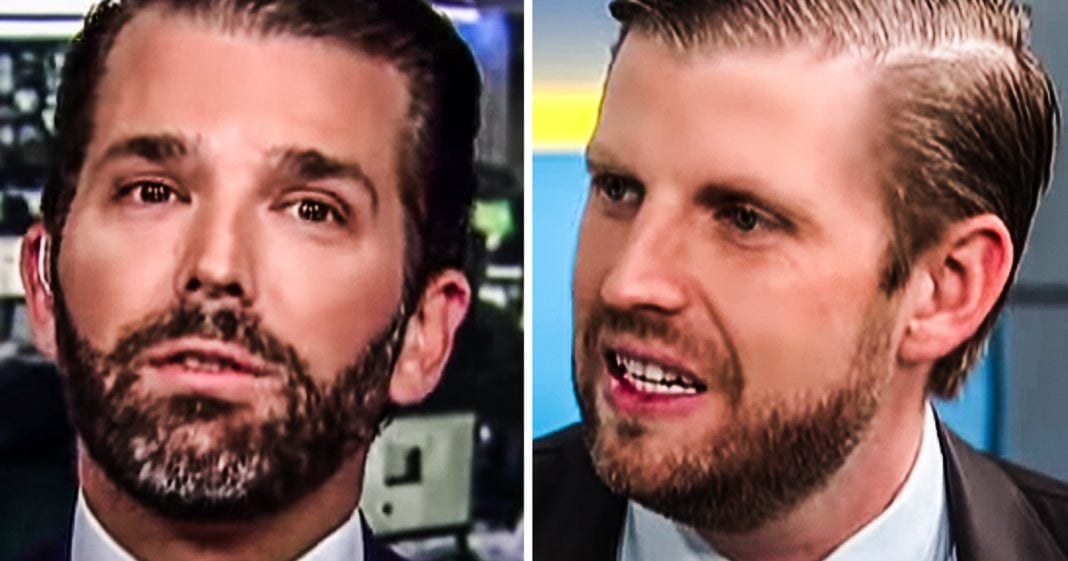 Both Donald Trump, Jr. and Eric Trump spent most of the week attacking Hunter Biden as being “corrupt.” Whether or not that statement is true is almost irrelevant at this point, because the two men pointing fingers at Biden are both literally the subjects of multiple different corruption investigations (unlike Hunter.) Ring of Fire’s Farron Cousins explains why the Trump boys should probably just sit this one out.

*This transcript was generated by a third-party transcription software company, so please excuse any typos.
Now would be a really good time for both Donald Trump jr and Eric Trump to just shut up. All week we have seen both Don jr and Eric make the rounds. They’ve popped up at Trump’s rallies, they’ve been on Fox news. They have been on Twitter, always talking about how corrupt Hunter Biden is. They have both repeatedly claimed that the only reason Hunter Biden was able to get this cushy little job over with Ukraine gas company is because of his last name because of who his father is, and they say that that, Oh my God, this child cashing in on his father’s name. That’s just the worst thing they could ever imagine. A man named Donald Trump jr thinks it’s horrible that somebody would cash in on daddy’s name when he literally has his daddy’s name. Eric Trump, same way you’re riding that last name. If your last name wasn’t Trump, Eric, nobody in this country would know who you are. You wouldn’t have a penny to your name and you would be just like the rest of us, but you’ve been riding those Trump coattails since the day you were born. Much like your father himself. You are your father’s son, Eric, and of course Don jr. But again, this is probably a good time to shut up because your guilty of the exact same things you’re accusing Hunter Biden of being guilty of. And let’s be very clear about something. I am no fan of Joe Biden. I do think it’s a little bit unethical that his son got this job, but that doesn’t mean it’s illegal. Hunter Biden has not with anything involving the Ukraine, been accused of any kind of wrongdoing. Folks, we have to remember that whether you love buying or hate Biden, that’s irrelevant here. Hunter Biden hasn’t been accused of any criminal activity. Donald and Eric have. In fact, Donald and Eric are banned from sitting on the board of a charity in the state of New York because they were so corrupt. There’s also still lawsuits ongoing about that. There’s other investigations going on into Eric and Don jr right now. There are no investigations, certainly no criminal investigations going on into Hunter Biden. So I asked you why are Beavis and Butthead out here still talking about this? Surely they’ve got enough brain cells functioning to understand that every time they bring up a Hunter Biden, all it does is shine a bigger spotlight on the nepotism happening in their family and the corruption that both of these have been accused of. Hunter Biden hasn’t been accused of anything yet. The Trump boys have. Maybe again, it’s time for them to just let this one go because they’re not going to come out on top of it.