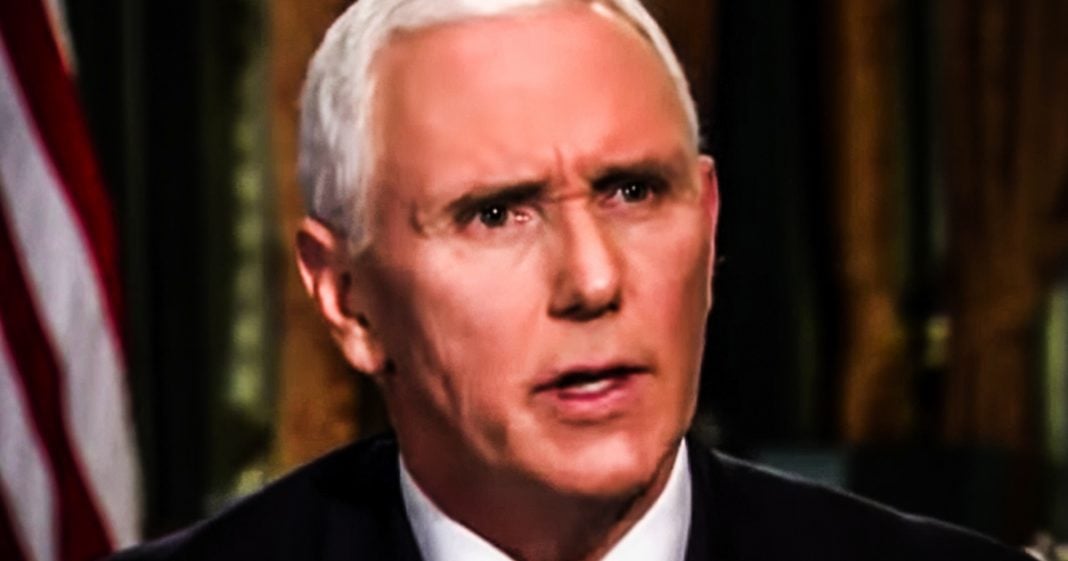 Vice President Mike Pence has now gotten in on the obstruction of justice action from the administration by refusing to hand over documents related to Ukraine that House Democrats had asked for. Pence doesn’t have much legal ground to stand on with regards to denying the request, and this is likely to set up another court battle that the Trump administration is ill-equipped to handle. Ring of Fire’s Farron Cousins discusses this.

*This transcript was generated by a third-party transcription software company, so please excuse any typos.
Vice president Mike Pence has not necessarily been very outspoken about all the scandals of his boss or his party. But this week he decided he was tired of sitting on the sidelines. And damn it he was going to get in there and get in on the action. And he did it by helping to obstruct justice. On Tuesday of this week, vice president Mike Pence, through his attorney, made the announcement that no Democrats, I will not be turning over all of the documents that you have requested from me with regards to the Ukraine. And I’m not going to do it because you lack the standing to force me to do it. See, Mike Pence is trying to, uh, use some legalees here to get himself out of trouble. And it’s not gonna work because this isn’t a law suit. This isn’t a criminal trial. And Mike Pence and his attorney know that, but they’re hoping they can at least postpone the inevitable. Here’s what it is. If you want to Sue anybody in this country, you have to prove that you have standing. In order to have standing, you have to be a victim of something. In some form or fashion. Now, depending on what it is, the issue of standing is very easy to obtain or very difficult to obtain. That’s just the way it is. That’s why we can’t just sue fossil fuel companies for climate change kind of hard to prove that their particular pollution caused the climate change that is somehow directly affecting your life. We can prove that we know what’s happening, but under the eyes of the law, you can’t do it and that’s just the best way I can explain standing, now for Mike Pence, his argument here saying the Democrats do not have the standing because they haven’t made a formal vote to launch the impeachment inquiry. That’s still wrong. That’s still wrong because even without a formal vote on impeachment, which isn’t even necessary, folks again, constitution very vague about it on purpose, but that doesn’t change the fact that these committees still have subpoena power. They still have the authority and ability to request documents even if it’s not a part of an impeachment inquiry. Therefore, Mike Pence, his claim falls flat on its face. There’s no legal basis for it whatsoever. The Democrats or any house committee really can subpoena those documents because they are looking into this issue. So that is the, the legal argument that is basically being set up right now that yes, we’ll eventually end up in court. But I do think it’s a little comical that Mike Pence has decided now to that yes, I’m going to get in on the obstruction action. And I also find it that any Republican in this country or any Trump supporter in this country thinks that it’s totally normal for the white house to say they won’t comply with any subpoenas for the vice president to say he won’t comply with any subpoenas for the president’s lawyer to say he won’t comply with any congressional subpoenas for the Pentagon this week to come out and say that they won’t comply with any subpoenas. All of these people who refuse to hand over documents or give any testimony, wow. They clearly have nothing to hide. Right. In spite of the fact that they’re all very obviously hiding. If you think this is a witch hunt, if you think that this white house and Pentagon and vice president and and personal attorney of the president, if you think they don’t have anything to hide, then you are absolutely lying to yourself. Because literally right now the only thing they’re doing is trying to hide everything.