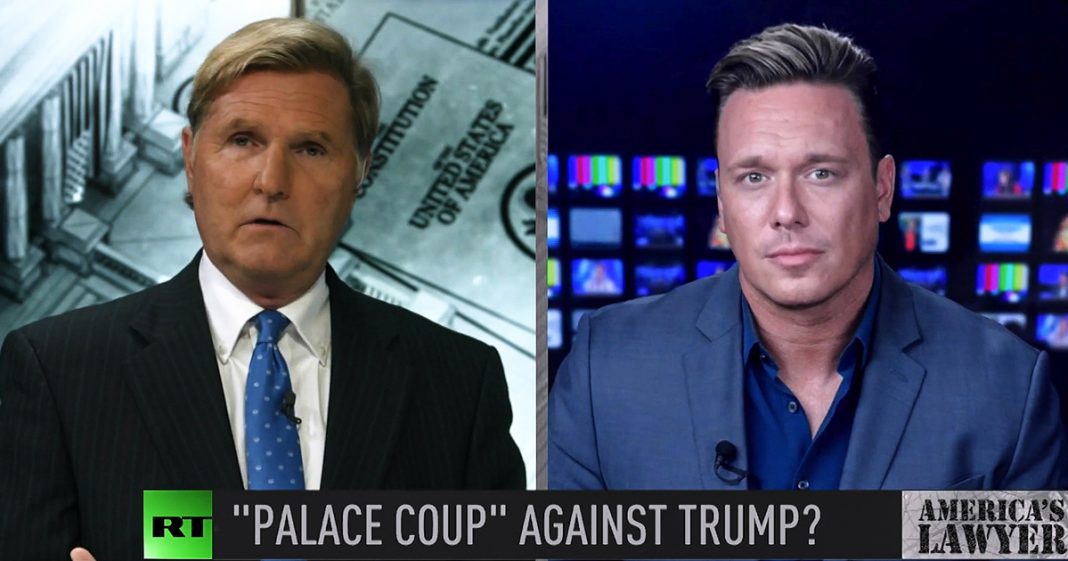 Via America’s Lawyer: Investigative journalist Ben Swann joins Mike Papantonio to break down the cozy relationship between federal intelligence agencies and the media. We’ve witnessed a laundry list of leaks dating back to Russiagate, but could these leaks be part of a grand scheme by the FBI and NSA to defame and ultimately unseat the President in a “palace coup?” Newly-released video from Project Veritas showcases the blatant bias within CNN, pushing impeachment coverage above all else.

Mike Papantonio:             Speculation continues to swirl around Washington regarding the exact identity of the informant who publicized Trump’s exchanges with Ukraine, but many have their doubts that this leak can be traced back to an individual. After all, we’ve seen a cozy relationship develop between the federal agencies and the media when it comes to leaking information throughout the Russiagate narrative. Some are pointing to these leaks as concerted efforts among the intelligence community to take down the presidency. Joining us, joining me now to talk about this is journalist, Ben Swann.

Ben, you know, I’ve followed your work for a long time. I’ve followed you on this issue. I think if I were to say who are the most important people talking about this, it would be you and Matt Taibbi. Taibbi came out with a, an excellent, excellent article. Give me your sense of this, this thing that Taibbi calls the leak coup, the, this, the, the coup that’s taking place through our, through our intelligence agencies where they’re trying to determine what American political policy is. Give me your take.

Ben Swann:                           Yeah, it’s, it’s a really interesting idea and, and as you said, it’s, it’s something that we’ve talked about quite a bit. And it really comes back to if you, if you really study this issue and what has been happening with this so-called whistleblower in this particular instance. And they’re, by the way, this latest whistleblower that’s kind of the, the center of the impeachment inquiry is just the latest in an example of what’s been going on with leaks since the day that president Trump took that oath of office and became president of the United States and even a little bit before that. And so what we’ve seen is just a culture of leaking that’s been going on for the purpose, the express purpose within the FBI, the CIA, the NSA, to be able to damage this president and to remove him from office.

And you don’t have to be a fan of president Trump. You don’t have to like him or dislike him to recognize that there is a new serpent of power that’s taking place here that is dangerous, not just for this administration, but for every administration moving forward as well. One thing that’s very interesting is just before president Obama left office, you know, there had been essentially three agencies that had received most of the intelligence briefings, the NSA, the FBI, and the CIA. And upon him leaving office about eight days before he left, that was suddenly expanded into almost 18 agencies that received all these intelligence briefings.

And the reason for that a lot of us have speculated is in order to create kind of a diffusement of not being able to trace exactly where the leaks are coming from or who was putting them out. And so it’s been successful so far. This latest example with this Ukraine whistleblower, if you even call this person a whistleblower, which I would not. I think is a good example.

Mike Papantonio:             Ben, let. Yeah, first of all, this man is not a whistleblower. Okay. There’s a reason Schiff does not want to call him to testify. I’ve said this before and I want to say it again right now. If the Democrats lose again, it will be because of Schiff and Nadler. Okay. I can’t say, I can’t emphasize that enough. Look, there’s very few things I like about Trump and you if all you have to do is follow this program to understand that.

Mike Papantonio:             But we’ve got to, when Matt, Matt Taibbi came out with the, with the article that he came out with, it has to make you think, here’s what Taibbi said. He says, what’s happening is the intelligence agencies, whether it’s NSA, NSA, CIA, FBI, they have made their, an unfettered foray into American political policy.

But now they’re back and the little, and the people they’re using are Schiff and Nadler. And, and what the public seems to be missing is whether you like Trump or not, I have no, I have no admiration for Trump, but I do have admiration for the political process called democracy in this country and right now the spook agencies are controlling political policy in this country. What’s your take?

Ben Swann:                           No, you’re absolutely right. Look, I do a podcast. I recently interviewed Thomas Drake on this and he was the original NSA whistleblower or a true whistleblower, right. And one of the things he says is that the NSA used to go around, they had this saying where they would say, it doesn’t matter who the president is because the NSA was here before them and we’ll be here after them. And that they had this culture within the NSA that they were the, you know, much more powerful than anyone in the executive branch. And there’s, and there is truth to that.

But the other thing that’s very important here, and you’re absolutely right when you say, you know, this process by which Nadler and Schiff running this thing, which is a joke. The whole thing is a joke. I mean, if you believe that there is actually a violation of high crimes and misdemeanors by this president, all of this should be out in the open, not happening behind closed doors where even members of Congress are not allowed to see what’s happening. That’s insane. But let’s talk about the concept of what’s going on here with the CIA. This person is a CIA operative. We know that about them. We know because of the New York Times who leaked that out.

And it is scary to think how much in hand the CIA, the NSA and the FBI are working with not just those on Capitol Hill but also my, with the media to be able to shape all of this information to leak what they want out. You know, leaks are a very dangerous thing. Not because, you know, I want there to be hidden information. Leaks are not a disclosure of information. They are the shaping of information because you don’t get the full picture.

Mike Papantonio:             Ben, here’s, here… Here’s what we can’t ignore. Okay. It’s almost like it’s, we don’t teach civics in school anymore. There’s no appreciation for the idea that you don’t let the intelligence agency take over public political policy, but here’s what we’ve seen of our intelligence agencies lately. Kidnapping of foreigners, assassination by drones, network, network of secret prisons that we don’t even know about. Spying on Americans without any regard to any rules or regulations, and now we have this thing and here it is, warrantless searches I can add to that, but now we have this thing is where they manipulate the media. Look, you got Clapper, you got Brennan, you’ve got Comey, you’ve got all of these cats that come from the spook agency that are now working for CNN, MSNBC.

Mike Papantonio:             Why did that happen? Because CNN and MSNBC allowed this fantasy story to be created by the very agency to now they’re hiring these people to come on and get paid to keep that story alive. Schiff, how bout Schiff? Schiff is now having to backpedal and say, you know, we’re not going to have a public hearing of this so-called whistleblower who is anything but a whistleblower. This guy is a plant by the spooks. It’s generated by the spooks. Schiff knows it and Schiff is their go to boy. He’s nothing but a boy for the intelligence agency, just like Nadler is.

For, he is at the beck and call of the CIA, NSA, FBI, anybody that wants Schiff to jump, he simply says how high? And those are the people that are running this whole narrative that undermines democracy and we’re not even talking about this. Try to turn on a television show where they talk about this topic and they don’t.

Mike Papantonio:             They look behind the topic and they, and they finally understand this coup, you know, this may be a coup of leaks. It may be a coup of controlled narratives. It’s no different than the coup that, that almost took place in Russia in 1992 that was this close to success. And so Matt Taibbi, brilliant journalist, along with you, a brilliant journalist, you guys have been looking at this a long time. But you try to get corporate media to pay attention to it, they can’t because these same spooks are now part of their organization. What’s your take?

Ben Swann:                           Well, they, they are they’re, they’re a part of the organization. But the other thing that they’ve done is they funnel as agencies like the CIA will funnel money into these so-called NGOs that then spend money with these media, media companies. And so you have, you have this cyclical relationship where as you said, you know, these guys are creating essentially policy working in these spook agencies. They then move into some position as a contributor working for news agencies, continuing to feed them information.

We see the leaks that have gone out and, and are kind of spread through all the media and we’re just continuing to happen even in this so-called impeachment inquiry process. It’s, it’s just one leak after another. There is no rule. There is no process, right? There’s no legal precedent to say this is the way you’re supposed to conduct an impeachment inquiry and it doesn’t really exist. A lot of it’s just precedent. But unfortunately what’s happening now is such a sham that I think the majority of people who are watching it are going to just say, this is becoming more and more grotesque, the more they see it.

Mike Papantonio:             Exactly. Hey Ben, I want to take a listen to a video that was released of CNN employees discussing their networks impeachment coverage. This gives you an idea why all these spooks are working for CNN. Play that if you would.

Ben Swann:                           I don’t think there’s a single person who can watch any of that who was surprised by it. I think we would all see it and say it’s exactly what we thought it was. It may be more, a little more visceral and explicit, but it was exactly what we’ve known that it was. Lastly, I think what we also see this whole thing happening with the military industrial complex as well as not just the, those, those CIA, FBI, NSA agencies, it’s also the Pentagon that continues to feed us war and the media plays right along. They all repeat the same narratives over and over and over, and it’s a shame.

Mike Papantonio:             God forbid we should, God forbid we should call off all the Wars. Go back and read Howard Zinn, I know you have. Right now, I gotta tell you something. There are two people I rely on to talk about stories like that, You and Matt Taibbi. Let’s keep talking about this. Maybe we can shame corporate media into doing their job here too. Thanks for joining me, Ben. Okay.