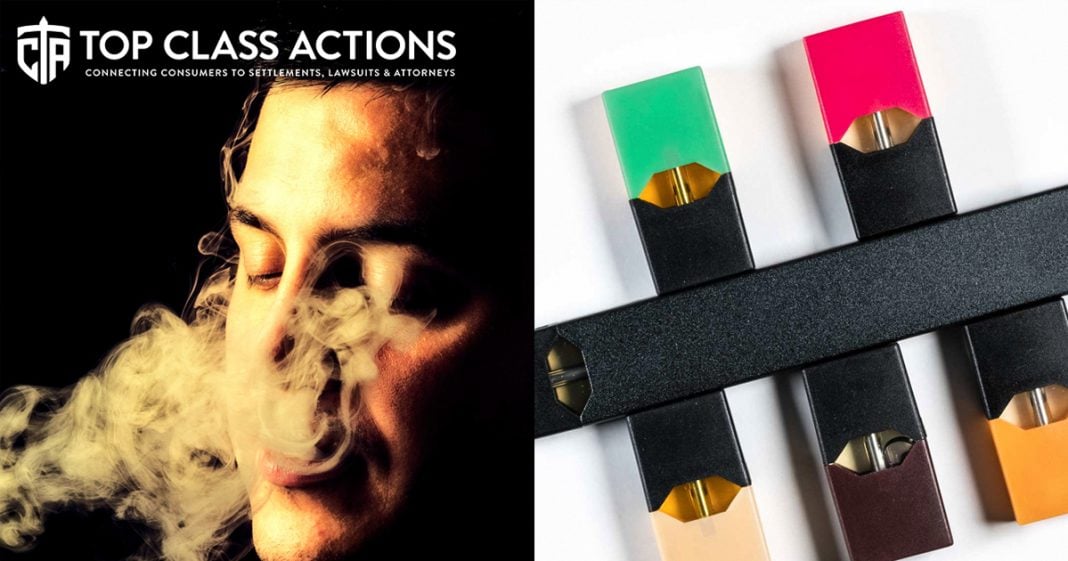 According to the FDA, there have been 35 reported cases of seizures where e-cigarettes were a factor between 2010 and the beginning of 2019. The FDA notes that seizures and convulsions are known to be potential side effects of nicotine poisoning. The federal agency says that seizures and concussions “have been reported in scientific literature in relation to intentional or accidental swallowing of nicotine-containing e-liquids.” Ring of Fire’s Farron Cousins discusses this with Scott Hardy, President of Top Class Actions.

Farron Cousins:                  As e-cigarettes become more popular here in the United States and as they’ve now been on the market for a little over 10 years, we’re finally starting to get some scientific studies back showing that these things are not as safe as originally thought. Joining me now to talk about what’s happening is Scott Hardy with Top Class Actions and Scott, based on my little intro right there, I can promise you the angry comments have already started on our channel here, but we have to be real and we have to be honest and we are seeing a lot of very troubling scientific peer reviewed information coming out about the dangers of e-cigarettes. Tell us what’s going on.

Scott Hardy:                          Sure. So right now, you know, it’s, it’s been well publicized how dangerous vaping is even though people seem to think that they’re just inhaling air. And because of that, we have three separate groups of litigation going on right now. We have one group that are representing underage minors or their, that got addicted to nicotine because they were using JUUL products and vaping. We have another group that are now suing JUUL because they’re suffering lung, pulmonary, and cardiovascular problems where they are having major problems. You have people go into the hospital for collapsed lungs because they’re vaping. And then three, you have another group that are representing those who suffer a nicotine overdose and are having seizures because they’re vaping so much nicotine into their system. They think it’s safe, oh no, and one little JUUL pod, as you and I discussed before, you’ve got an entire pack of cigarettes.

So if you suck through that, then you can, you know, your, your brain and your body has a hard time processing it. And as you touched on, it’s become such an issue with young people who just still don’t think it’s a problem. You know, and some of our articles that we have linked, we have some studies that show what middle schoolers and what high schoolers think they’re actually vaping. The majority, even in high school, think they’re, they’re vaping just flavoring. Then a small majority say, oh yeah, we, we actually know that we’re, we’re vaping nicotine, big deal. But when you go into the eighth graders, they actually, only less than 15% of them think that they’re actually vaping nicotine. So you have a lot of kids that are getting hooked on these products and are suffering consequences, severe consequences.

Farron Cousins:                  And what’s really interesting about this as well is that when we we’re talking about some of these issues that we’re seeing, especially the, the, the heart problems, the high blood pressure, the lung issues, those are happening in people using the nicotine pods and people using the non nicotine pods. So if anyone is out there saying, well I’m, I have nothing to worry about, I’m not using the nicotine, I’m not getting that, you know, really addictive, dangerous stimulant. Well guess what, the peer reviewed science is still out there saying you’re still at a greater risk of a heart attack, you’re at a greater risk of a pulmonary problems than somebody who does not smoke or vape.

Now let’s be totally clear here too. I do believe at this point, obviously that vaping would be safer than, than smoking a traditional cigarette. There’s hundreds upon hundreds of deadly chemicals in an actual cigarette. But we have to be very careful and I think the people who get angry about this and make these comments saying we’re in the pocket of big tobacco, they need to understand that they have to stop making the claim that these things are harmless.

Peer reviewed scientific articles have proven it wrong and to deny that is to deny science itself. That is not okay. That is not something we endorse here. And of course, you know, I happen to work for Mike Papantonio, the guy that basically helped spearhead those lawsuits against big tobacco. To, so to assume or to insinuate in any way that we’re in their pocket, is pretty ridiculous here. But again…

Farron Cousins:                  Well, and I think a lot of the issue too is, you know, we see, we see these headlines come out. We’ve seen so many illnesses, mystery illnesses they’re still calling them, just in the last few weeks from vaping. But a lot of that has to do with the fact that we’re still not even regulating this in any kind of meaningful way. There are no standards, there are no standards right now as to what can or cannot go into vape juice. They don’t exist. I have been through the FDA’s website. I have gone through every single page trying to find anything where it says what can or cannot go in there.

Scott Hardy:                          Yeah, and it’s finally catching up. You know, it’s sad that we can see some, some kids die from vaping related illnesses and now we’re, you know, the Trump administration gets involved and is trying to shut down some of the flavorings and that kind of thing. You know, a lot of kids die from gun violence, but we can’t do anything about that, I guess. But hey, we can get in charge, get involved with vaping, and definitely stop that right in it’s tracks. We’ll see.

Farron Cousins:                  You know, everybody please follow the links in the description of this video. There’s links to the scientific reports. There’s all kinds of information out there that is verifiable. Find out what’s really happening with these devices. Again, the links are in the description of this video, they take you to Top Class Actions, the JUUL pod page, the nicotine overdose page, it’s all right there. Please study up on this and understand that while it may be safer than traditional smoking, to call it safe is seriously not okay. Scott Hardy, Top Class Actions. Always appreciate your time.