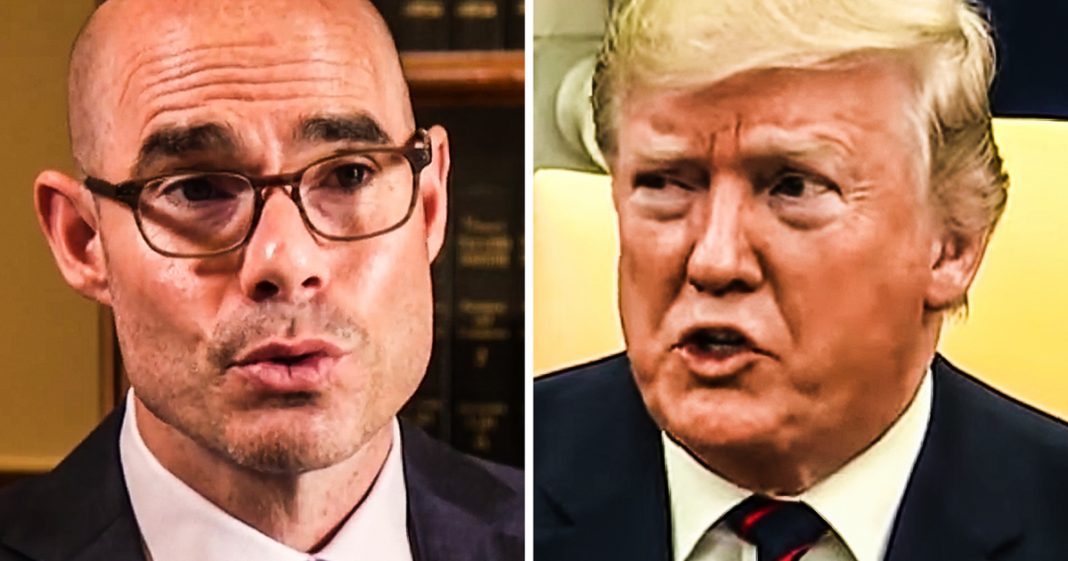 A Texas Republican lawmaker has been caught on tape admitting that Donald Trump is killing the Republican Party. This is one of the first confirmations that we’ve had of Republicans actually fretting about the President behind closed doors, but do they really understand what’s happening? It isn’t just Trump that has destroyed the GOP, as Ring of Fire’s Farron Cousins explains.

*This transcript was generated by a third-party transcription software company, so please excuse any typos.
In the state of Texas. The uh, speaker of the house of representatives, a Republican by the name of Dennis Bonnen has been in a lot of trouble recently for a lot of the things the president has been accused of doing, which is essentially uh having a quid pro quo with an outside group to take out certain Republicans in his state and he told them on tape, by the way, if you get rid of these Republicans, I will make sure that your people are installed in the next session. now that’s a big story. It’s been all over the news down there in Texas, but there’s a bigger thing that came out from these undercover recordings that happened with the Republican speaker of the Texas house of representatives and it was that this speaker Bonnen admitted something that we have only heard rumors about in recent months. And here’s what he had to say. I just think we’ve got to get through 2020 guarantee if we try and hold this majority, which with all due respect to Trump, who I love, by the way, he’s killing us in the urban suburban districts. If we can make this work, I’ll put your guys on the floor next session. He’s killing us in the urban suburban districts. I love the guy, but he’s killing us. Now, the reason this is the part of the story I want to focus on is because again, for months and months and months, we have seen reports. We have seen stories anonymous Republican’s saying behind closed doors. Off the record, man, Trump’s really bad for us. This isn’t good. Oh, if impeachment were held today, 30 of us would vote against him, but Oh, and we never really could believe those stories. Right? You know, that sounds like the kind of thing somebody could easily make up to make the president look bad. This is on tape. This is an actual audio recording of the Republican speaker of the Texas house of representatives saying this, admitting that Donald Trump is killing the party. but unfortunately for Bonnen here, he doesn’t get it. I love the guy, but he’s killing us. Trump’s not killing the Republican party folks. Trump is actually helping expose the Republican party and that’s what’s killing you. That’s why voters are turning against you guys. There’s always going to be a Republican base in this country, just like there’s always going to be a democratic base in this country, but everybody else, the kind of floats around, maybe I’m Republican, maybe I’m Democrat, I don’t even know. Believe it or not, there are people like that, which I still find odd. But nonetheless, there are people like that and they’re being turned away from the Republican party, not just by Donald Trump, but by the overall corruption of the Republican party. And I’m not saying every Republicans out there committing crimes, but you’re damn sure are all out there defending the guy that is, and that’s not okay. You’re also though, and this is probably even the bigger issue, you’re enacting policies that haven’t benefited anyone below the upper class since 1980 that that’s also going to take a toll on it, and that’s what the Republicans don’t get. It’s not just Donald Trump. Hell, it’s not even mostly Donald Trump. It’s the fact that your party has done nothing to benefit an average American citizen since before the 1980s you fix that problem. Then maybe maybe your party won’t die off into obscurity, but if you continue to think that your problem is one guy sitting in the white house, then good luck rebuilding when he’s gone.