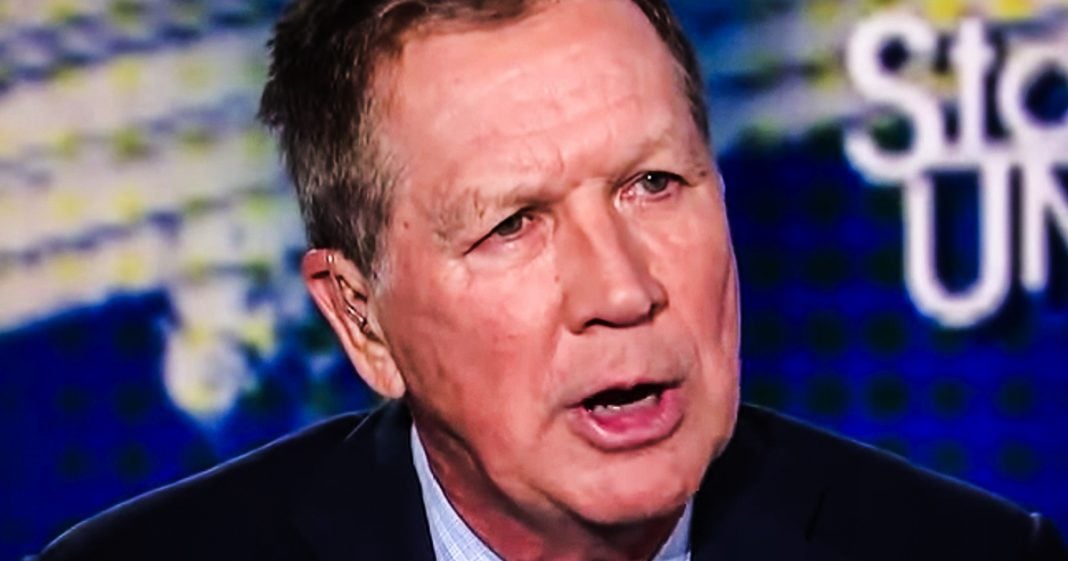 Governor John Kasich didn’t mince words during a recent interview on CNN when he told Republicans that they needed to look at themselves in the mirror and decide if this is how they want to be remembered. He’s referring, of course, to their defense of Trump, and Kasich seems to believe that Trump is the only stain on the GOP’s legacy. Ring of Fire’s Farron Cousins explains why Kasich couldn’t be more wrong.

*This transcript was generated by a third-party transcription software company, so please excuse any typos.
This past weekend, former Ohio governor John Casick went on CNN to speak with Jake Tapper about the impeachment proceedings and about Republicans in general because obviously Republicans have done a very good job of being loyal to Donald Trump. They haven’t been very good in their defense of Donald Trump, but they’re being very good at being loyal to Donald Trump and John Casick, a Republican through and through issued this warning to the Republicans. He said, look in the mirror and figure out how you want to be remembered later and how you feel about yourself today. There’s nothing wrong with telling the truth and sharing your real feelings. I don’t understand why they don’t do that, Casick said, look in the mirror. figure out what’s going on. Is this what you want to be Republicans? That’s great advice from John Casick, isn’t it? Good job, John. Good, good, good job. Here’s the problem I have with that. Trump’s not your problem, bro. Trump is not the problem with the Republican party. Trump is the end result of decades of problems with the Republican party. That’s the culmination, not the cause. Everything that happened in the decades prior to today is what led to Trump and John Casick and other Republicans out there don’t seem to understand that. John, what kind of legacy do you want the Republican party to have? You want them to turn on Donald Trump and then say, Hey, now we go back to being the party that thinks women shouldn’t have the right to choose what to do with their own bodies. Let’s be the party that continues to cut environmental regulations and allow corporations to give 10,000 people in the Ohio river Valley cancer. Or how about the fact that, uh, we just decided that we don’t want to believe in science and so we let people in coastal, uh, cities drown because we’re pretending science doesn’t exist. How about we be the party that cuts regulations that allow something like the BP oil spill to happen in the Gulf of Mexico or be the party that reduces oversight for workplaces so that maybe your workplace explodes and you die and your kids don’t have a father anymore. But that’s the legacy that John Casick wants the Republicans to give back to because that’s what it has been. And Trump didn’t change any of that. He didn’t even accelerate any of that. He just continued all of that. And that’s what drives me crazy about the Republican party today, is that you do have some of these never Trumpers. You’ve got your John Casick out there, and Mitt Romney, I think is flipping, depending on what time of day it is, acting like that man in the white house is all, is the root of all their problems. Trump isn’t the root of any problems in the Republican party. He may perfectly represent all of the problems with the Republican party, but I can promise he didn’t start a single one of them. Those problems have been there for decades, but as Casick points out that that’s the legacy that Republicans want to go back to.