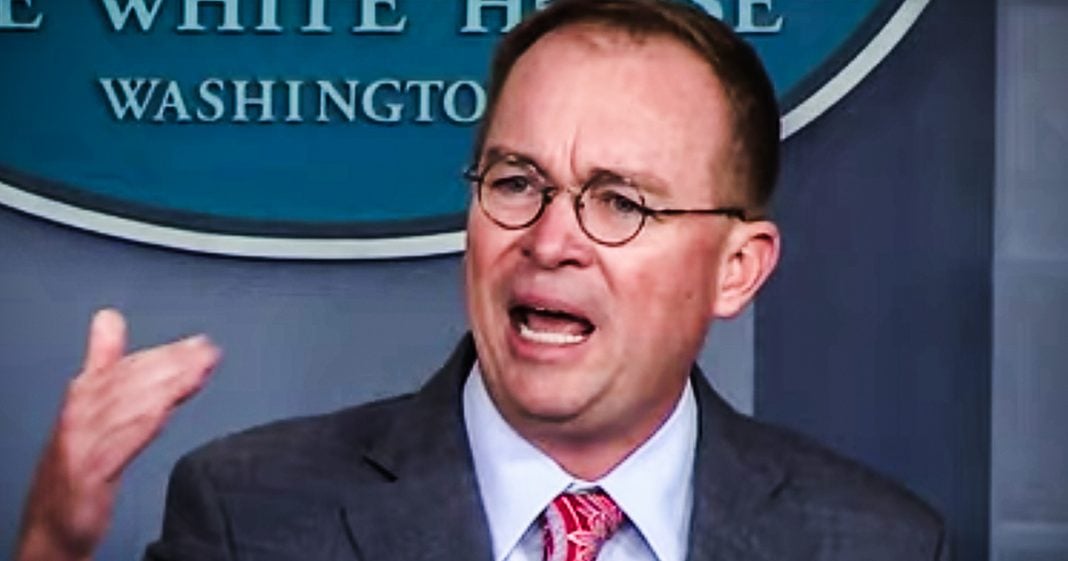 Mick Mulvaney, Donald Trump’s Chief of Staff, accidentally admitted that the President had a quid pro quo with Ukraine. Mulvaney claimed that information about the DNC server was sought by the administration and that the reason they withheld the military aide for the country was because they wanted this info first. He later tried to walk back his comments, but the damage was already done. Ring of Fire’s Farron Cousins discusses this.

*This transcript was generated by a third-party transcription software company, so please excuse any typos.
Yesterday, Donald Trump’s chief of staff, Mick Mulvaney dropped a bombshell in front of reporters where he admitted that yes, there was in fact a quid pro quo with Ukraine. Here it is.
So that was, those were the driving factors that he also mentioned to me in the past. The, the, the, the corruption it related to the DNC server. Absolutely. No question about that. But that’s it. And that’s why we held up the money. Now there was a report, the demand for an investigation into the Democrats was part of the reason that he was on the, to withhold funding to print the, the look back to what happened in 2016 certainly was, was part of the thing that he was worried about in corruption with that nation and that is absolutely appropriate. Yeah.
So that seems pretty cut and dry, right? Mick Mulvaney said yes, we wanted information about the DNC server and that is the reason we withheld the aid that Congress had passed for Ukraine. I mean that, that’s kind of the end of the story, right? We were looking for the quid pro quo. Mick Mulvaney came out and said, here it is folks. But then of course later on in the day, Mick Mulvaney had to come out and say, Oh, whoops. Didn’t mean to say that folks, and I assure you there was absolutely no quid pro quo whatsoever between president Trump and president Zelinsky of the Ukraine. None at all. Quid pro quo does not exist. Then later in the evening, Sean Hannity even came out and said that Mick Mulvaney was stupid for even making that first statement in the first place and Sean Hannity for the first time in his life is absolutely correct. Mick Mulvaney is not a smart human being. Mick Mulvaney just gave up the farm because as I’ve repeatedly said, every one in this criminal enterprise is grossly incompetent and yet somehow they’re all still there. We have not been able to get these people out of office or throw them in jail or hell even get them to comply with a subpoena. They’re somehow still winning right now folks, and that is the part that truly blows my mind. Mick Mulvaney went in front of reporters. You saw the clip just a moment ago and he admitted to the thing that the Trump administration has spent the last few weeks swearing up and down didn’t actually exist. Well, it does exist. It just may not have been about Hunter Biden, but it was about something that did involve Democrats and Donald Trump wanting to dig up dirt on them. This is going to get crazier. This is going to get more frustrating, and we’re going to see even more levels of incompetence from the Trump administration. But the bottom line is this. We’re dealing with a bunch of idiots, a bunch of idiots who thus far have managed to win quite a bit, but I think given their increasing and competence that their days of winning may be coming to an end very soon.