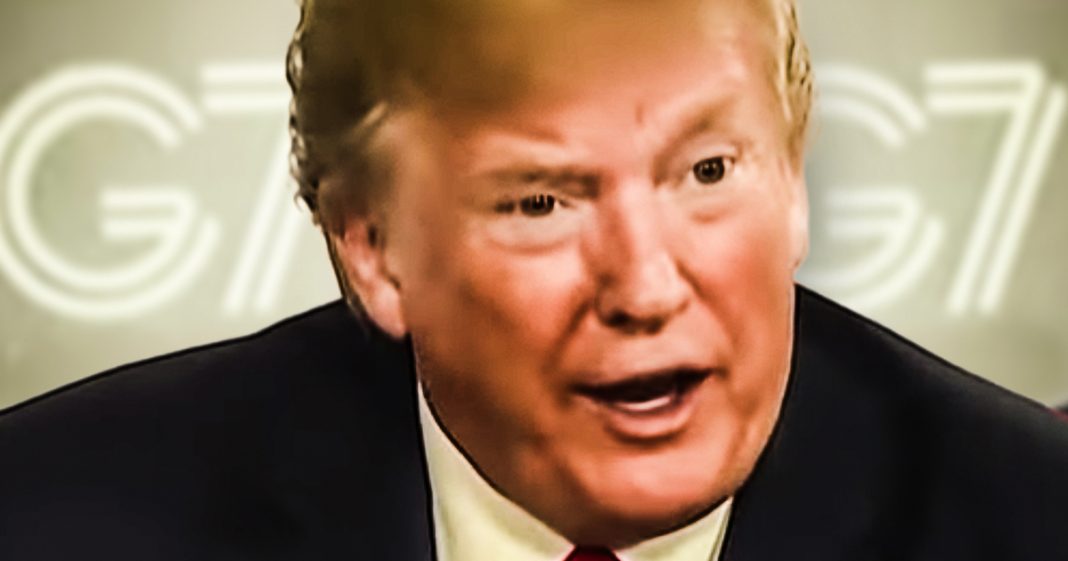 Donald Trump’s chief of staff announced that next year’s G7 summit will take place at Trump National in Doral, one of Trump’s failing Florida golf clubs. This is an open violation of the Emoluments Clause, and at this point it almost seems like the President is TRYING to get impeached. Ring of Fire’s Farron Cousins explains what’s happening.

*This transcript was generated by a third-party transcription software company, so please excuse any typos.
So Trump’s chief of staff, Mick Mulvaney, made a lot of, uh, announcements yesterday, some more illegal than others, but one of the announcements he made that really kind of set everybody off, not just admitting to the quid pro quo, was the fact that next year’s G seven summit is going to be held at Trump national Doral in Miami. So Donald Trump made good on his threat earlier this summer to hold the next G seven summit at one of his failing properties here in the United States. This is a violation of the emoluments clause if we’ve ever seen one. And that’s exactly what the president is doing here. And at this point, he is openly mocking the emoluments clause of the United States constitution because he knows that he can likely get away with it, but he doesn’t care. He wants to show everybody that he is bigger and better and better than the law. Nobody should be okay with this. I don’t care if you’re a die hard MAGA hat, Trump flag waving supporter. You should not be OK with this. Trump Dorau down there in Miami has suffered a 69% operating loss since Donald Trump announced that he was even going to run for president, and the company itself says that the reason they’re losing so much is because of the stigma that comes along with Donald Trump. Him being out there in the public being president has hurt that particular business. People don’t want to come because they don’t like Donald Trump. So Trump is trying to boost this failing resort. He’s going to bring in world leaders and they’re going to bring in all their staff and all their security, and they’re going to rent rooms. They’re going to eat three meals a day. They’re going to have some fun out there paying for recreational activities in all of that money, including the U S secret service, Donald Trump’s stay, all of Trump’s staff, all of that money is going to go back into Donald Trump’s pocket, and that’s a violation of the emoluments clause. This is a very simple issue, folks. This is not okay. This is unconstitutional. There are plenty of places here in the United States where this summit could be held that are not owned by Donald Trump. He is doing this because he has no respect for the rule of law. He has no respect for the American public and because he wants to make more money. That is why this man ran for president. That is what he’s been doing since day one in office and that’s what he’s doing with this G seven summit. The Democrats in Congress have to do something about this. I know we’ve got a couple of emoluments clause lawsuits out there. Most of them filed by outside organizations like citizens for responsibility and ethics in Washington. They’re doing a bang up job on this, but the Democrats in Congress need to roll this into the impeachment inquiry or at the very least, the impeachment articles that will eventually be drafted. This is a clear cut violation of the United States constitution and to act like it’s no big deal is to insult the constitution itself.