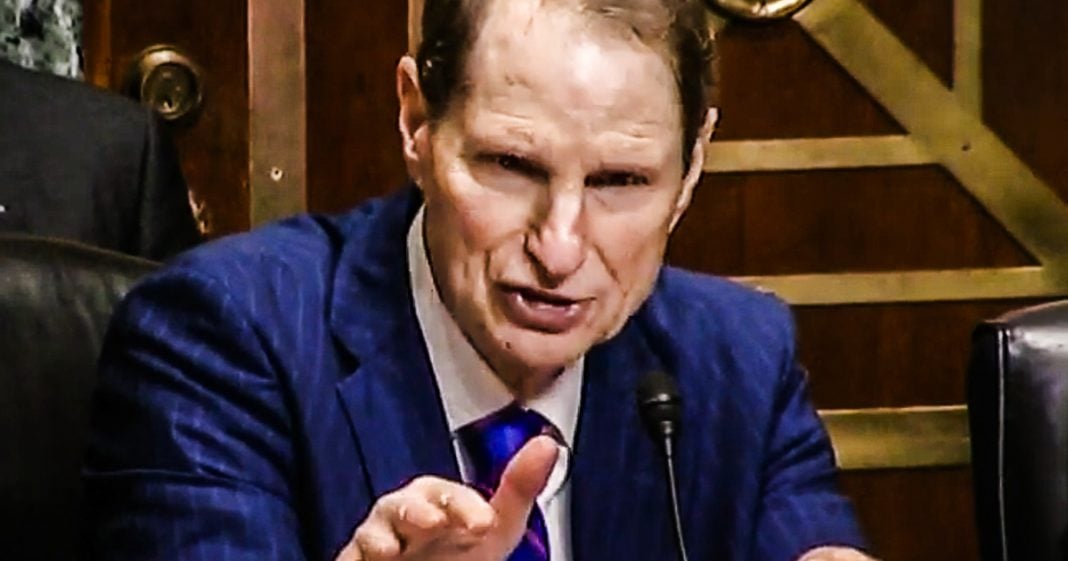 Online privacy has emerged as a major issue in recent years, with nearly every major tech and social media giant selling your data without you even knowing it. But under a new bill by Democratic Senator Ron Wyden, these tech giants would go to jail for deceiving the public and selling their data without their consent. Ring of Fire’s Farron Cousins discusses this legislation and what it could mean for the future of privacy.

*This transcript was generated by a third-party transcription software company, so please excuse any typos.
Democratic Senator Ron Wyden is taking your online privacy rights very seriously and Wyden has drafted new legislation called the mind your business act that is directed towards tech giants here in the United States and here is what that much needed legislation would do. Basically it says that any tech company here in the United States or, anytime a person goes online, they have to consent to the company to whatever website or you know, tech giant it is that they’re okay with their data being collected by that company and then sold to other people and companies. If they do not approve this, you, according to this legislation, cannot take their data and do anything with it. You can’t take it at all. It’s not yours. Basically this legislation gives consumers their rights back rights that have been trampled because as it is right now, really not a ton of regulations protecting us when we go online, but that’s not the only part. That’s not the only good thing about this legislation. Wyden wants to not just give consumers control of their privacy back, but he wants to punish the CEOs of these companies, which would include Mark Zuckerberg when they lie about collecting our data, when they sell our data without our permission, and when they sell it to people who we did not approve them to sell it to, he wants to throw them in jail. He wants to fine them heavily, but more importantly, again, he wants to throw them in jail and that’s what has to happen as Wyden specifically said, people like Mark Zuckerberg have to face consequences or else they won’t change their actions. And that really gets to the heart of not just the tech giants, but all of corporate America until they face consequences, personal consequences for their actions, they’re going to keep doing it. We have seen it with drug companies, insurance companies, oil companies, chem and chemical companies, and now tech companies, wall street banks, probably the worst of the worst, but all we ever do is fine them. They pay a little bit of money. That’s usually far less than what they scammed out of consumers to begin with. And then they just go right back to their illegal activity. You have to put ’em in jail. There has to be a consequence for those at the top because if there is not, they will not stop. Ron Wyden is 100% correct about that. People have to go to jail. That’s why jails there. That’s why it exists, not just as a punishment, but also as a deterrent. And for far too long, CEOs and executives here in the United States have avoided seeing the inside of a prison. So even when they knowingly and willfully break the law, instead they shell out a couple million, sometimes a couple billion dollars from their company. They write off most of that in taxes and they go about their day. It’s a lot harder to write checks when you’re sitting behind bars. Ron Wyden understands that and he wants tech giants to understand that that could be their future.