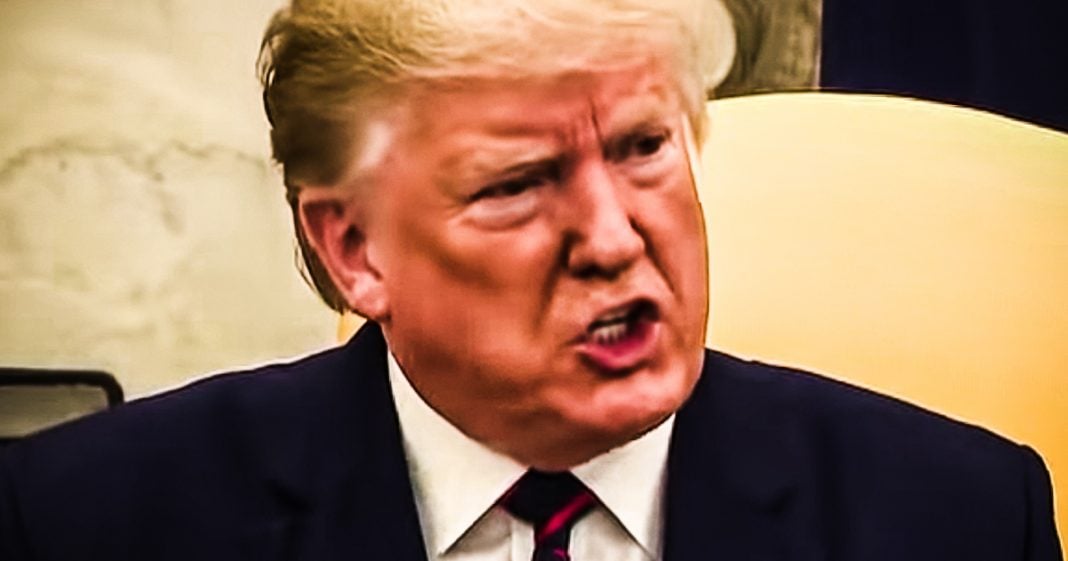 According to a bombshell new story from ProPublica, Donald Trump very likely committed both bank and tax fraud by under-reporting his finances on his taxes and over-reporting his earnings when applying for loans. This is very clear cut fraud, and ProPublica has the documents to back this up. Ring of Fire’s Farron Cousins explains what’s happening.

*This transcript was generated by a third-party transcription software company, so please excuse any typos.
Earlier this week, pro Publica got their hands on some of Donald Trump’s business, a tax documents from the state and city of New York. And what they found in this bombshell report that they have put out is that it really looks like the president committed both tax fraud and bank fraud. And here is what those documents from the Trump organization itself tell us. They tell us that on at least four different properties in New York city, the president under reported occupancy to the tax authorities buddy over reported occupancy of those buildings to the banks that he was trying to get money from. That ladies and gentlemen is fraud. That is tax fraud and that is bank fraud. That is what this organization led by Donald Trump was very obviously engaged in. Now, ProPublica did speak to some real estate lawyers who said, yes, there are plenty of circumstances where somebody would under-report occupancy to the IRS and over reported to banks, and that’s not even necessarily illegal depending on the circumstances, but according to ProPublica, they couldn’t find any of those specific legal circumstances in these numbers, and the numbers were so wildly different in what they reported to tax authorities versus what they reported to banks, that it’s pretty obvious that this was intentional and not some kind of error. So here’s what, what matters here. Here’s what this is about. Donald Trump and these four buildings in New York, he would go to the banks and say, yes, I’ve got 90% occupancy in this building. Things are selling like hotcakes. People want them, just give me some money, loan me some money so I can do more great things. We’ll sell the remaining 10% everybody wins. The bank says, wow, these numbers look great. Yeah, sure, absolutely you qualify for this loan. Then he goes and he tells the tax authorities in the state, the property tax authorities and he says, listen, I’ve only got 70% occupancy in this building. So 30% of it is not being used. That goes to waste. I get to write all that off. You know, my poor me, I can’t, I can’t sell anything in this building. Everything’s awful there. And the tax authority say, Oh wow, this is poor you. Yes you can. You can write all these things often. Sorry, hope you start selling more bud. Best of luck to you. That’s fraud. That is fraud and that is pretty much the hallmark of Donald Trump’s entire career. But this is a big story and this is a big story that not enough people are paying attention to. You know, the entire time the president has been president and we’ve had all of these different investigations happening. The one thing we have always come back to here is saying, we’ve got to look at the financial records. We got to look at the tax returns, and we’ve got to pay a little bit more attention to what’s happening in the state of New York, because if you want to pop Trump on a crime, that’s pretty easy to prove. Go to the banks. That’s where Trump seems to be committing most of his, at least according to his former lawyer and fixer, Michael Cohen, who did testify before Congress, that Donald Trump was doing this exact thing. That’s a big deal. That’s bad news for the president of the United States. But luckily these prosecutors and investigators up there in the state of New York are not hindered by Congress and rules and procedures that they have to go through that make it a little cumbersome to conduct an investigation. In New York it’s just straight through, and that is exactly what they’re doing so that they can uncover more of this and hopefully eventually, finally hold the president accountable for his actions.