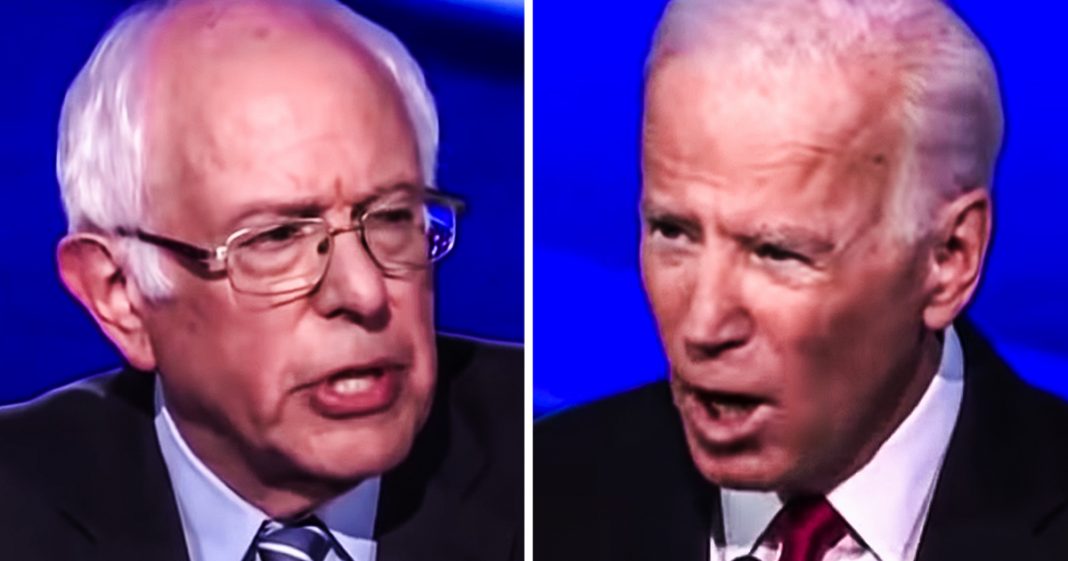 During an impromptu gathering with reporters on Wednesday, Joe Biden took a cheap shot at Bernie Sanders and Elizabeth Warren, claiming that the pair are trying to con the American public with their Medicare For All plans. This is absolutely false, and it is Biden who is working on misleading the public into thinking this plan won’t work. Ring of Fire’s Farron Cousins discusses this.

*This transcript was generated by a third-party transcription software company, so please excuse any typos.
So yesterday, the day after the fourth democratic presidential debate, Joe Biden was once again back on the campaign trail and then a little impromptu gaggle of reporters. He decided it was time to take the gloves off and take some shots at both Bernie Sanders and Elizabeth Warren and specifically Joe Biden wanted to tell reporters that Elizabeth Warren and Bernie Sanders were attempting to con the American public. They were conning the American public with their Medicare for all proposal that Biden’s swears up and down is not only unaffordable, but those two Democrats clearly have no plan whatsoever how to pay for it. I’m gonna read a couple select quotes from the former vice president here. It’s fascinating that the person who has a plan for everything has no plan for the single most consequential issue in this election, in the minds of the American people across the board. Credibility matters. It matters. The question that I think that Senator Warren is going to have to face, she’s going to have to tell the truth or the question will be raised about whether or not she’s going to be candid and honest with the American people. I mean, look, I don’t want to pick on Elizabeth Warren, but this is ridiculous. The idea that someone is going to be able to go out and spend what turns out to be, if you add on everything that’s going to be free beyond Obamacare, excuse me, beyond Medicare for all, which it’s going to come out to about three point $4 trillion a year. That’s bigger than the entire federal budget, every single thing. And on top of that, a wealth tax, well, the wealth tax, once you get to 27 trillion over time, whatever the number is, it doesn’t even get close to paying for any of this. And God loved Bernie and it was really good. I really mean it. To see him so healthy and moving last night, I really mean that and he’s been through hell. By the way, you know his daughter in law died of cancer like my son. I mean this guy has been through hell. I was glad to see him. I really mean it. But Bernie, Bernie doesn’t pay for half his plan. Everything Joe Biden has said, here is a lie. It is an absolute lie. You want to talk about somebody conning the American public, Joe, it’s you. You’re the one trying to calm them into thinking that this plan that most other industrialized countries have had for decades and it seems to be working just fine. That plan that everybody else can pull off. We can’t pull off here in the United States. That’s what Joe Biden is saying right there. Now I don’t know about you, but I don’t want to vote for somebody. I don’t want to support somebody who just goes out there and tells us all the things we can’t do. All the good things that everybody else has that we can’t have. You know, allegedly we’ve got the biggest economy on the planet, one of the biggest, it’s robust and we can’t afford this thing. Well, here’s the fact that Joe Biden and everyone in the medical industry that’s helping craft these talking points for him. Here’s what they don’t understand. We’re already paying those costs, folks. We’re already paying those costs and that’s what these morons don’t seem to understand. Either that or they don’t want you to understand it because they think you’re a moron in your not going to go and do the homework on it. I have, I’ve literally sat down, done the math as have many other much more talented people and every one of them has come up with the same result. This plan pays for itself. This plan ultimately saves us money. This plan puts more money in the us economy. This plan saves 90% of people in this country money off every paycheck. 90% of us are going to save money under this plan and yes, that’s going to pay for itself because we are essentially paying the premiums with the increase in taxes. But that increase in taxes is far less than the health insurance premiums we pay now. So what is a net gain for all of us? That is how Bernie Sanders and Elizabeth Warren need to frame it and Bernie does a great job of that. Elizabeth Warren in the debate the other night did not. That was her biggest failing of the evening, and Bernie kind of had to swoop in and explain it because she was kind of dancing around the issue. Didn’t want to be forthright with everybody, but Joe Biden’s lying. Joe Biden is absolutely 100% lying to the American public here. Bernie and Elizabeth Warren are not trying to hide anything about this. Sometimes they may not be the best at articulating it, but luckily the articulation of it is readily available to anyone who has five seconds to spend on the internet. I suggest Joe Biden get somebody a little bit younger than him to explain how the internet works so he can read all of these reports for himself.