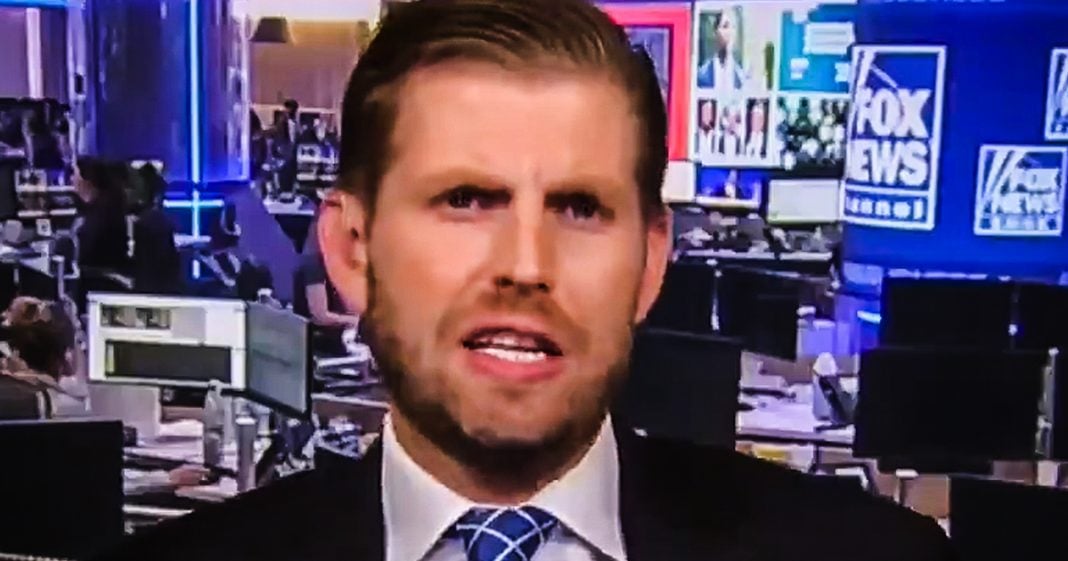 Eric Trump is trying to defend the fact that his father is profiting greatly off the presidency while simultaneously claiming that his father is losing money on the president. It takes a special kind of stupid to believe that both things are true, but that’s what we get with the Trump kids. The truth is that Eric and his brother Donald, Jr. are both running interference for their father, and the whole family is cashing in on this administration. Ring of Fire’s Farron Cousins discusses this.

*This transcript was generated by a third-party transcription software company, so please excuse any typos.
If you ask Eric Trump if emoluments are a bad thing, he’s going to tell, you no. And we know that because he actually defended it recently on Fox news. Here’s a clip of Eric Trump, and it’s a very weird clip, but to give you a little context, uh, before this part of the clip starts, he had gone on and argued that he is getting a subpoena every other hour because somebody went in and bought a drink at a Trump hotel. Oh my God. You know, he can’t even function because of all the subpoenas, because of all these alleged emoluments, which he says are perfectly fine because his daddy owned those hotels before he became the president. Then it went into Hunter Biden a little bit, and then it got into this.
and somebody went into one of their hotels that they built 10 years ago when they bought a martini at the borrower and no one knew who they were. And that’s gotta be in an emolument. And then you’ll have Elijah Cummings every single night. Send us, you know, subpoenas about how many martinis were purchased at a bar in a hotel that we owned long before my father even started running. I mean, it’s insanity. You’ve got the video was a view, but that’s beside the point. Irresponse he’s not doing very well there. Um, in fact, we had a lot of supporters in Minneapolis, so it was pretty good. You know, the difference between us and Hunter is when my father became commander in chief of this country, we got out of all international business, right? When his father became vice president of the United States, he got into international business. That’s the difference. I don’t think there will ever be a Laura, a president who has sacrificed so much of his wealth, had made so many personal sacrifices as my father, my father got into politics to drain the swamp, to stop this nonsense from happening exactly what you see here. Because this rampant, he made so many sacrifices, including putting a ton of his own money into it and including losing an actual, an absolute fortune because of it. All these guys are cashing in on it. They’re taking board positions, are cashing in on their father. I mean, you see me on any board.
Well, to answer your last question there, Eric, do we see you on any boards? Um, yeah. You’re, you’re running the Trump organization. You’re on that board. Idiot. You were on the board of a charity that the Trump organization ran, but you got kicked off of that for doing illegal things. So I know you’re not on that board anymore, but you’re still on the board of the Trump organization. And it’s funny, again, he started this whole segment with her by talking about how easy these emoluments are to accidentally get in that they’re harmless and then goes on to say that they’re also not happening because his dad’s losing so much money. Your dad’s not losing so much money. I mean, he has lost a little bit because of the stigma that the Trump name now has and people don’t want to go to his resorts. But you know where he’s pulling in a lot of money from the federal government itself, from the Republican party itself, from foreign, who know that all they have to do is book a block of rooms at a Trump hotel and suddenly the president’s going to favor them. In fact, reports have shown that foreign dignitaries, foreign countries are actually booking huge blocks of rooms that Trump’s hotels paying for them and then never showing up to actually use them. They are using the president’s businesses to bribe him because they know he will do them favors if they spend money at his hotels. Eric Trump knows that. Eric knows that he’s not losing billions of dollars because what he’s losing in foot traffic from average Americans, he’s more than making up for it with the money that the president is spending from the taxpayers. Every time he goes and plays golf or every time he holds a meeting at Mar-a-Lago. That’s what’s happening here, and Eric Trump knows it because Eric Trump gets to see the books, but he doesn’t want the public to understand that. He wants to think that it’s, Oh, anytime somebody spends a dollar at a vending machine at a Trump hotel, he gets a subpoena. But that’s not how it works. And yeah. Fantastic. The president owned these businesses before he became president. Jimmy Carter owned a peanut farm before he became president. Do you know what they made them do? Our loyal viewers know what they made him do, because I say it all the time. They made him sell his peanut farm. Trump shouldn’t have any financial interest in any business in this country whatsoever, or any country at all. That’s the way it is. He should’ve had to not just divest, sell off every interest he has so that when he stopped being president, he doesn’t just revert back to getting that money again. Those days are over. And that’s the sacrifice that people have to make if they want to be the president of the United States. Eric Trump’s on Fox news talking about all these sacrifices his father’s made. You haven’t sacrificed anything and neither is your father. You’re taking our money now, our tax dollars. You’re taking it away from schools, from fire departments. Police departments from infrastructure and you’re putting it in your own pocket. You sacrifice nothing, and that’s exactly what you knew would happen when daddy became president.