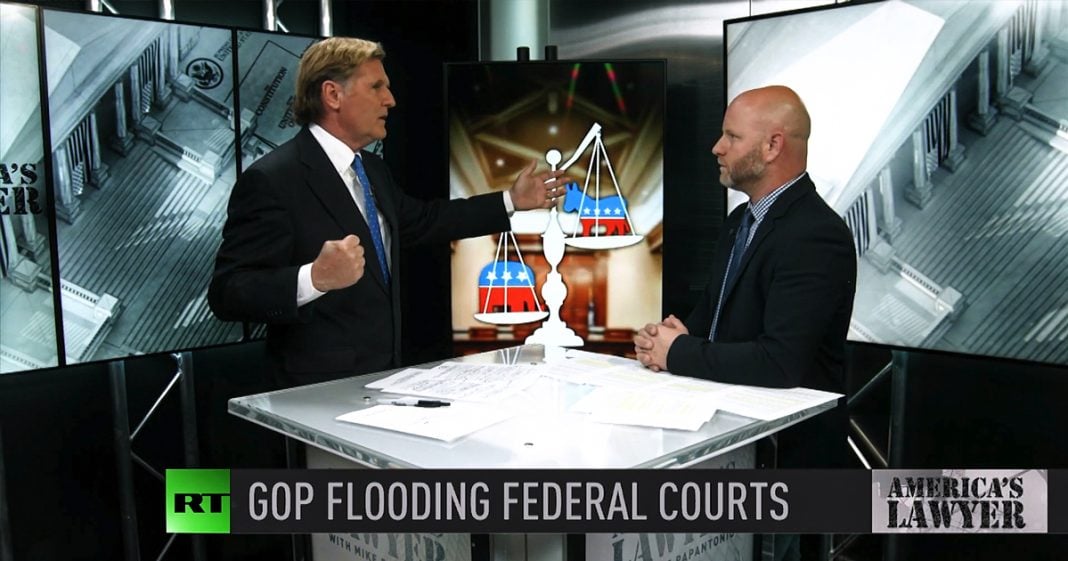 Via America’s Lawyer: Mike Papantonio and Trial Lawyer Magazine editor Farron Cousins discuss how federal courts have been flooded by Republicans under Trump’s presidency, filling over one hundred vacancies left by Obama. Nearly a quarter of the Federal Appeals Court is now comprised of Trump appointees, stoking fears that these packed courts may veer from general interpretations of the law.

Mike Papantonio:             Barack Obama left office with more than a hundred vacancies on the federal courts and Donald Trump and the new Republicans in the Senate did not waste any time filling these seats. But who’s picking these judges and what do they have to gain from these appointments? Joining me to answer that question is Farron Cousins from the trial lawyer magazine. Farron, this, if you take a look at this case, at this situation, I think 15 years ago on Ring of Fire, we started talking about the idea that the Democrats were paying so much attention to social issues.

You know, is this judge, is this judge good on gender? Is the judge, is he good on civil rights? Is he good on social issues? And we ignored the fact that the people that were being appointed were the best friends of corporate America, giving them virtually everything. Trump has taken this to a whole new science, hasn’t he?

And so Mitch McConnell, through his friends over at the Federalist Society, have just been pumping these judges to Donald Trump saying, this is a good person. Here’s their qualifications. Here’s how they’re going to help business. Let’s go ahead and appoint them. McConnell says, look, I’m going to go back to the Senate. I’ve got all my folks here ready to vote. We’ll get them fast tracked. You’re good to go.

Mike Papantonio:             I don’t think they’re there, I really still don’t think they understand this. As a matter of fact, you’ve got Trump who’s made what, 45, 43, 45 appointments just to the appeals court. That’s not even talking about what he’s done at the trial level. It’s been a disaster for consumers, you know. What, what is your take?

Farron Cousins:                  Well, right now I think we’re at 25% of the total makeup of the appellate court is now Trump/Mitch McConnell appointees, who again are coming from these pro business groups. The Federalist Society is the one vetting these people and picking these people and they’re getting their money from the Koch brothers. They’re getting their money from all these right wing foundations that are funded by businesses, and that’s why, and to be honest, when we look back at some of the appointments Barack Obama put in there, as you said, yeah, they’re great on social issues. They’re going to be the best civil rights judges out there and they’re also going to rule with businesses 100% of the time.

Mike Papantonio:             I can tell you even the Obama appointee, the Clinton and Obama and, you know, yeah, there’s some great judges there. But if you look at, if you look at why we evaluate judges, we ought to start thinking about how are they doing on consumer issues. Not whether they rule on whether a male and female can use the same bathroom. I mean, I’m talking about kitchen table issues, dining table issues that affect whether your child can go to school, whether you’re going to have a job. These judges, whether they’re Democrat or they’re Republican, are horrible on on, on, on consumer kinds of issues.

Now let me, let me tell you something. Give me your idea of, of how this has shifted so dramatically. How have the Republicans taken this and they’ve, they’ve really made it work for them? I mean, how have they, how have they gotten here? What was the difference between what they did and what we saw with Obama?

Farron Cousins:                  Well, what the Republicans did was they obviously they had the perfect storm. You have the presidency and you have the Senate. House of Representatives doesn’t matter.

Farron Cousins:                  When it comes to the courts and because of that, Mitch McConnell said, listen, we’ve got a big majority, we’re going to change the blue slip rule, which means…

Farron Cousins:                  Right, the blue slip rule was where if the judge was from your state and you being the Senator from there said, no, I don’t like this judge. In the past, traditionally they would just say, okay, well it’s your state. We won’t pick this person.

Farron Cousins:                  Mitch McConnell said, nope, that doesn’t matter anymore and because of that, they can now fast track these people. They don’t have to get approval from both sides. They’ve got their big enough majority that everybody can get an up and down vote and go in.

Farron Cousins:                  And because of that, we have seen this fast tracking and it is because, as you said, Republicans know that the presidency is going to change hands all the time. Senate will, House will, these are lifetime appointments that will never change until that person retires, dies or gets impeached, which has only happened a handful of times in history.

Mike Papantonio:             Okay, quick reminder, Robert Bork, Scalia, they were the heart of the entire federalism movement. They were the people that came out with this nonsense called originalism.

Mike Papantonio:             Even though they like to say, yeah, this is a good idea. We don’t see the Republican’s following originalism at all, but, but here’s the point. They, they, there’s a guy that is Leonard Leo is a name that comes up a lot. Leonard Leo is the guy that controls the appointments through the Federalist Society. He controls virtually all the appointments we’re seeing with Trump and in here, and the truth is until we’re able to get the Democrats to understand the appointments matter even more than the Supreme court, even more than the presidency, I think we’re going to be in the same boat.