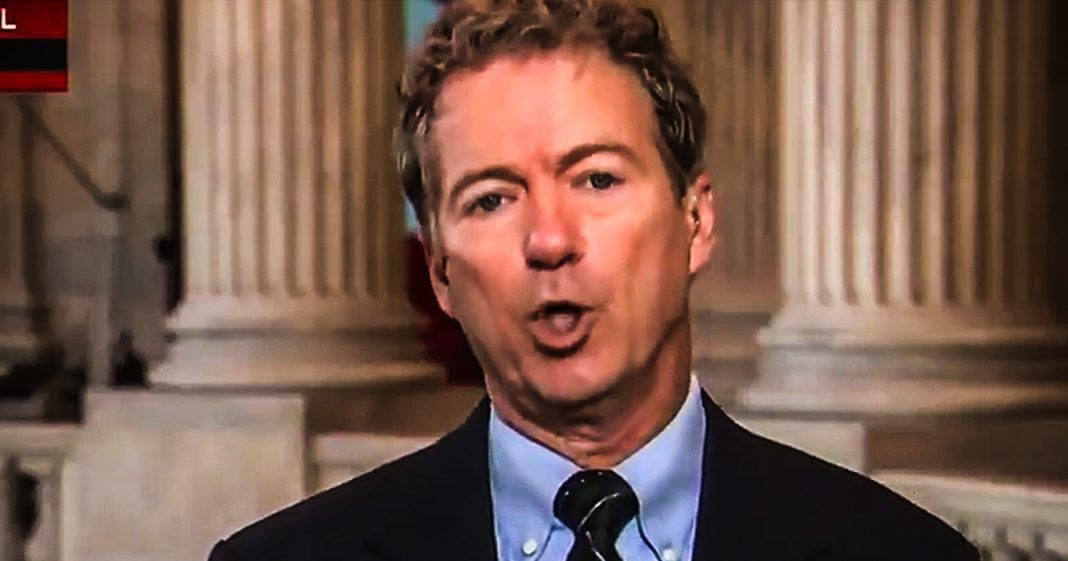 Republicans clearly never learned the lesson about people in glass houses, because they sure seem to be throwing a lot of stones at Hunter Biden while coddling and protecting Donald Trump’s kids. MSNBC’s Jennifer Ruhle was able to corner Rand Paul on the issue, and Paul was certainly not prepared to have to answer for the shady activity of Trump’s kids. Ring of Fire’s Farron Cousins discusses this.

*This transcript was generated by a third-party transcription software company, so please excuse any typos.
Republicans clearly never learned about people in glass houses, right? You know the old expression, people in glass houses shouldn’t throw stones. Well Republicans are living in one of the shakiest glass homes we have ever seen and all they want to do is throw rocks and that includes libertarian slash Republicans slash he doesn’t know what the hell he is. Rand Paul, who yesterday got confronted by MSNBC, Stephanie rule about corruption of political children. Here it is.
You should, if you want to be fair, investigate a Hunter Biden’s, uh, economic dealings in the Ukraine as well. Does that mean we should be looking deeper into how Jared Kushner’s family got farm money for 666 fifth Avenue, ho-, how Ivanka Trump got 13 trademarks from the Chinese government. How she was able to expand her brand since she, since the president took office. I mean, giddy up. Let’s do it. If we want to go down the road of the politics of self destruction of everybody criminalize all politicians on both sides of the aisle and go after their family, yes, we can do that. But both sides are doing that. Nobody really should excuse themselves and say, Oh, we’re holier than now and Trump is evil.
Now listen, as I have repeatedly said so far, Hunter Biden has not been accused of doing anything illegal at all, even back in the day, uh, with the Ukraine story. But if they want to investigate them, sure, whatever. But as Stephanie rule pointed out there uh Rand, you have to understand that Trump’s kids have been accused of crimes. Trump’s kids are currently being investigated. I mean, hell, they’re not even allowed to run a charity anymore in the state of New York because they were a bunch of frauds. And that case is actually still ongoing. That’s just what we know so far. but Rule was correct to point out all these other horrible things. Jared Cushner taking money from Qatar to pay off his, uh, buildings that were going under all the little secret meetings that Jared Cushner had along with Eric Prince with middle East leaders prior to the 2016 election. Maybe we need to start looking at those Rand. And then of course, Ivanka Trump being awarded trademarks from China the day after she sat and had dinner at Mar-a-Lago with the president of China. And we’re not just talking about, Oh yeah, it’s Ivanka brand. You know her, her wedding dresses and jewelry and shoes. Yeah, she got trademarks for those. But she also got trademarks for nursing homes, sausage casings and voting machines. why is Ivanka Trump making voting machines? I mean, why is Ivanka Trump making, that also does not sound appetizing. But why is Ivanka Trump making voting machines? Why does she have a trademark for Ivanka Trump brand voting machines. And could you imagine how much must you hate your parents or grandparents to send them to an Ivanka Trump nursing home? That is a death sentence if I’ve ever heard of one. But Rand, the point is we have very real corruption with the children of the man in the white house right now. And they weren’t just some far off group doing something overseas. Banking off of daddy’s name like Hunter Biden may or may not have done. No, no. Jared and Ivanka actually work in the white house. They, they work there. These are white house official government employees. You know, you guys talk about Hunter Biden had no experience and energy before getting this job. Oh, in Ivanka and Jared had experience with government affairs. They know about policy and regulations and laws. No. So if you want to investigate children have at it, just please understand that any investigation also has to include the corrupt little spawn of the president as well.