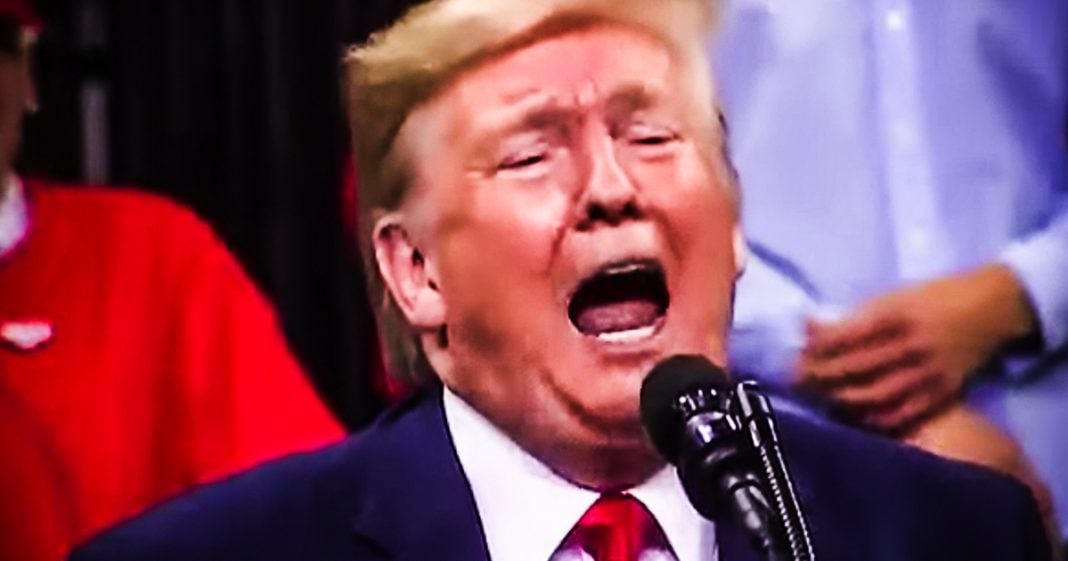 Just as we predicted last week, more and more whistleblowers are coming forward and reaching out to Congress to tell their horror stories from the Trump administration. While Congress still has to vet these stories to see if they match up to reality, the fact is that the floodgates have been opened, and what we’re seeing now is just the beginning. Ring of Fire’s Farron Cousins explains what’s happening.

*This transcript was generated by a third-party transcription software company, so please excuse any typos.
Well folks, if you remember last week when we talked about the second whistleblower that has now come forward, we predicted that this is going to basically start a little bit of an avalanche, a snowball effect of more and more whistleblowers coming forward and lo and behold, we get reports out this morning telling us that that is exactly what has happened according to a new report in the daily beast, two congressional staffers have confirmed that in the past two weeks, more and more whistleblowers have been coming forward to Congress to report on things that they saw or experienced from the president and his administration. Unfortunately, right now we do not know what any of those things are. We do not know how many more whistleblowers have come forward and we do not know if any of the stories, which again, we don’t even know the subject of, are accurate. That is what Congress is working on right now. They’re going through the proper channels. They are going through and vetting the stories from these whistleblowers, trying to corroborate them before they make any kind of move whatsoever, which is exactly what they’re supposed to do. You know, anybody could walk into Congress and be like, Hey, I worked for the president. I just heard him say that he was colluding. Okay, well you’ve got to have evidence. You’ve got to have something to back it up more than just your story. Otherwise, Congress would be like, Oh boy, we got them. But no, that’s not how it works and the only reason I even bring that up is because I already know the narrative that Republicans are going to say, Oh, it’s a deep state cue. Oh no, no, no, no, no. These are fake whistleblowers. They’re making things up. They hate Trump so much that they want him gone. Maybe some of these folks do. We’ll find out if we ever find out the whistleblower stories, but the point is the floodgates are open just as we predicted, and this is only going to start getting worse for the president because people see the writing on the wall. They know that things are looking bad for Donald Trump and they know that there is no relief in sight. His own personal lawyer is now under criminal investigation. Two of Giuliani’s good buddies who have been photographed and present for many other Republicans and Republican events, including our governor down here in Florida, Ron DeSantis, those guys are heading to jail and they ran a company called fraud guarantee and they paid Rudy Giuliani half a million dollars to work with them on the Ukraine. And all of the testimony that’s come out so far in the impeachment inquiry has been pretty damning for Donald Trump and his administration. And it seems that John Bolton is willing to flip on the president and those Giuliani associates I mentioned, they’ve said that they’re going to work with the Democrats who have subpoenaed them. So yeah, really not much to hold onto in that administration. And so we’re going to continue to see more and more people come forward through the appropriate channels. They know that their time now is limited. It’s, it’s not infinite. They’ve got to do something, they’ve got to save themselves, and they saved themselves by throwing the president under the bus. But Congress has to do this correctly. They can’t just rush forward. They can’t just come out and say, we just got new allegations of this, this, and this. Nope. Keep it quiet. Keep it simple and vet it thoroughly so that when you come out and make these announcements, there is no way they can be refuted. There are no gray areas. There’s no speculation, nothing but hard facts. And if Congress does that, and if they protect these whistleblowers the way that they are supposed to, then maybe just maybe we stand a shot at getting this guy out of office.