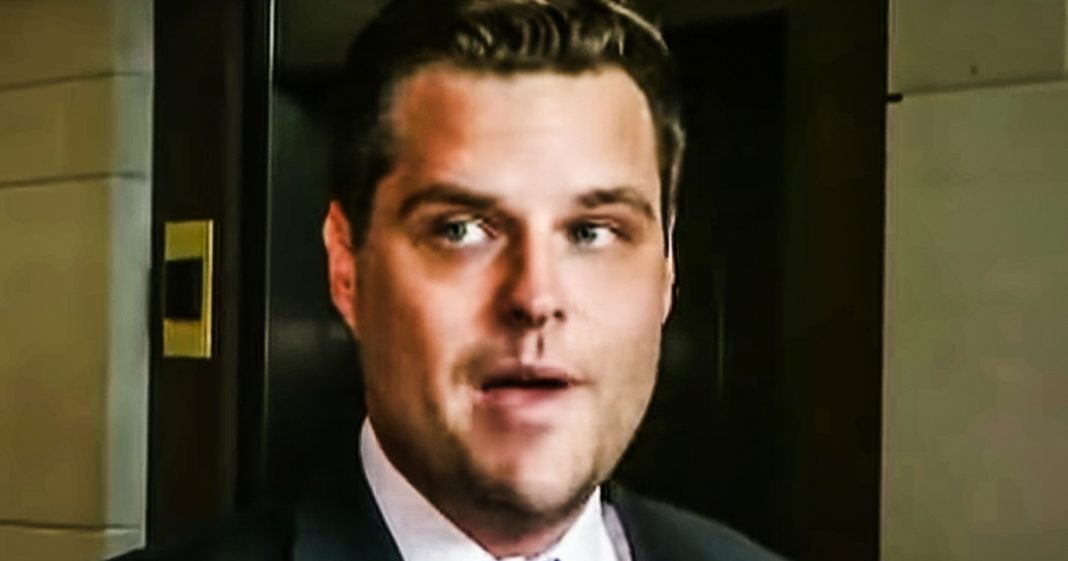 Republican Congressman and Trump sycophant Matt Gaetz got himself thrown out of an impeachment hearing yesterday, on the grounds that he didn’t sit on any of the committees involved in yesterday’s hearings. Gaetz knew this would happen, and wanted to make a public spectacle in order to craft a narrative, and the media played right into his plan. Ring of Fire’s Farron Cousins explains what happened.

*This transcript was generated by a third-party transcription software company, so please excuse any typos.
Republican representative Matt Gates was tossed out of miss Fiona Hill’s testimony yesterday before she even began because Matt Gates was not a part of any of the three committees who had issued subpoenas to Fiona Hill and Matt Gates knew that Matt Gates knew that he wasn’t a part of this closed door hearing where the Republicans who were there, yes, they were allowed to cross examine her and ask her questions. It’s just that Gates isn’t on those committees, so they didn’t allow him to be in there. They asked the house parliamentarian, Hey, is he allowed to be in here? And this nonpartisan person whose only job it is to enforce the rules said, no, sorry Matt, you can’t be in here. Please leave. And that’s when Matt Gates got everything he ever wanted. See Matt Gates knew that he wasn’t going to be allowed into this hearing and that’s why he went because he wanted to create the optics that Democrats were shutting out Republicans and he got exactly what he wanted and the media played right into his stupid little narrative because immediately after he’s in the hallway giving interviews to reporters saying things like, I thought, you know, I, I’m on the judiciary committee. I should be allowed in here. This is ridiculous. They’re trying to seal us all from the process. No, Matt, you broke the rules and you’re very familiar with that. Except this time daddy wasn’t around to bail you out like he was the other times when you got your DUIs down here in Florida, but the media this time came to your rescue. Putting those microphones in your face, putting the cameras in your face and letting you spout your little lies to everyone in this country, playing the victim while knowing full well that this was the end result that you were hoping for and you got it. You wanted to appease Donald Trump. You wanted to play into his narrative that Democrats are doing something secretive. You had to make a fool of yourself to do it, but she did it. You’ll do anything to appease Mr. Trump and yesterday didn’t disappoint and then later this moron Matt Gates gets on Twitter and he says, judiciary chairman, Jerry Nadler claimed to have begun the impeachment inquiry weeks ago. Now his own judiciary members aren’t even allowed to participate in it again. The parliamentarian came out and said, that’s the rule. Sorry. Oh, abide by it or leave. He continues and yes, my constituents want me actively involved in stopping the kangaroo court coo run by shifty Schiff. Nice alliteration there. Junior. Here’s the thing, Matt, you said your constituents want you to stop this. Guess what I am? I’m actually one of your constituents. I, I’ve lived in this area a lot than you have even though you claim to be a native, but you were actually born in Hollywood, Florida. I think people need to understand that too. You’re not from here. You say you are, but you’re not. You see I am. I’m about fifth, sixth generation, Florida district one. And as your constituent, I can tell you that, no, I don’t want you to obstruct this impeachment inquiry. I talked to a lot of people in this area, probably more than you do because I’m here every day and have been for my entire life. They don’t want you to stop it. You know, a lot of the Trump bumper stickers in this area starting to disappear. Oh, we’ve got a few. We’ve got some hardcore folks who have literally taken markers and written on the side of their car, their support for Donald Trump. But the levels of support for Trump that we see down here in this very red district are nowhere near the levels that we saw from McCain for Romney or for George W. Bush. There are some hardcore Trumpers down here, the likes of which would probably scare the rest of the country, but not as many as we’ve had with any other Republican politician. Gates is wrong and his district is changing, but he’s going to, uh, continue making a complete fool of himself because it makes Donald Trump happy. So just remember that Matt Gates, you’re not being a good Congressman for your constituents. You’re essentially having to act as a jester for the president of the United States.