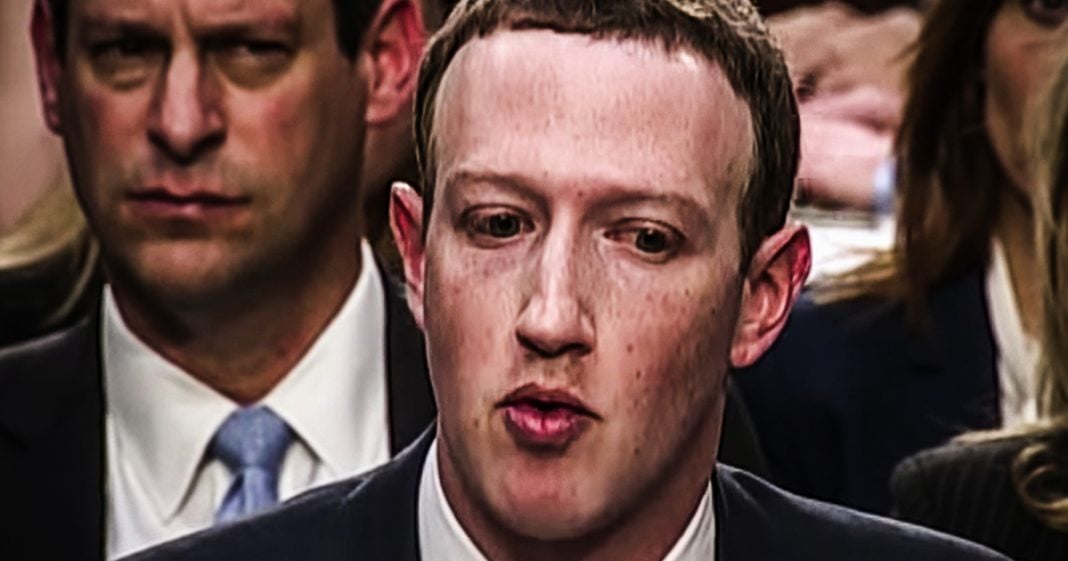 According to a new report by Politico, and confirmed by Mark Zuckerberg himself, the Facebook CEO has been secretly meeting and having dinners with prominent conservative figures in the U.S., including Republican Senator Lindsey Graham and Fox News host Tucker Carlson. Zuckerberg defended his meetings saying that he wants to “build partnerships,” but what he’s really doing is sucking up to those in power to avoid regulations and lawsuits. Ring of Fire’s Farron Cousins discusses this.

*This transcript was generated by a third-party transcription software company, so please excuse any typos.
So yesterday, Politico had that big report that came out that said that Mark Zuckerberg at some of his homes over there in California has been hosting conservatives and Republican lawmakers and talking heads and even a Fox news host to, you know, just kind of chit chat and talk about potential partnerships with these horrible human beings. And these horrible human beings include people like Republican Senator Lindsey Graham, Fox news host, Tucker Carlson and right wing pundit, Hugh Hewitt, among others. Those are some of the people that Facebook CEO, Mark Zuckerberg has been hosting for dinner at his home. And these are the same people on the right who have been whining for a year and a half about Facebook, allegedly censoring conservative voices. This is nothing new though, conservative, not just politicians, but media outlets have long had the ear of these powerful outlets. Look back in the day, and I don’t know if many people remember this, but I think on at least two different occasions, George W. Bush hosted right wing conservative talkers in the white house to have what they called their little a talk radio summit in the oval office. Sean Hannity, was there other conservative talkers and they just kind of talk strategy and policy so that essentially they could all get on the same message, then go back to their various outlets and support. The administration while all being on the same page. Trump does the same thing. He talks to Sean Hannity according to reports nightly. He talks to Lou Dobbs, he talks to other Fox news hosts and it’s so they can all be on the same message and this thing with Zuckerberg is no different. It’s so everybody can get on the same page so that everybody’s telling the same message. This isn’t about befriending enemies, this isn’t about reaching across the aisle and singing kumbaya with one another. This is strategy and that is what Zuckerberg is working on. Zuckerberg lashed out, I guess at the a report and he said, to be clear, I have had dinners with lots of people across the spectrum on lots of different issues all the time. Meeting new people and hearing from a wide range of viewpoints is part of learning. If you haven’t tried it, I suggest you do. Oh Zuckerberg, so that’s a good guy. He just, he just wants to feed people and reach out to other people and see like, Hey, we’re all friends and buddies and it’s not like I’m trying to get you to not go forward with all this antitrust stuff because I’m breaking the law all the time. That’s what this is about folks. That’s what this is about. Zuckerberg is afraid that his little social media empire is about to come crumbling down. He doesn’t care about the alleged Republicans know that that’s not true. Anyway, what he’s doing is he’s buttering up these people to avoid any additional regulations on his lawless company. That’s what’s happening here. Zuckerberg’s a scumbag and his little condescending statement that he put out on Facebook about this story. That’s what proves this guy’s a scumbag. Either that or he’s an absolute idiot and I don’t think he’s an idiot. He is dirty, he is deceitful, and he is doing this on purpose and he is trying to avoid regulations because he’s no, he knows that he has had it too good for too long and the walls are starting to crumble down now. And I hope it happens and I hope the feds come to his company and they break it up with a damn sledge hammer, leaving him with only a sliver of what he had left. And even that would be too much for this guy. Facebook is one of the worst companies in the United States today, and it’s because Zuckerberg designed it to be that way.