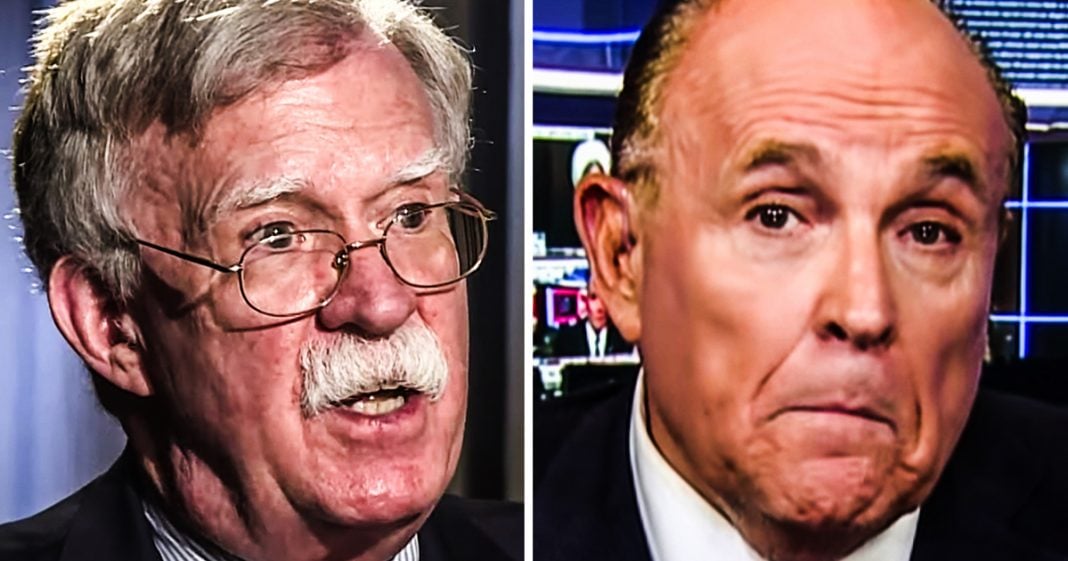 According to testimony on the Hill yesterday, former national security advisor John Bolton tried to warn the Trump administration that Rudy Giuliani was a “hand grenade” that was going to blow everyone up. He knew that Giuliani’s efforts to get the Ukraine to investigate Democrats was illegal and that it would backfire, and it turns out he was absolutely correct. Ring of Fire’s Farron Cousins explains what’s happening.

*This transcript was generated by a third-party transcription software company, so please excuse any typos.
So yesterday, members from three different house committees, her testimony from a former Donald Trump aide by the name of Fiona Hill, who happens to be the former senior director for European and Russian affairs. And during her testimony, Ms. Hill said that John Bolton, Donald Trump’s former national security advisor, John Bolton of all people, was terrified and angry about the administration’s attempts to get the Ukraine to manufacture dirt on democratic opponents of the president. Now, here’s what’s very interesting about this, and we’ll get into the details in just a moment. But John Bolton, you know, the horrible guy who never should have been a part of this administration, the guy who desperately wanted to bomb Venezuela, wanted to bomb Iran, wanted to bomb anybody he could get his hands on, is now suddenly emerging as the hero in this story. That is a twist that I don’t think many people at all saw coming. But I also think that his desperate desire to start all those endless Wars, which was not granted by this administration, I think that is probably what was pissing John Bolton off more than anything. And that’s why he, uh, decided to push back against the administration on this particular issue. So here’s what Ms. Hill told us. Ms. Hill told us that on several different occasions, Bolton got into confrontations with the Gordon Sunland, the ambassador who resigned last week or two weeks ago, excuse me. And it was over the fact that Sunland was working with Giuliani. And according to the testimony, Mick Mulvaney, who’s currently Donald Trump’s chief of staff on working with the Ukraine to again, manufacturer dirt on a Joe Biden and other Democrats. Now here is what, according to Ms. Hill, John Bolton said with regards to those actions, Bolton said, quote, I am not part of whatever drug deal Sunland and Mulvaney are cooking up Giuliani’s a hand grenade. Who’s going to blow everybody up? Now, two separate quotes. That’s not just one weird run on sentence, but that’s how Bolton according to Hill, describe the situation inside the white house. Now, by drug deal, he doesn’t mean an actual drug deal. I think I, I don’t think Sunland and Mulvaney were over there trying to score some crack. But what he’s saying is that it’s an illegal operation, something being done underneath the radar, you know, without the approval of the rest of the administration there they’ve gone rogue is what she testified basically, and they’re doing this on their own in an illegal way. That is what he meant by drug deal. Giuliani being a hand grenade. Yeah, he’s 100% right about that. Giuliani is going to blow everything up, blow everyone up and Giuliani is blowing everyone up. He is now the subject of a criminal investigation. He is while also representing the president taking down the president. So it’s a really weird awkward situation at the moment. But the bottom line is this. We now have this testimony. John Bolton is going to be called to testify because he has now been implicated, not as somebody who was working with them, but somebody who was actively working against them. He told Hill, the woman who testified yesterday that she had to go and tell national security council lawyers about what was happening because it was so threatening to this administration because it was so obviously illegal. John Bolton knows a lot. John Bolton knows what was going on, possibly even more than these aides and whistleblowers who have already come forward. And John Bolton’s got a bit of an ax to grind with this administration because after all, they didn’t grant his wishes for endless war. So this story is just now really starting to get interesting. And by the end of it, we’re probably gonna learn a lot more than we ever thought possible.