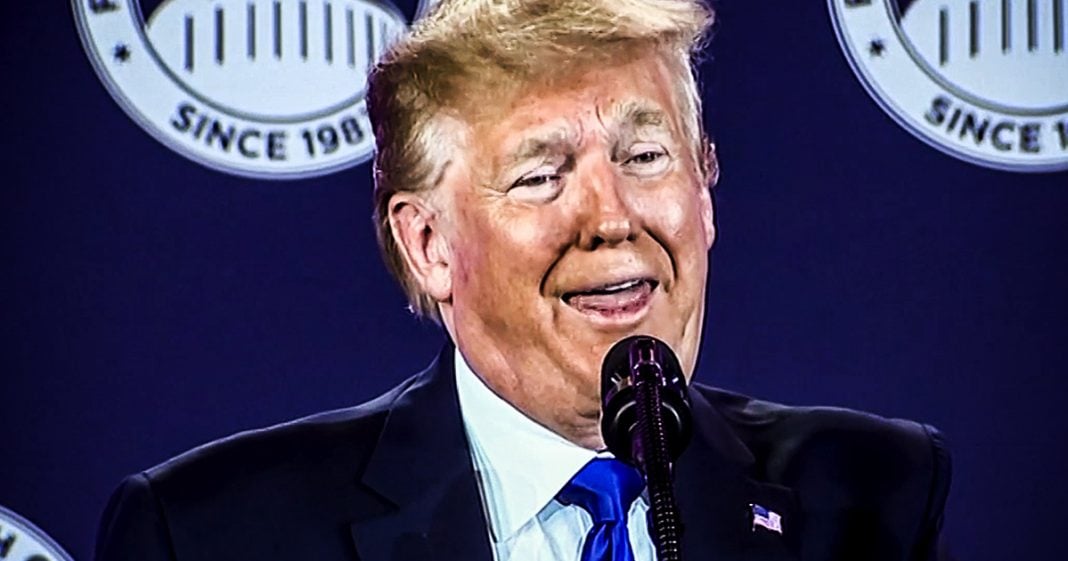 On Saturday evening, while speaking at the Values Voters Summit in Washington, D.C., Donald Trump said that he’s instructed his lawyers to look into suing both Nancy Pelosi and Adam Schiff over the impeachment inquiry that the Democrats are working on. Trump says he knows it’ll fail, but that the American public “will understand” why he did it. Ring of Fire’s Farron Cousins explains what’s happening.

*This transcript was generated by a third-party transcription software company, so please excuse any typos.
On Saturday evening. Donald Trump spoke at the values voter summit in Washington, D C where he laid out his strategy for fighting back against impeachment, and here it is.
[I actually told my lawyers, I said, Sue them anyway, he’s got immunity, but they can’t beat immunity for that. I said, sue them anyway. Even if we lose, the American public will understand.].
That is Donald Trump’s a response for everything folks, Sue them. I don’t care. I don’t care if we’re going to lose, we’re going to Sue them. We’re going to drag this out in court. We’re going to drain them of a little bit of their money having to fight this. We’re going to just make a point by suing them. Donald Trump is the King of frivolous lawsuits and it served him well in business because in business, yeah, that can help. That can work to a degree, especially if you’re a business that has billions of dollars fighting against a business that’s struggling to break $1 million. Yeah. You can draw out a very long court battle with these people over something insignificant, drain them of their resources, then force them to comply with whatever it is you’re trying to get them to comply to. It’s dirty and it’s underhanded, but it’s done all the time in business and Donald Trump knows that because he’s one of the people who did it all the time and he thinks he can still do the same thing with politics. You cannot Sue Nancy Pelosi and Adam Schiff for fulfilling their constitutional duties and yes, folks launching an impeachment inquiry is spelled out in the constitution. They have not done anything that’s unethical. They have not done anything that is illegal or unconstitutional. They’re doing it the way they choose to do it, which is what the constitution says they can do. I don’t understand how Republicans don’t understand that, but the thing is Republicans do understand that. They just don’t think you are bright enough to know that. That’s why they keep saying these things. That’s why they keep having those very weird hallway press conferences where people like Jim Jordan and Liza Sheldon basically have meltdowns every time somebody puts a microphone in front of them cause they say it’s also unfair. I don’t know what’s going on. Nothing illegal is happening with what the Democrats are doing. Donald Trump has no basis to file a lawsuit here, but he had to give those people at the values voters summit something. He had to let them know that in some way he was trying to fight back and that’s all he had. I’ve talked to my lawyers about it. We’re looking into it, looking into what suing people for for doing their job. That is absolutely one of the most ridiculous things that this man has ever said, but the people in that audience ate it up and that’s all that matters to him. He’s not actually going to file a lawsuit again, there’s no for one there. There’s no standing. He doesn’t have a case. It would get tossed before it even finishes being filed, but the people in that audience don’t understand it. The people in that audience don’t know how the system works. The people in that values voter summit audience don’t know what’s in the constitution and Trump wants to misdirect them. He wants to mislead them and he wants to make them think that people like Nancy Pelosi and Adam Schiff are the bad guys. That is their framing now. That is what we’re going to see from this point going forward. We’ve seen Trump attacking Schiff for well over a year at this point for really no other reason than Schiff is going after him. I mean, if you don’t like Adam Schiff, fine, don’t like Adam Schiff, but Adam Schiff has done nothing unethical or illegal and it’s kind of ridiculous to continue harping on this one person when the inquiry actually involves lots of different Democrats but Schiffs a good enemy, right? Donald Trump’s already got his nickname for him. He’s already tweeted about him so much that it just comes pretty natural at this point, but the best part is that none of it is sticking. The polls are shifting. People are supporting this inquiry and Donald Trump continues to go down the tubes because he has no defense of what he has been accused of doing. That’s why he wants to Sue everyone else. That’s why he wants the misdirection, because he knows he’s so screwed that even he can’t defend it.