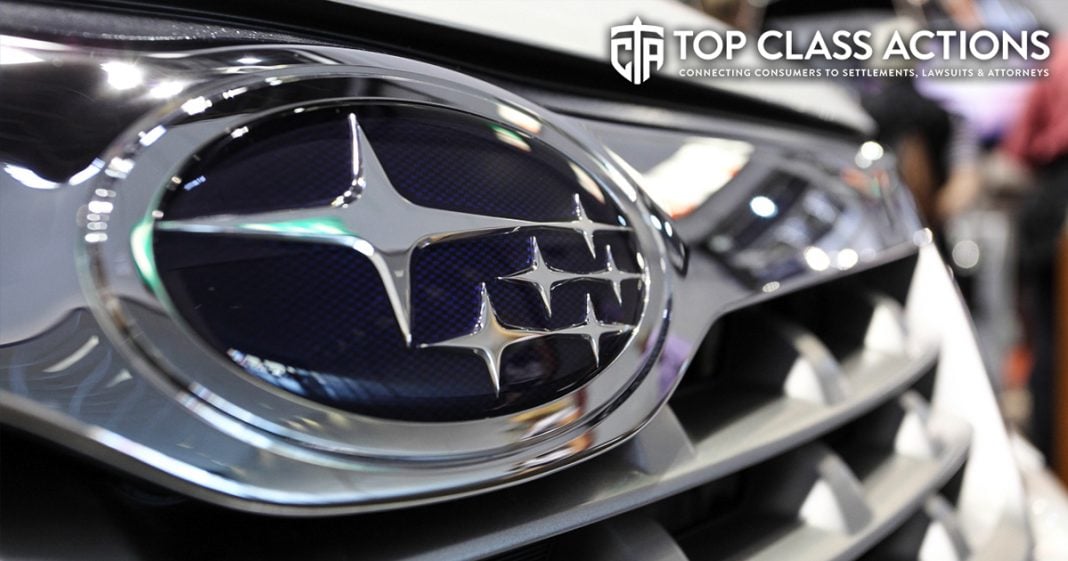 A recent Subaru, Toyota class action claims that repairs made to vehicles as part of an engine recall are only making the issue worse. Toyota and Subaru reportedly recalled around 165,000 vehicles for a safety defect that caused engine stalling. The affected vehicles were to be taken in for repairs so that they could resolve the defect. The original issue reportedly affected the valve springs in the vehicle engines. These springs can reportedly fracture which causes the engine to malfunction and can allegedly result in stalling. Ring of Fire’s Farron Cousins discusses this issue with Scott Hardy from Top Class Actions.

Farron Cousins:                  Having a vehicle that has a defect in it that’s been recalled is a pretty big hassle for most American consumers. But when we find out we do have a recall on our vehicle, we want to get it in, we want to get it serviced. We want to get it fixed so that we’re not driving around a multiple ton vehicle that could basically cause an accident at any moment. But what happens when the recall fix is actually worse than the initial problem? That is the unfortunate scenario that a lot of vehicle owners are dealing with today.

And I have Scott Hardy from Top Class Actions with me now to explain what’s happening. And Scott, this is a, this is a bit of a terrifying story. We’ve got these Subaru and Toyota vehicles, they had an engine recall, so they said, bring it in, we’re gonna fix it. They put in a new part and suddenly people’s engines are catching on fire now. I mean, this is absolutely so much worse than the first problem that they had to recall in the first place. Tell us about this.

Scott Hardy:                          Right. You really nailed it there, that it’s surprising not only that they issued a fix and that this fix is causing more problems, but they issued the fix and then started blaming their customers for having this new problem miraculously after they got the first problem fixed. In this case, we have this recall that affects 2013 Subaru BRZ, 2013 Toyota Scion FRS, 2013 Subaru XV Crosstrek and the 2012-2014 Subaru Impreza vehicles. And so they issued this recall affecting the valve springs in the vehicle engines. The Springs can reportedly fracture, which causes the engine to malfunction and can result in stalling, bad.

So you take your car in there and as the lead plaintiff did, they took the car in there, his 2013 Toyota Scion, got the recall done. But then a week later has a hard knocking in the engine, goes back in. They take a look at the engine and they say, hey, there are metal shavings in your engine. You did this. And he’s like, whoa, wait a second. What are you talking about? They said, well, you did this with the maintenance that you performed on your car. He said, what are you talking about? I took my car in here last week. You guys made major repairs to the engine. Now a week later there’s metal shavings in the engine and it’s my fault when I didn’t touch the engine, what the heck?

Well, it went so far that the dealership said, well, you can pay a specialist to come out here 1500 bucks and they’ll determine whether it’s our fault or not and they wanted to bill him for the loaner vehicle and bill him $6,500 out of pocket to fix it. Come on, give me a break. You know, what do you expect is going to happen when you have this allegedly shoddy repair work done and massive problems are going to happen and you refuse to fix it? You know all Subaru had to do here was say, hey, yes, we recognize there’s a problem. Sorry, we’re going to fix it and you probably would’ve seen this class action, but no, they’re fighting it tooth and nail and now you have more than a hundred or 165,000 vehicles that are possibly impacted by it.

Farron Cousins:                  What’s really interesting to me here is the fact that we’ve, we’ve seen, and you and I have discussed lots of different vehicle recalls. A lot of times it is for something relatively simple that can cause a massive problem like these springs, right? Not, not expensive for the company at all, but they shave a couple dollars here and there by going with a, you know, less superior product. In the end they ended up having to recall them, they replace them. Okay, it’s fine. But this is one of the first times I think I’ve seen where the recall fix was still defective.

So this is interesting to me that they would put in another different faulty piece of machinery here and then as you said, try to turn around and blame it on the vehicle owner’s. Like, no, somehow you, you shaved off the parts of this spring. This, this is crazy. This is absolutely crazy that these companies are trying to pull this.

Scott Hardy:                          Yeah, it’s really shocking. And you would think that Subaru would come out here and just try to work hard and play the positive, the, the, the, the, the positive customer service game and work to fix it. But you can’t have somebody go in for an engine repair and then a week later have major engine problems and say, no, it’s not our fault. You’ve got to be able to take a better look at it, take care of your customers. Because I mean, it looks like a bait and switch scheme. Come in here. We’ll fix your car for free. Come back a week later, $6,500.

Farron Cousins:                  Yeah. I, I do have to say though, I mean, you know, the, this is going to erode a little bit of that trust. You know, it’s, it’s one thing when you have the recall and get it fixed, you move on with your life, no problems. But when you have it cause a second problem after that, there’s gonna be a lot of people out there who suddenly start to think, you know what, maybe this brand isn’t right for me. They had the opportunity to fix it and do the right thing and they failed. You know, everybody gets a second chance, but not a whole lot get that third chance. So this could end up hurting them greatly if they don’t get this taken care of and get it taken care of quickly.

Now, for a full list of the vehicles that Scott mentioned earlier, please follow the link in the description of this video. If you or anyone you know may have one of these vehicles, please send this to them immediately. Scott Hardy with Top Class Actions. Always a pleasure talking to you.