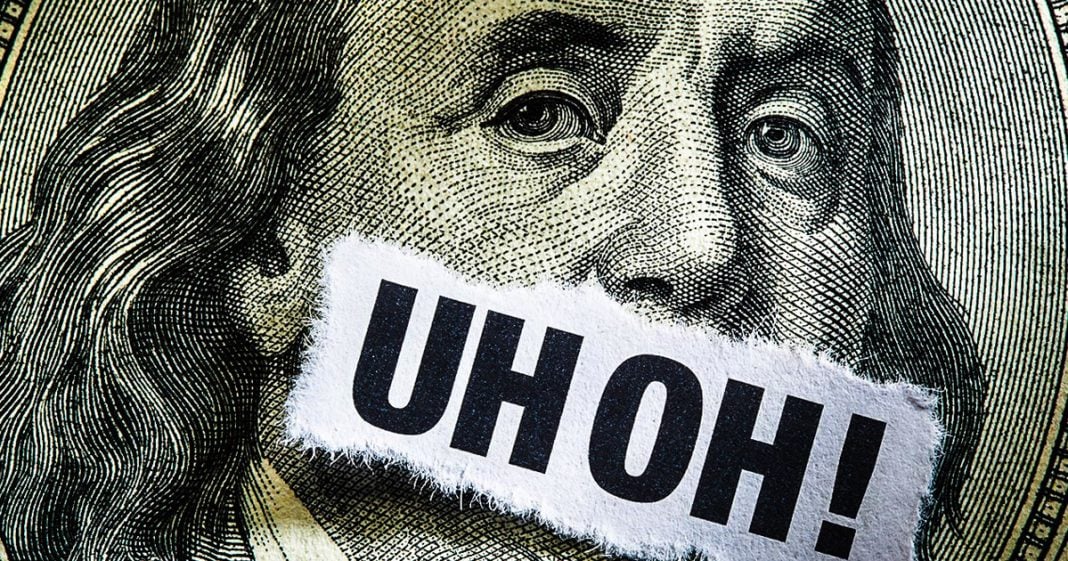 The Treasury Department is being forced to borrow a staggering $1 trillion for the coming fiscal year, after the Republican tax cuts put the budget deficit into a hole that will take years to crawl out of. This amount of spending has only been seen during times when government bailouts were happening, but now this is just business as usual. Ring of Fire’s Farron Cousins explains what happens if these tax cuts for the wealthy aren’t repealed.

*This transcript was generated by a third-party transcription software company, so please excuse any typos.
Well folks, the treasury department is putting on their begging shoes because they’re about to have to go around to other countries and ask for a small loan of $1 trillion for the second year in a row. And the reason they have to go out there and beg and borrow for an extra $1 trillion is because we have a massive budget deficit. We’re spending more than we’re bringing in. And the reason for that is because at the end of 2017, Republicans thought the most important thing on the planet was making sure that rich people got another tax cut. And that’s why we’re in this massive financial hole today that is going to take years for a competent administration to pull us out of. Now here’s what’s really interesting about this folks. Uh, many years ago, first term of the Obama administration, we had to borrow $1 trillion. And the reason we had to borrow $1 trillion is cause Barack Obama came out with his stimulus package to try to kick start the US economy. You know, save the auto industry, save the banking industry for some reason. And he did, and it worked. And we saved those industries. The workers, not so much, but we saved the industries, we saved the businesses, and then we started borrowing less and less. We never hit that $1 trillion Mark again until of course we decided to give wealthy people in this country the biggest tax break they’ve ever gotten. And now we’re in a massive hole. So here’s what’s going to happen. Now if things continue as is with no changes what so ever, we’re going to continue borrowing at least $1 trillion every single year. Therefore, the deficit goes up by 1 trillion every 12 months like clockwork. But Republicans are going to let that happen. They’ve already told us they don’t want that to happen. So what are they gonna do they gonna repeal the tax cuts? No, they’re gonna cut social safety net programs. You know, those programs that we’ve been paying into for our entire lives with every single paycheck we’ve we’ve ever gotten, and they’re just going to take that money away from us. Even though it’s ours, we’ve paid into it. It is essentially an escrow account for US taxpayers. That’s our money and they’re gonna cut it and take it away so they can give it to rich people. They have made that clear that they want to come after these programs. Social security, Medicaid, Medicare, food stamps, everything. They want to cut it slash it, burn it to the ground so they can give that money to the wealthy elite. If we do not repeal these tax cuts, that is where we’re headed. If we do not get rid of these tax cuts, this economy is going to tank faster than ever because of the amount of money we’re being forced to borrow. And all of it. Every single bit of it is 1% because of those Republican tax cuts for the wealthy, those tax cuts that by the way, more than half of the country saw no benefit from guess which half that was. It wasn’t the half at the top. It was the rest of us. We got screwed on this and now because they’re out of money, they’re going to try to screw us again in the future. If and only if they secure a victory in 2020.