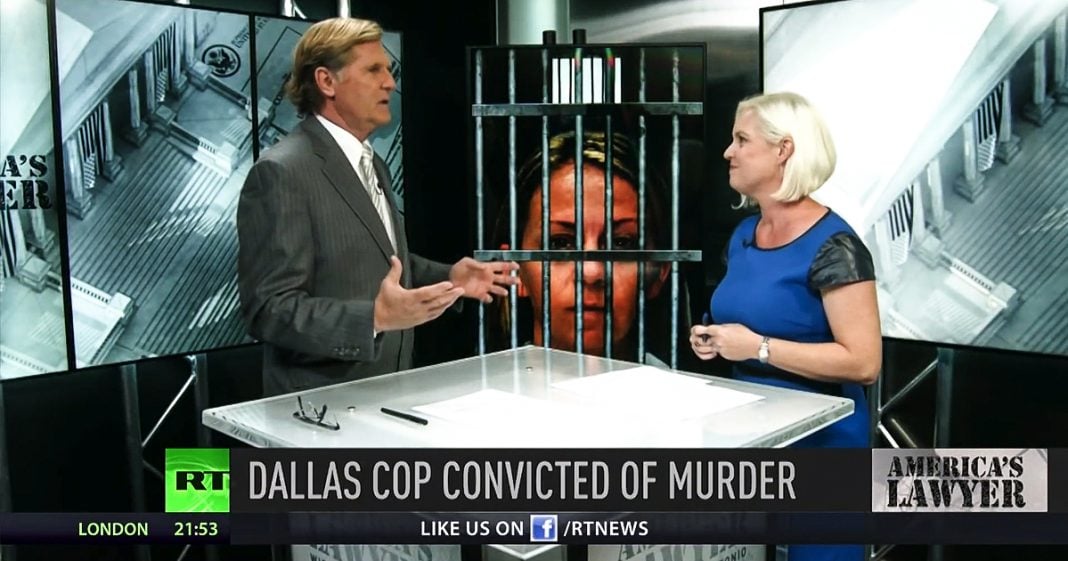 Via America’s Lawyer: Mike Papantonio is joined by legal journalist Mollye Barrows to talk about the sentencing of former Dallas police officer Amber Guyger for the murder of Botham Jean in his own apartment last September. While Guyger’s 10-year sentence may be a win for police accountability, is there a lingering bias surrounding the conviction of a white woman in uniform?

Mike Papantonio:             Former Dallas police officer, Amber Guyger has begun 10 year prison sentence for the murder of Botham Jean, who officer Guyger had fatally shot after mistaking his apartment for her own. Back in September of 2018 is when this occurred, but a few wrinkles during court proceedings have raised eyebrows throughout the media. Legal journalist Mollye Barrows is here to examine this case a little further. You know this honestly, what a weird case.

Mike Papantonio:             I try, you know when anytime I listen to facts like this, I try to analyze it from both sides. Give me your analysis. I, it’s just a peculiar case.

Mollye Barrows:                Well, just to outline the facts for anybody who may be unfamiliar. Like you said, last September, September of last year, she was off duty, but she was still in her uniform. She was headed home to her Dallas apartment complex. Heading into what she said she thought was her apartment, but it was a mistake. She was actually one floor off. She lived one floor beneath the apartment that she accidentally walked into is what she said, and so that apartment belonged to Botham Jean and she said that the lights were off. He had been in there watching football. She thought she was in her apartment and that she shot him because she thought he was a burglar.

So it’s interesting they had the, the guy who lived directly across the hall from the victim testified that he had just met him earlier that day and he was a nice guy. He often heard him singing in his apartment, whether it was gospel songs or, you know, his, whatever favorite music was. And he had heard the altercation. He said it sounded like two people who were surprised by seeing each other essentially. And that, that he heard them talking at the same time and then he heard the gunshots.

Mike Papantonio:             A wonderful person. So now we’re hearing one of the key witnesses in the case that they were actually shot dead.

Mollye Barrows:                Describing who this guy was, like you said, hearing the altercation. So she was just sentenced, but he was shot to death last Friday night outside in a different Dallas apartment complex.

Mollye Barrows:                Of course there are rumors, there’s talk in the community. The Dallas prosecutor handling his case and his name is Joshua Brown, basically said that, you know, he was looking into. Details are sparse, but that he had only praise for Joshua Brown because he spoke up and testified at the trial, which he said is often difficult to find someone who will speak up in cases like this, especially when victims are black or it affects the minority community. In this case, it was particularly, it sparked protests because you have this white police officer who claimed that it was an accident and she was initially only charged with manslaughter.

She walks into the apartment of, wasn’t her place, an unarmed black man. She’s being charged with manslaughter and the minority community was basically like, you gotta be kidding us. You know, what do we have to do to show you that, you know, black lives matter too sort of a thing. And so there was a protest and then she was later charged with second degree, well charged with murder and she was convicted of second degree.

Mike Papantonio:             Everything that happened should have happened.

Mike Papantonio:             But I’m looking at the way the media is handling the sentencing on this. They’re saying it’s sympathetic, it’s forgiving. She’s going, she’s going away for 10 years.

Mollye Barrows:                So the family was very pleased and going back to the sympathy, the compassion, you know, the victims were black. The judge in this case was black. And there was some criticism for the judge because after she handed out this 10 year sentence, she gave the officer a Bible and the woman asked, you know, Amber Guyger asked her for a hug and she said, she kind of stood there for a second thinking this is awkward, and she said that she asked her again and she said, at that point I had to decide, is it my responsibility? This is the judge saying, this is what she told reporters. Is it my responsibility? She goes, I decided then that it was my responsibility to be compassionate as well and the family had also forgiven her.

Mike Papantonio:             Terrible incident that takes place. The family forgives her, an open court goes and hugs her. There’s a lot of parts to this story that, that to me, let real quickly.

Mike Papantonio:             What is her best argument on how this happened? What, what is it that caused her to go and start firing?

Mollye Barrows:                You know, she wasn’t drunk. Her toxicology reports came back clean. She basically says she was distracted. The prosecution didn’t buy it because they said there were several indicators that should have, you know, made her realize that she wasn’t in the right spot. He had a red doormat at his door. She didn’t have one.

Mollye Barrows:                She’s said her key, she had just come off work. That’s why she was still in uniform, but she was off duty. And they think that that’s partially why the jury was more willing to convict in this case because had she been on duty, typically juries are less inclined to second guess an officer’s decision in the line of work of when they decided to shoot.

Mike Papantonio:             Come off of night shift, walks into the wrong apartment and opens fire.

Mollye Barrows:                And as a former prosecutor, it’s gotta make you feel good to see that there is, because usually things like this will destroy a family.