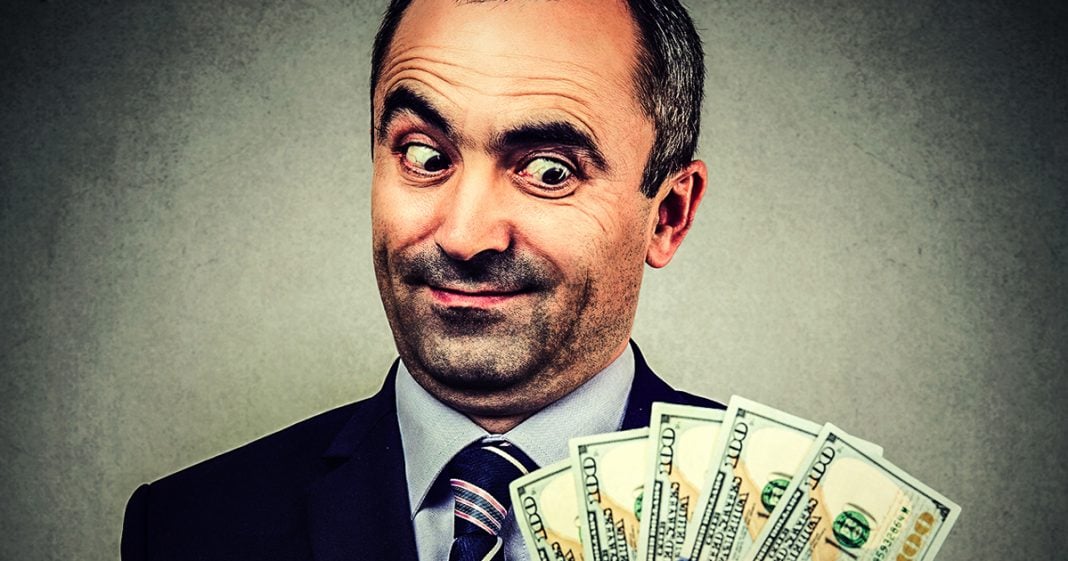 If you have any doubt as to why Donald Trump wanted to be president, all you have to do is look at his policies. Everything he does enriches himself, and his latest proposal to make it easier for corporations and wealthy people like himself to hide money in offshore tax havens is no exception. This is a disgusting move by this administration that will further starve our country of the revenue that it needs. Ring of Fire’s Farron Cousins discusses this.

*This transcript was generated by a third-party transcription software company, so please excuse any typos.
Everything that Donald Trump has done since taking office as president of the United States has been to put more money in his pockets. Bottom line folks, that is what this entire presidency was about. From day one. The man wanted more money, wanted more power, and he found a way to do it. He’d conned enough people in this country to vote for him and now that’s exactly what he’s doing. In addition to benefiting greatly from the tax cut and jobs act of 2017 Donald Trump has now charged Steve Minutian the secretary of the treasury with loosening the rules on how corporations can go hide money off shore. Here is a, here’s what it says. According to Bloomberg, treasury department is taking aim at regulations intended to prevent American firms from lowering their US tax bills by shifting income to their offshore branches that they can loan to their domestic branches and deduct the interest off their internal revenue service bills. The move could make it easier for companies to use accounting tactics to minimize their US earnings and inflate their foreign profits. To put it in a nutshell to get through all the, you know, economic terms. When you make your income, you immediately ship it to your offshore tax Haven down there in the Cayman islands, just the little post office box, there’s one building that has hundreds of them. That’s where they all live and that’s where your income goes. So you’re not owed US income taxes, but then your company obviously needs money to operate. You get that money from your profits, you then loan yourself the money and then you get to write off your interest on it as you pay yourself back on money that you’re already not paying taxes on. That’s what this administration is trying to put in place. There is currently more than $2 trillion being held by US corporations offshore out of the reach of the IRS, and the country is losing 184 plus billion every single year by not being able to tax that money. Meanwhile, we’re running a deficit now that’s hit over a trillion almost and Republicans still claim to be the party of fiscal responsibility. Isn’t that a bit of irony folks. They don’t care. They don’t care at all. They want to do whatever. They can change whatever rules they have to change to make sure that corporations and their wealthy donors don’t ever have to pay their fair share in taxes. Yeah, they benefit from getting our military to protect them. They use our roads and infrastructures. Our police officers protect them. Our fire departments that our tax dollars pay for are right there when their factory blows up because they didn’t follow OSHA regulations, but they don’t want to pay for any of it. that is the problem with corporations today. That is the problem with Republicans today. And that is the problem in general with wealthy people in this country. Donald Trump is doing this because he knows he can make a pretty penny off it. Republicans are supporting it because they know that their corporate donors are gonna make a ton of money off of it. And I guarantee you there’s plenty of, uh, corporate Democrats who are also supporting this as well. We already charge one of the lowest tax rates in the industrialized world for corporations. I know on paper it may look big, but the effective tax rate for corporations is typically in the low teens, but even that’s too much for corporations. Even the tax cut they got from 2017 that lowered their taxes to 21% even that is still too high for corporations. Anything higher than the number zero is going to be too high for American corporations. So let’s cut the crap. Let’s stop saying that. Oh, we’ll cut their taxes. They’ll bring their money back. Well, we did cut their taxes. It’s been two years in. All they’re trying to do is find new ways to hide their money offshore again, because anything higher than the number zero for a tax rate is just too darn much for a corporation to want to pay.