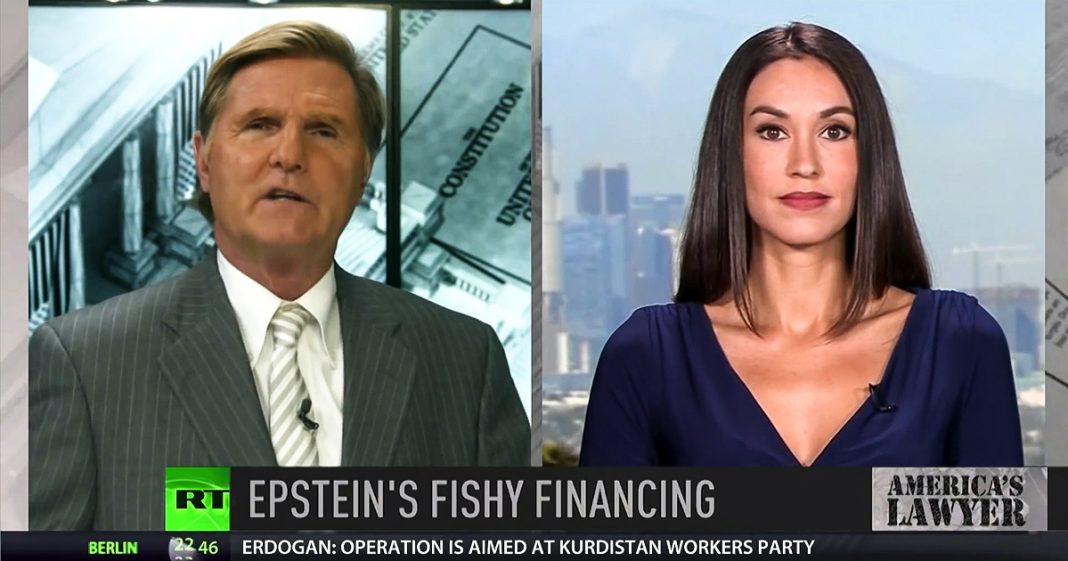 Via America’s Lawyer: RT’s Brigida Santos joins Mike Papantonio to break down a report showing how Jeffrey Epstein’s company Southern Trust managed to secure over $200 million in funding even AFTER he’d been convicted of pedophilia.

Mike Papantonio:             Newly disclosed financial statements reveal the Jeffrey Epstein’s company raked in nearly $200 million in revenue after, after he was convicted of soliciting a minor for prostitution. The documents provide a glimpse into the mysterious finances of the deceased sex offender. RT’s, Brigida Santos joins me now from Los Angeles with the story. Brigida, what can you tell me about Epstein’s company, this Southern Trust where all this mysterious money seems to be rolling in?

Brigida Santos:                   Well, Epstein launched Southern Trust in 2012 just years after his 2008 conviction for soliciting a minor for prostitution. It operated out of an office in the Virgin Islands and allegedly worked on developing a DNA mining service to help pharmaceutical companies reduce the need for clinical trials. The company was Epstein’s attempt at rebranding himself and rebuilding his business after his previous company, Financial Trust, suffered massive losses in the financial crash and lost its biggest client. Epstein was also trying to rehabilitate his image after registering as a sex offender. Southern Trust ended up earning him nearly $200 million in revenues over a five year period, despite all the scandals surrounding him.

Mike Papantonio:             Yeah. Epstein had this love affair and they seem to have a love, love affair with Epstein, with MIT, Harvard, Yale. It’s like, it’s like they’re, whenever he asked for money or whenever they asked him for money, there was always this access that he was able to build and all of a sudden he’s going to be this science guy. But then when you take a look at the interviews that they did with some of these folks involved in these, in these creepy little projects, you understand they all regarded him as a little, as a dope. I mean, somebody who had no insight at all into the scientific issues that, that he was trying to put himself out front on. Who was, who was paying Epstein all this money Brigida?

Brigida Santos:                   Well, that’s a great question. It’s still unclear. We don’t know what kinds of customers Epstein worked with after switching from Finance to this new alleged DNA research company. What we do know based on the documents is that Epstein likely switched his company’s focus to avoid registering with federal securities regulators as required under the Dodd Frank act. Now, if Financial Trust did not manage money, it would not have to register, even though Epstein told officials that the company would still have a financial arm. In 2013 Southern Trust also earned him a 10 year 90% tax break from the Virgin Islands economic development commission. So he really knew how to game the system, go through loopholes and make money work for him.

Mike Papantonio:             Well, here’s the interesting thing. Any, most of the time, for example, in this law firm, we always want to know who we’re doing business with. It doesn’t take anything but a little bit of due diligence to find out this man wasn’t just accused of one incident, he was a pedophile. For all practical purposes, anybody looking into the story knew that he was a pedophile, knew that he had been given a sweet heart deal by the DOJ for no good reason, understood all the facts that he was having sex with 14 year old girls.

And nevertheless, these science organizations thought it was interesting enough to say, hey, let’s listen to him. And you know what? Maybe it’s a two way street. Maybe we get more money from Epstein and we give him money on the back end of it. It’s, it’s, it’s gonna be interesting to be able to follow this money. It’s also been revealed that Epstein secretly owned a second private Island in addition to a little St James in the Caribbean. What can you tell me about that?

Brigida Santos:                   Epstein acquired his second island known as Great St James Clay after tricking the owner into thinking that the buyer was a Dubai businessman tied to the Royal family. Now Epstein did this because the owner of that Island did not want to do business with Epstein after hearing testimony from underage victim after underage victim. So Epstein set up an opaque limited liability company to secure the $22.5 million sale. The Dubai businessman whose name Epstein used, that man said that he forbid Epstein from using his name on the shell company, but that Epstein did not listen. Now even with these new details, the mystery behind how Epstein made his fortune remains.

Mike Papantonio:             Well, you know, the real part of this story that’s, it’s becoming more and more troublesome is it’s all of these names that were attached to the Epstein ugly, ugly story. Now, after his death, the media, it’s like the typical corporate media. There’s not a shiny thing there anymore. They’ve revealed the names. You know, we’ve seen Dershowitz. We’ve been seeing Bill Clinton, we’ve seen Trump. I could go on, you know, Prince Andrew, we can go on forever, but all of a sudden the media is not paying attention to it anymore and that’s where the story is.

The, the, the follow-up to this story ought to be, why is it that MIT allowed Epstein to give so much money to MIT after they understood that the guy was a hopeless chronic pedophile that should be in prison? Why did Harvard do that? Why did all these science organizations say, yeah, his money’s just as good even after we knew that he was a pedophile? It’s still a mystery to me. Maybe you can shed some light on it, Brigida. Why is it that we have a culture that was so accepting of this disgusting pedophile, simply because he had some money up front? What’s your take?

Brigida Santos:                   Unfortunately, money does drive everything, especially at these schools. You know, the former director of the MIT media lab said that he would take the money even today, and knowing what he knows about Epstein. It seems like they need this money to do their research and they don’t care where it comes from.

Mike Papantonio:             Yeah. Well that’s sure played out itself on the Epstein story, but this is another angle and that is where is this mysterious $200 million coming from? Who’s keeping Epstein alive after they know that he’s a disgusting pedophile? Thank you for joining me.