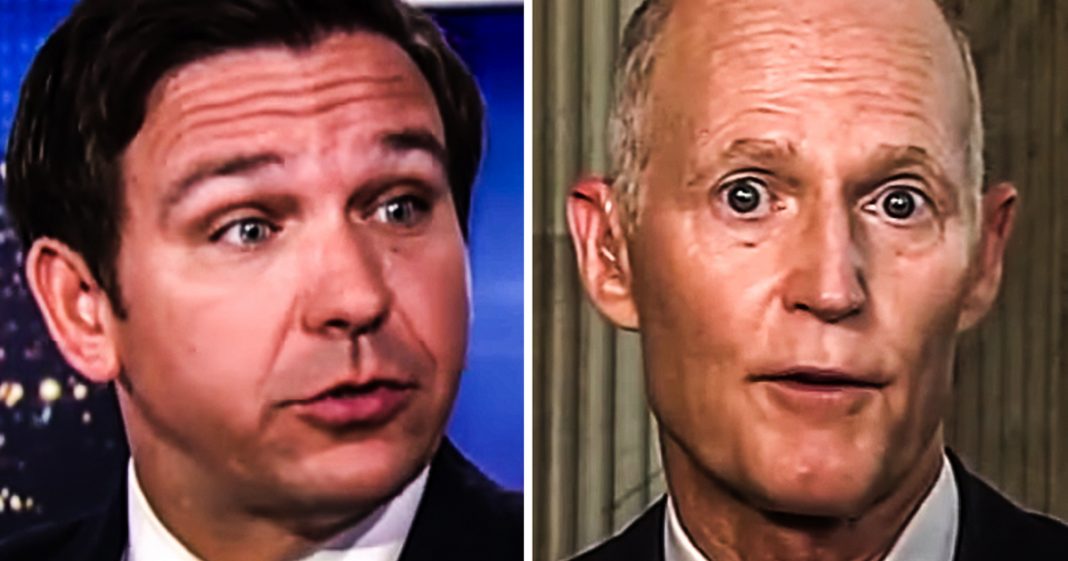 Florida Republicans are terrified about the prospect of having a new group of voters join the state’s ranks, and that’s why they instituted a modern day poll tax, forcing these former felons to repay all court costs and fines before they can get their right to vote back. The only problem is that the state apparently has no system in place to track who owes what, leaving nearly half a million people unsure of whether they owe anything at all, and they’re now too afraid to attempt to register to vote. Ring of Fire’s Farron Cousins discusses this.

*This transcript was generated by a third-party transcription software company, so please excuse any typos.
So it was nearly a year ago when Florida voters went to the polls. They passed the amendment by almost 65% approval that gave former felon their right to vote back here in the state of Florida, 1.4 million people, former felons in the state of Florida. Prior to that, we’re not allowed to vote thanks to a Jim Crow era law that was 150 years old that prevented former felons from being able to cast the vote. Last November. Voters in this state of Florida overturned it and said, we’re done. We’re going to let these 1.4 million people vote and immediately as we discussed at the time and have discussed since then, Florida Republicans started freaking out because even though the state itself sometimes votes blue in the presidential races, our state government has been solidly Republican for nearly my entire life. Occasionally we get a democratic governor, but the state house and Senate, it’s solid Republican. But these Republicans also knew at the time that, Oh, we got 1.4 million new voters coming, and even a tiny fraction of that, less than 10% would be enough to quite literally flip every single national election that this state has had, including the state governor elections. Every single one of them would have flipped the other way if those voters had shown up and voted for Democrats, we’re screwed. Basically Republicans said. So they instituted this modern day poll tax and it says that if you’re a former felon before you can register to vote, before you get that right back, you’ve got to go back and pay all your court fines, pay all your court costs. You’ve got to do all this. You gotta pay all this money that we know you don’t have. So best of luck getting your right to vote back. Republicans passed that, uh, governor Rhonda Santas, who is a huge Trump supporter, sign that back in June. And here’s the problem, aside from it obviously being a modern day poll tax, the state also conveniently doesn’t have any kind of centralized database showing who owes what. Apparently the state and the Republicans knew this when they passed the bill. They don’t keep track of that. That’s up to you, former felon who’s just trying to get your life back on track. You should know what you owe. I mean we’ll find out if you do try to vote, but you owe something cause we’ll definitely go and cross check that. But in terms of us telling you what you owe you, Oh man, you’re silly. You go do that. You have to go back to the courthouse where you were convicted. Go through the documents, see what’s owed. Oh and by the way, reports have also found the lawyers for these people have also found most of those reports are inaccurate, outdated, or simply don’t exist. We have nearly half a million people right now in this state out of the 1.4 million trying to get the right to vote back. They don’t know what they owe. They don’t know where to pay it. They don’t know how to pay it. They don’t even have the money to pay it, but more importantly, they don’t know what they owe because the state failed them in this state knew they failed them and that’s why they did it because they knew these people would never get it back because the second these people register to vote and start showing up at elections. The Republican era in the state of Florida is over. There is a little bit of good news through July of this year, 336,000 new voters have been registered in the state of Florida. 45,000 of those African Americans just the 336 new voters. If half of them voted for Democrats, every election in this state would flip from Republican to Democrat. That’s how powerful one vote can be because it’s not just your one vote. It’s the one vote of everybody next to you and that’s what Republicans are afraid of. They’re afraid of people understanding how much power they have, and that is why they have fought tooth and nail to prevent these former felons from actually being able to get their lives back.