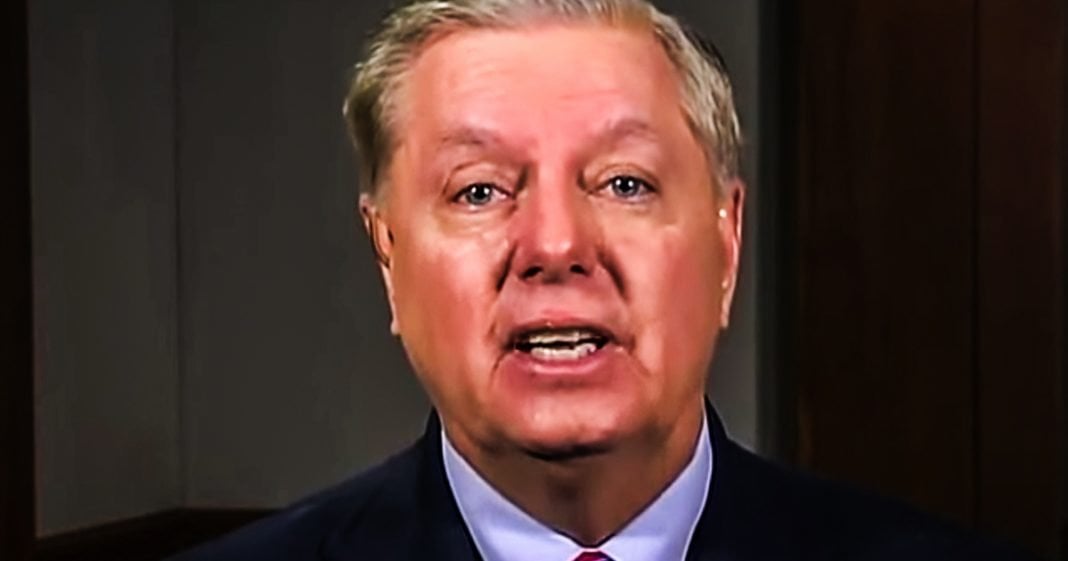 Republicans don’t seem to understand how the Constitution works, and their latest impeachment talking point is proof. Republicans are now out there claiming that impeaching Trump would nullify his election, therefore taking the votes of the people away from them. That’s not what’s happening, and impeachment is clearly a Constitutional remedy to remove a bad President. Ring of Fire’s Farron Cousins discusses this.

*This transcript was generated by a third-party transcription software company, so please excuse any typos.
So there’s a lot of Republicans who are remaining silent on the issue of impeachment. You have a couple including Mitt Romney who’ve come out and offered very vague and as I’ve said, very polite criticisms of the president, but then you have some of the craziest of the crazies and that includes Donald Trump himself who have actually been out there arguing for the last two weeks that if you impeach a president, what you’re really trying to do is nullify an election. You’re undoing the will of the people. You’re taking their vote away. If you impeach president Donald Trump, Donald Trump has said it. Lindsey Graham said it, Marco Rubio is hinted at it. Ted Cruz is hinted at it. Jim Jordan has flat out said it and pretty much everyone on Fox news and their opinion section has said that you’re nullifying an election and some of the folks on Fox news and some of the other folks I’ve mentioned there have gone even further calling it undemocratic. It’s undemocratic to impeach the president of the United States according to some of these Republicans. Now. That’s interesting because anytime we on the left mentioned somethings undemocratic, they say, well ha ha, it’s because we are a democratic Republic. So being undemocratic is not concerning to us. You know, it is concerning to everybody though violating the US constitution and or being so stupid that you don’t understand what’s actually in the constitution because believe it or not, folks, article two of the United States constitution, that’s where impeachment is spelled out. It’s in that document. You know the document that Republicans claim to love, love it so much they’d sleep with at night if they could roll up next to him under the pillow. It’s in there. It’s not undemocratic. It’s not undoing an election. It’s not nullifying any results. It’s a remedy put in this document by the founders of this country because they knew eventually we were going to have a piece of crap sitting in the oval office and we needed to have a way to get them out of office, impeachment. What was something that these founders took very seriously and in fact, they took their idea for impeachment and the process for impeachment from old laws from Britain, and they made it intentionally vague. They didn’t want to pigeonhole the Congress into any kind of thing saying the president has to meet criteria a, B, C, D, E, F, and G before you can’t impeach him. They intentionally left it vague because some things are really bad but not illegal. Some things are damaging to the United States, but not quite illegal. And that is why Donald Trump, whether or not he actually broke a specific law in this instance, he did by way, but even if he claimed he didn’t, you can still be impeached for it. And again, the Republicans out there trying to argue that this nullifies an election. It’s just democratic, sour grapes. That’s not what’s happening here. Bill Clinton was impeached. Did that nullify an election? No. No, it didn’t. If Nixon had been impeached, if he hadn’t resigned and actually went through the impeachment process, would that have nullified an election? No. What it would’ve done just like it did with Clinton and just like it will be doing now, is holding those in power accountable for their actions. Maybe it results in them being removed from office. Maybe it doesn’t, but we’re going to go through the process as laid out in the United States constitution, and then then once that process is over with whether Democrats get the outcome they want or not, then we can all move on. And I think at the end of this, that is what everybody is going to want.